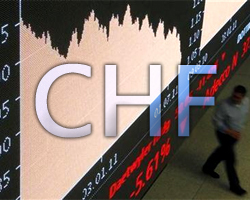 The Swiss franc weakened against its major opponents in the European session on Thursday amid risk appetite, as investors await U.S. retail sales data for more clues on stimulus outlook.

Retail sales are forecast to decline 0.8 percent on month in August, following a 1.1 percent drop in July.

A weak data could back hopes for a delay in tapering of the Fed's bond buying program.

The Fed meeting is in focus as markets seek clues on the central bank's next policy moves amid weak data and virus concerns.

The United Nations said that the global economy is expected to grow at the fastest in nearly five decades this year.

The report highlighted a "possibility of a renewal of multilateralism", pointing to the United States support of a new special drawing rights allocation, global minimum corporate taxation, and a waiver of vaccine-related intellectual property rights.

Looking ahead, U.S. retail sales for August, business inventories data for July and weekly jobless claims for the week ended September 11 will be featured in the New York session.