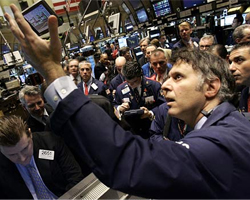 The U.S. dollar, which drifted lower in the European session, recovered and gained in strength subsequently, riding on strong consumer confidence and new home sales data.

Meanwhile, traders looked ahead to upcoming monetary policy meetings of the European Central Bank(ECB), the Bank of Canada and the Bank of Japan.

The ECB is expected to take a dovish stance when it meets on Thursday. Central bank meetings in Japan and Canada are also scheduled this week.

The U.S. Federal Reserve meets next week, and it is likely that the U.S. central bank will announce plans to begin scaling back its asset purchase program.

The Pound Sterling is little changed against the dollar, fetching $1.3765 a unit.