If there is a market that has succeeded while many others have failed amid the global recession, it is the foreign exchange market.

Forex has been increasingly popular over the past decade, moving from an outsider practice to a viable alternative to mainstream trading. This is partly attributable to the current uncertainties in a variety of major currencies and partly due to the failures of other trading markets since the downturn.

One of the key benefits of Forex investors have discovered over traditional share trading is transparency. Companies often keep news that will affect their share price closely guarded until an opportune time, participants of currency markets tend to be far more open. This is a lesson that has been hard learnt. 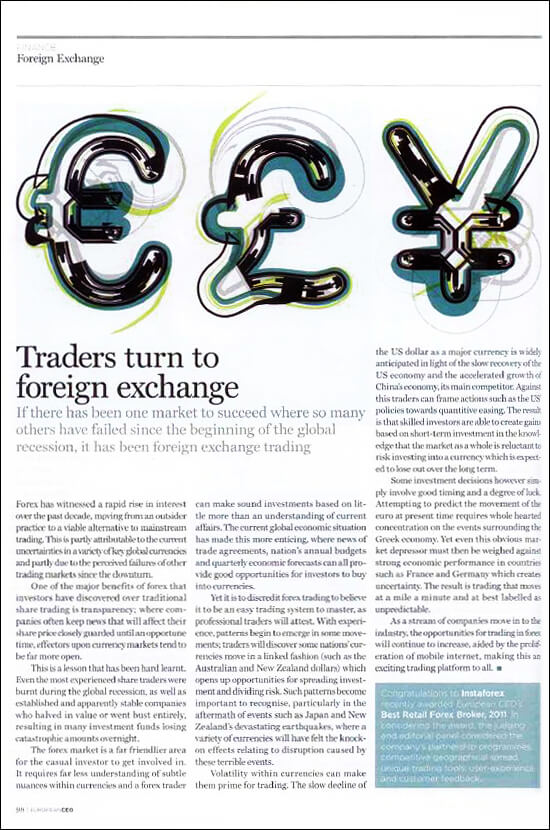 Even the most experienced share traders were burnt during the global recession, as well as established and apparently stable companies that halved in value or went bust entirely, ending up in losing catastrophic amounts overnight. Forex is a far friendlier area for the casual investor to get involved in. It requires far less understanding of subtle nuances within currencies, and a Forex trader can make sound investments based on little more than understanding of current affairs. The current global economic situation has made Forex more enticing, where news of trade agreements, nation's annual budgets and quarterly economic forecasts can provide good opportunities for investors to buy into currencies. Even though professionals will attest that trading is equally easy to master for both experienced traders and beginners, this point of views is to be discredited. With experience, patterns begin to emerge in some movements; traders will discover sonic nations currencies move in a linked fashion (such as the Australian and New Zealand dollars) which opens up opportunities for spreading investment and diversifying risk. Such patterns are important to recognize, particularly in the aftermath of such events as Japan and New Zealand devastating earthquakes, when a variety of currencies have felt the knock-on effects relating to disruption caused by these terrible events. Volatility within currencies can make them prime for trading. The slow decline of the US dollar as major currency is widely anticipated in light of the slow recovery of oldie US economy and the accelerated growth of China economy, its main competitor. Against this traders can frame actions such as the US policies towards quantitive easing. The result is that skilled investors are able to create gains based on short-term investment in the knowledge that the market is reluctant to risk investing into a currency which is expected to lose out over the long term. Some investment decisions, however, simply involve good timing and a degree of luck. Attempting to predict the movement of the euro at present time requires wholehearted concentration on the events surrounding the Greek economy. Yet even this obvious market depressor must then be weighed against strong economic performance in countries such as France and Germany which creates uncertainty. The result is euro trading that moves at a mile a minute and at best labelled as unpredictable. As a stream of companies move into the industry, the opportunities for trading on Forex will continue to increase aided by the proliferation of mobile Internet making it an exciting trading platform to all.