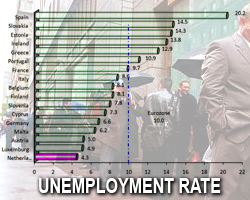 The unemployment rate fell to 5.7 percent in July from about 5.9 percent in June. The rate was forecast to fall marginally to 5.8 percent.

The number of people out of work decreased 91,000 from June, while economists' had forecast a moderate fall of 28,000.

Data released by Destatis earlier in the day showed that the jobless rate remained unchanged at an adjusted 3.7 percent in June.

After adjusting seasonal and irregular effects like sharp falls due to weather conditions or strike, the number of unemployed stood at 1.58 million, which was a slight decline of 1.2 percent on May.