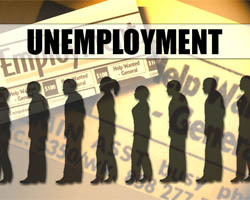 The euro area unemployment rate increased only moderately in April despite containment measures implemented to prevent the spread of coronavirus, or Covid-19, across member countries.

The jobless rate rose to a three-month high of 7.3 percent in April from 7.1 percent in March, data from Eurostat showed Wednesday. But this was below economists' forecast of 8.2 percent.

The number of unemployed increased by 211,000 from March to 11.919 million in April. The unemployment rate among euro area youth aged below 25 rose to 15.8 percent in April from 15.1 percent in March.

Massive filings for short-time work schemes across the Eurozone have subdued the increase in unemployment, Bert Colijn, an ING economist, said.

As the recovery is likely going to last for quite some time, unemployment is set to rise significantly although short-time work will help output to recover more quickly once demand returns, the economist noted.

Andrew Kenningham, an economist at Capital Economics, said the remarkably small increase in unemployment in the euro-zone reflects the success of the government job subsidy schemes and an exodus from the labour force in Italy.

"We suspect that the unemployment rate will rise further in the coming months, but not as far as we had feared," Kenningham added.

Meanwhile, Italy's jobless rate decreased to the lowest level in more than twelve years in April.

The jobless rate fell to 6.3 percent in April from 8.0 percent in March, the statistical office Istat reported. Economists had expected the rate to rise to 9.5 percent. A similar lower rate was last reported in November 2007.

The number of jobseekers decreased to 1.543 million in April from 2.027 million in the preceding month.

Elsewhere, data from the Federal Labor Agency showed that German unemployment rose by 238,000 to 2.875 million in May. Economists had forecast an increase of 200,000.

The jobless rate climbed to 6.3 percent in May from 5.8 percent in April. This was also above economists' forecast of 6.2 percent.

The labour market remains under a lot of pressure due to the coronavirus pandemic, Labour Office head Detlef Scheele said.

In a report released Tuesday, the ifo Institute said about 7.3 million employees in Germany were on short-time work in May. During the financial crisis, short-time work peaked in May 2009 with just under 1.5 million people affected.