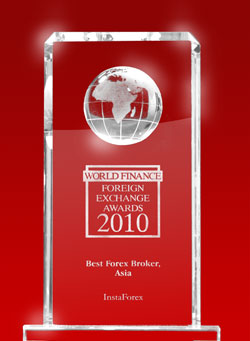 The international company InstaForex is strengthening its leadership on Forex, implementing top-notch trading instruments, modern technologies of trading and widening the line of services. The high growth pace, development dynamics in all directions as well as the reliability and safeguard of InstaForex Company has been already appraised by over 500,000 of customers.

The success achieved by InstaForex recently was estimated not only by traders and partners, but also by the major business magazines in Europe. For the second consecutive year an authoritative British magazine World Finance named InstaForex Company “Best Broker – Asia” under the framework of a significant financial world award “World Finance Award”.

The awards Best Broker – Asia,2009 and 2010 have become the reflection of the company’s expansion in many directions as well as of its stability.

InstaForex expresses gratitude for the honor which the organizers of the award represented by “World Finance” have granted to our Company, as well as to thousands of traders who voted for InstaForex, having joined us.

You can be conversant with the voting totals, and the whole article about InstaForex Company awarding with "The Best Broker in Asia 2010" title adjudged by The World Finance magazine right now using the link to the electronic magazine version on open access.

Awarding and interview with InstaForex representative

The expert group of a leading business magazine in financial, economic and policy field – World Finance, managed by the most prominent professionals in the financial sphere declared InstaForex Company as a winner in the award for the nomination Best Broker in Asia - 2010 on the following criteria: 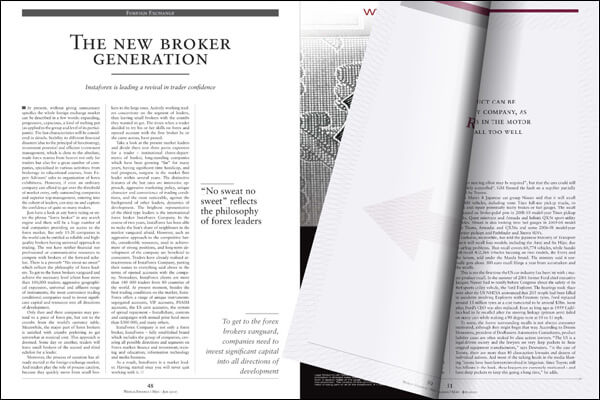 Awarded journalists, reporters, analysts and experts of the entire world are the editorial staff of World Finance magazine. The magazine is distributed all over the world; the leading representatives of business are its readers. The jury, which gives independent awards of World Finance magazine, used different criteria for determining the most deserved nominations of 2010. Thus, during the voting it was necessary to estimate innovativeness and originality of a company, the ability to run projects, competitive ability and market leadership, and also the evidence of development as well as transparency of activity. Concerning all enumerated criteria InstaForex Company was the first among other finalists in the nomination "Best Broker of Asia", confirming its high status.

InstaForex Company appreciates this honour and confidence and thanks organizers of the World Finance Awards represented by the international financial magazine World Finance, our clients and partners, who voted for the company, and also our team for the achieved results.