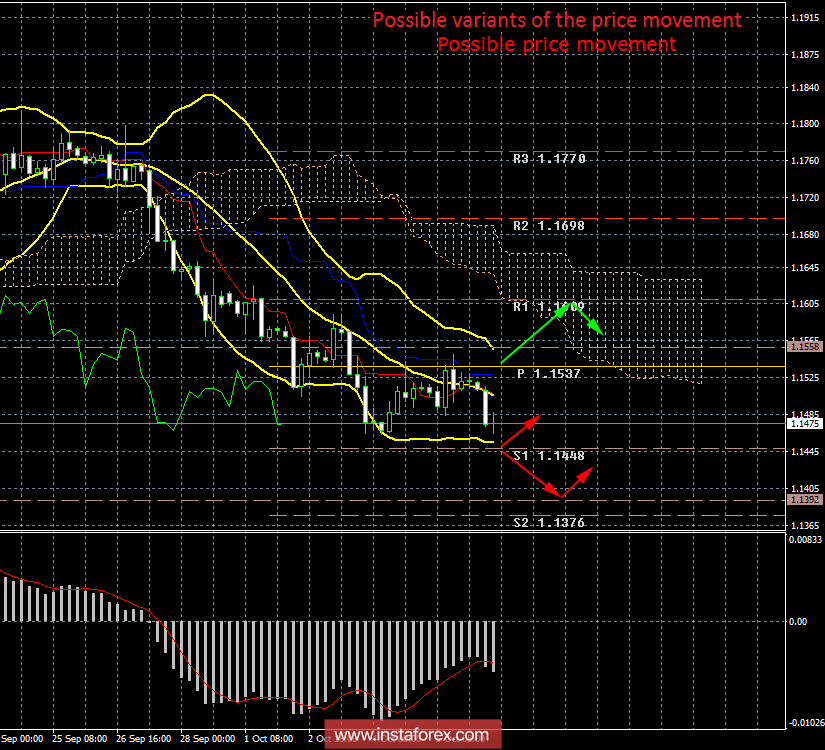 Having worked perfectly within the upward correction of the critical Kijun-sen line, the pair rebounded from it and resumed the downtrend on the first trading day of the week. The first target for the downward movement is the support level of 1.1448. There were no important macroeconomic publications during the day. As you can see, traders quickly recovered from the failure of Nonfarms Payrolls, released on Friday, and not particularly upset because of the low value of this indicator. Thus, most of the market is still looking to the "south". No new data on the trade conflict have been received recently. From the European Union, too, no news, except such "a creak", but the progressing negotiations on Brexit with London. Based on this, there were no special reasons for the strengthening of the US currency today. Nevertheless, the dollar is growing, so the only logical reason for this process may be the general predisposition of the market to buy the dollar. Of course, you can always find a number of indirect reasons, such as the high yield of US government bonds, which increases the demand for the US dollar. Or a well-maintained stock market. However, if these reasons were paramount, the US dollar would always grow. Now the question arises again, what is Donald Trump going to do with the dollar growth that does not stop after the Federal Reserve meeting? Will we see a new scandal involving Trump in the near future, which often has a negative impact on the US dollar?

For the EUR/USD pair, the price bounced off the Kijun-sen line and resumed its downward movement. Thus, it is now recommended to stay in short positions with the target of 1.1448. If this target is overcome, the next target will be the level of 1.1392.

It is recommended to open buy orders only after traders have overcome the Kijun-sen line. In this case, there will be grounds for changing the trend direction of the pair to an upward resistance level of 1,1609 with the first target.