06.07.202206:38 Forex Analysis & Reviews: Forecast and trading signals for EUR/USD for July 6. COT report. Detailed analysis of the pair's movement and trade deals. Euro held on for a long time, but eventually collapsed 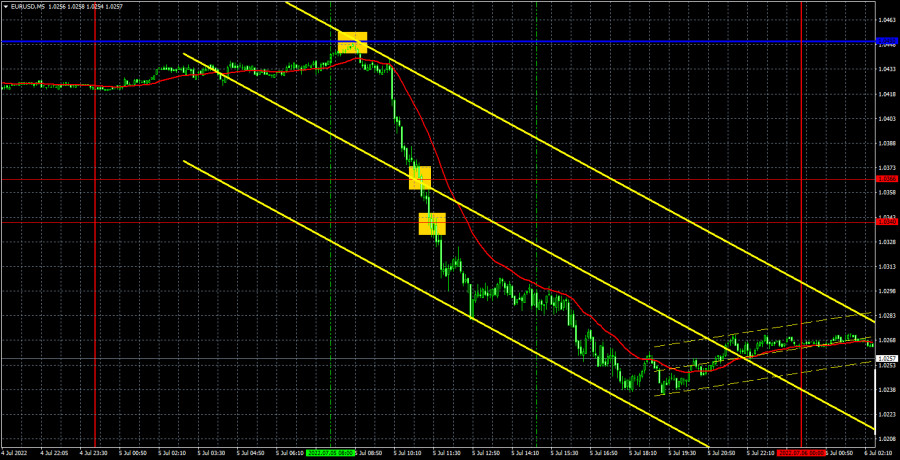 The EUR/USD pair fell by almost 200 points on Tuesday. Days earlier, we frankly did not expect such a scenario, only because important events and reports were not scheduled for Tuesday. Nevertheless, the market has found reasons to start sell-offs on the euro almost out of the blue. We believe that this happened due to the fact that professional players started large shorts. Such as banks. Otherwise, it is very difficult to imagine that ordinary private traders conspired or even began to get rid of the euro without any apparent reasons and grounds! Thus, it was not possible to predict this collapse. The only report of the day was the index of business activity in the services sector of the European Union, which turned out to be weaker than in the previous month, but could hardly have provoked such a strong collapse of the pair. But the euro has finally updated its 20-year lows - we have been waiting for this for a very long time.

From the point of view of forming trading signals, everything was just fine. The very first signal - a rebound from the Kijun-sen line - became the only one on which to open a trading position. After it was formed, the pair went down 190 points and that is how many traders could earn on a short position. This, though somewhat spontaneous, but at the same time an excellent result. The deal had to be closed manually, since there is no other level below 1.0340. 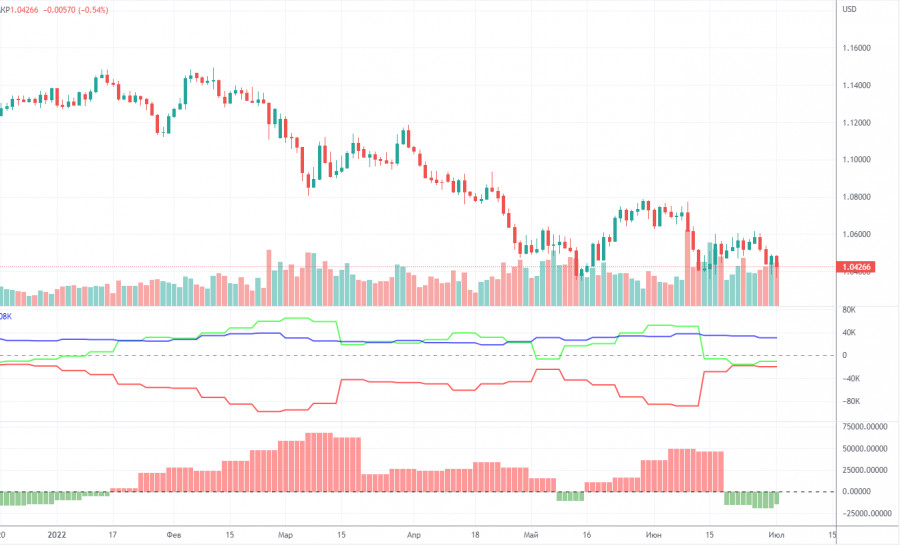 The latest Commitment of Traders (COT) reports on the euro over the past six months have raised a huge number of questions. The chart above clearly shows that they showed a blatant bullish mood of professional players, but at the same time, the euro was falling at the same time. At this time, the situation has changed a bit, and not in favor of the euro. If earlier the mood was bullish, but the euro was falling, now the mood has become bearish and... the euro is falling. Therefore, for the time being, we do not see any grounds for the euro's growth, because the vast majority of factors remain against it. During the reporting week, the number of long positions decreased by 6,100, and the number of shorts in the non-commercial group decreased by 11,100. Accordingly, the net position slightly increased by 5,000 contracts. However, the mood of major players still remains bearish. From our point of view, this fact very eloquently indicates that at this time even professional traders do not believe in the euro. The number of longs is lower than the number of shorts for non-commercial traders by 11,000. Therefore, we can state that not only the demand for the US dollar remains high, but also the demand for the euro is quite low. This may lead to a new, even greater fall of the euro. In principle, over the past few months or even more, the euro has not been able to show even a tangible correction, not to mention something more. The highest upward movement was about 400 points.

Overview of the EUR/USD pair. July 6. It has happened: the euro has updated its 20-year lows.

Overview of the GBP/USD pair. July 6. Finland could become a new hotbed of conflict in Europe.

Forecast and trading signals for GBP/USD on July 6. Detailed analysis of the movement of the pair and trading transactions. 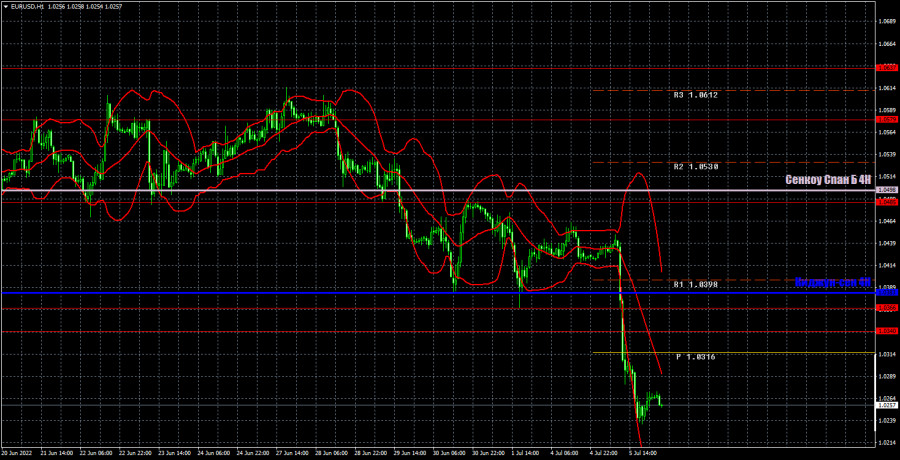 It is clearly seen on the hourly timeframe that the pair continues to be below all the lines of the Ichimoku indicator. Thus, the trend remains downward, and the bears have finally coped with the level of 1.0366. However, they still remembered that there are simply no factors supporting the euro right now. We allocate the following levels for trading on Wednesday - 1.0340-1.0366, 1.0485, 1.0579, as well as Senkou Span B (1.0498) and Kijun-sen (1.0383) lines. Ichimoku indicator lines can move during the day, which should be taken into account when determining trading signals. There are also secondary support and resistance levels, but no signals are formed near them. Signals can be "rebounds" and "breakthrough" extreme levels and lines. Do not forget about placing a Stop Loss order at breakeven if the price has gone in the right direction for 15 points. This will protect you against possible losses if the signal turns out to be false. The European Union will publish an index of business activity in the construction sector, as well as retail sales. Far from the most important reports, even in normal, quiet times. Meanwhile, we only have the index of business activity in the ISM service sector in the US. This report will be more important and, in case of a strong deviation from the forecast, may provoke a significant market reaction.