Forex Analysis & Reviews: EUR/USD. Analysis for December 1. The dollar has declined and is threatening to break the wave pattern again. 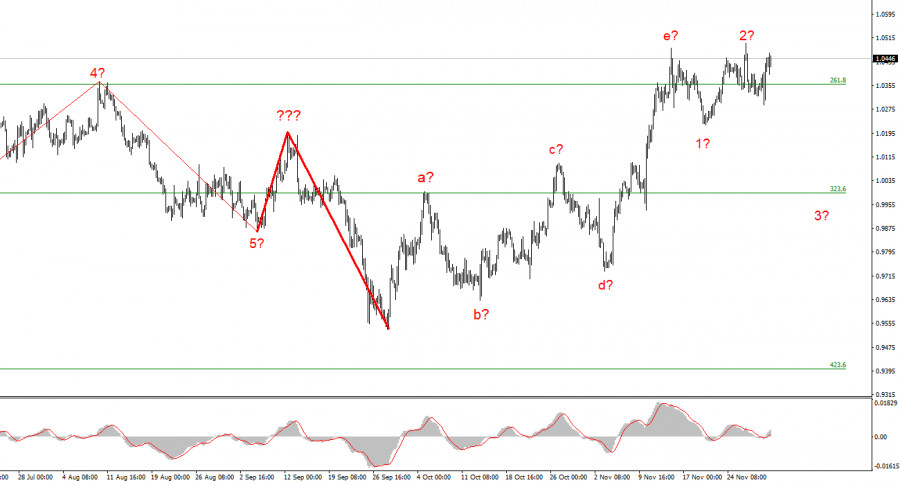 Although it still looks very convincing, the wave marking on the 4-hour chart for the euro/dollar instrument needs to be adjusted. The upward portion of the trend has corrected itself. We have obtained a complex correction structure of a-b-c-d-e waves. The peak of wave e exceeds the peak of wave C, so if the wave markings are accurate, construction on this structure may be nearly finished or already finished. In this instance, it is anticipated that we will construct at least three waves downward, but if the most recent phase of the trend is corrective, the subsequent phase will probably be impulsive. Therefore, I am preparing for a new, significant decline in the instrument. The market will be ready to sell when a new attempt to breach the 1.0359 level, which corresponds to 261.8% Fibonacci, is successful. However, the retraction of quotes from the reached lows this week suggests that the entire wave e may end up longer and that the instrument's most recent decline is not the first wave of a new descending section. However, the alleged wave 2 or b might still exist because it only punctured the wave e's peak. Because there isn't an increase in demand for US currency, the wave pattern is generally starting to become muddled.

Powell received no attention from the market at all.

The euro/dollar instrument increased by 60 and 70 basis points on Thursday and yesterday, respectively. Thus, a more complex and extended form of wave e is becoming more and more likely. Unfortunately, given the current course of events, it is possible to repeat this process multiple times for the entire upward section of the trend. Over the past two years, the downward section has repeatedly taken on a longer form than was anticipated, and upward corrective waves have become extremely rare. Things are going in the opposite direction right now. Demand for the dollar may decline even on days when it is not in danger.

There was no trouble yesterday. Inflation in Europe dropped to 10%, while third-quarter GDP growth in the United States was 2.9%. Excellent conditions for the US currency to increase in value. Instead, we noticed a new rise in quotes because the market perceived Fed President Jerome Powell's speech as slightly more "dovish" than before. This occurred in the evening. Since the main theses have stayed the same for several weeks or months, I don't think so either. Other FOMC members also express them in addition to Powell. However, the market was once more selling and wanted to. It's getting more difficult to continue to believe that the anticipated downward wave or set of waves will be built. Only the manufacturing sector business activity index has been made public in the European Union, and an equivalent index has yet to be made public in America. The growth of the instrument can continue if tomorrow's payrolls are within market expectations by a significant margin. 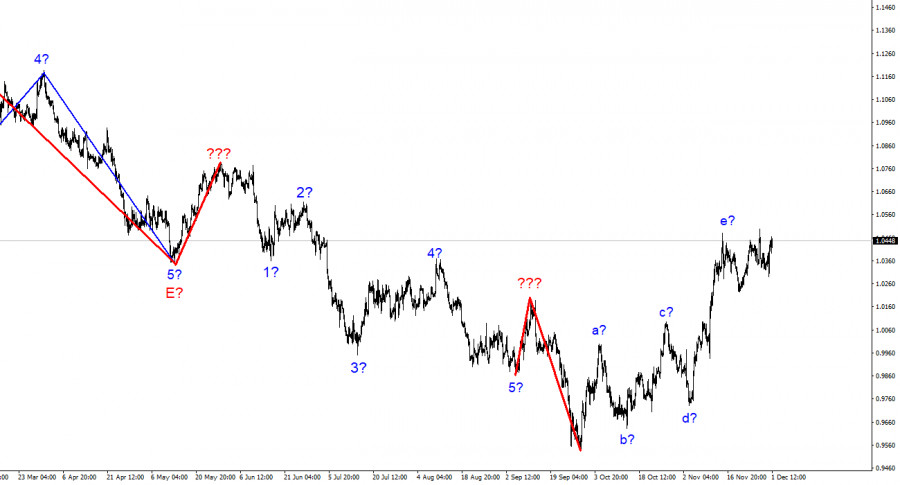 The upward trend section's construction is complete and has increased complexity to five waves (or is nearing completion). As a result, I suggest making sales with targets close to the estimated 0.9994 level, or 323.6% Fibonacci. The likelihood of this scenario occurring is increasing daily. The upward portion of the trend may become more extended and complicated.