Anyone would agree with InstaForex: the annual rally raid Dakar is one of the most spectacular sports events in the world. The completely new route in the latest edition put all Dakar fans on edge. It was the second time Saudi Arabia hosted the legendary rally marathon.

The route of the 43d edition stretching 7,646 km long began and finished in Jeddah. So, the contestants had to cross the desert and drive along the Red Sea coast. All 12 stages posed a tough challenge as the participants had to push ahead across steep sand dunes under the scorching sun. 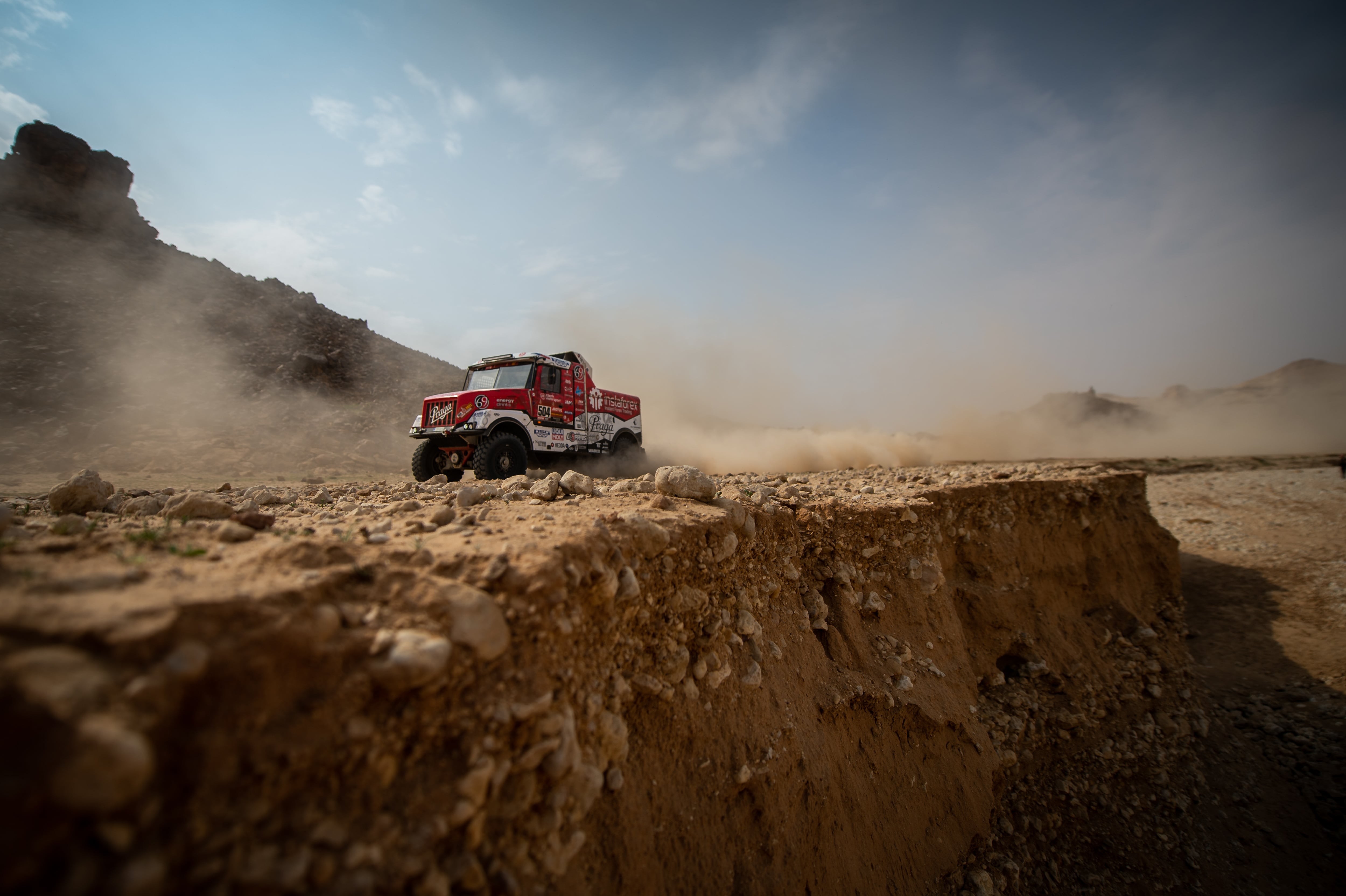 In the truck category, 42 reputable rally teams were engaged in the fierce struggle, ready to prove their resilience. However, only 20 of them coped well and reached the finish line.

The InstaForex Loprais Praga team always sets a goal of asserting leadership in the truck category. This season was no exception. 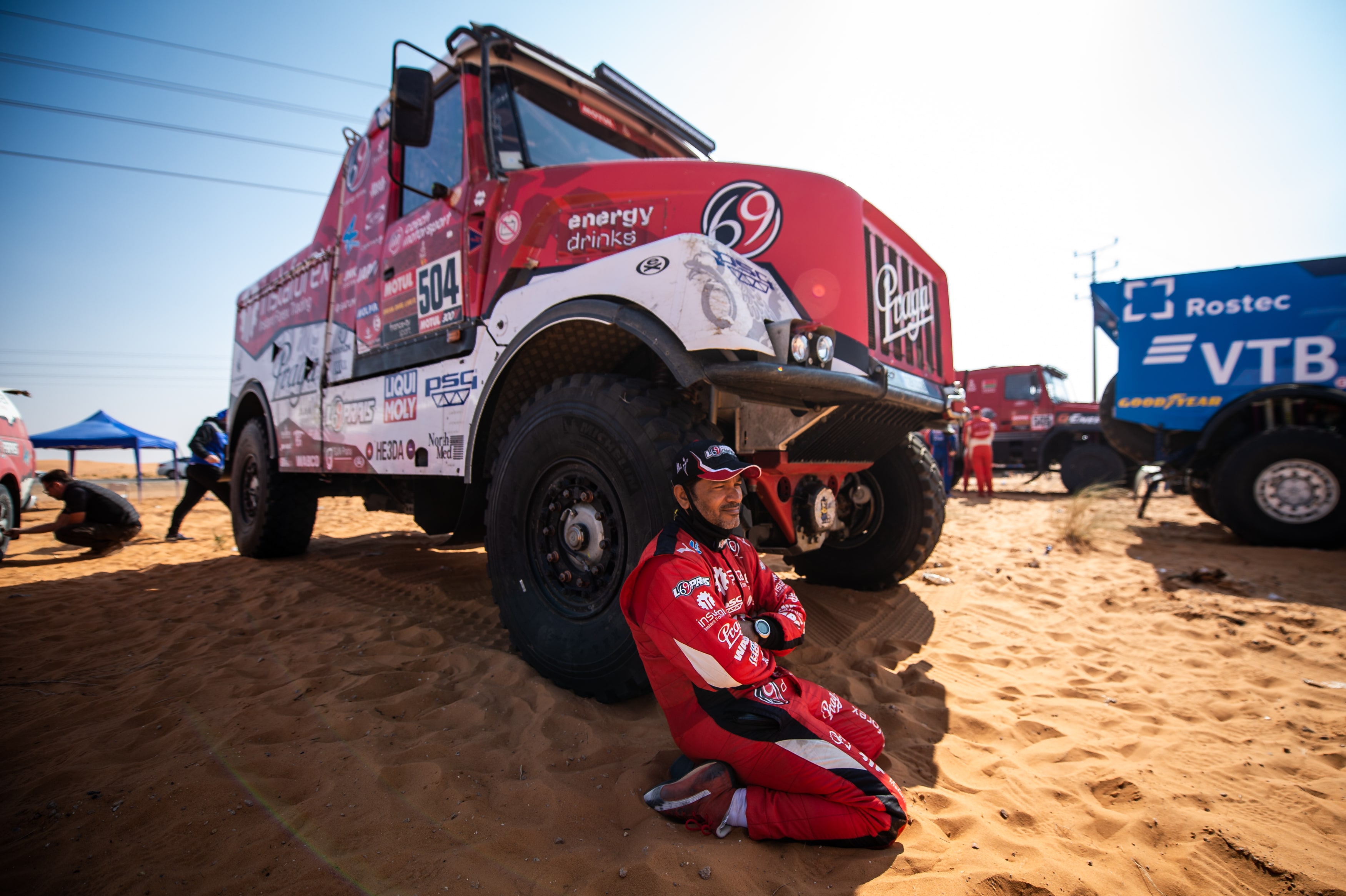 The official InstaForex Loprais name dates back to May 2011 when the company became the title sponsor of the rally team headed by Ales Loprais. The team instantly benefitted from this partnership, having won the champion title in the prestigious Silk Way Rally. A regular winner of intermediate stages, Ales Loprais has been among the top 7 drivers in the overall standing for the last 7 years.

Ales Loprais chose a sporting career not by chance. He followed in his uncle’s footsteps. In 2006, Ales first took part in a rally as a co-driver of his famous uncle Karel Loprais, a 6-time winner of the Dakar Rally in the truck category. Interestingly, Ales made his debut in the most challenging off-road endurance event in the world. 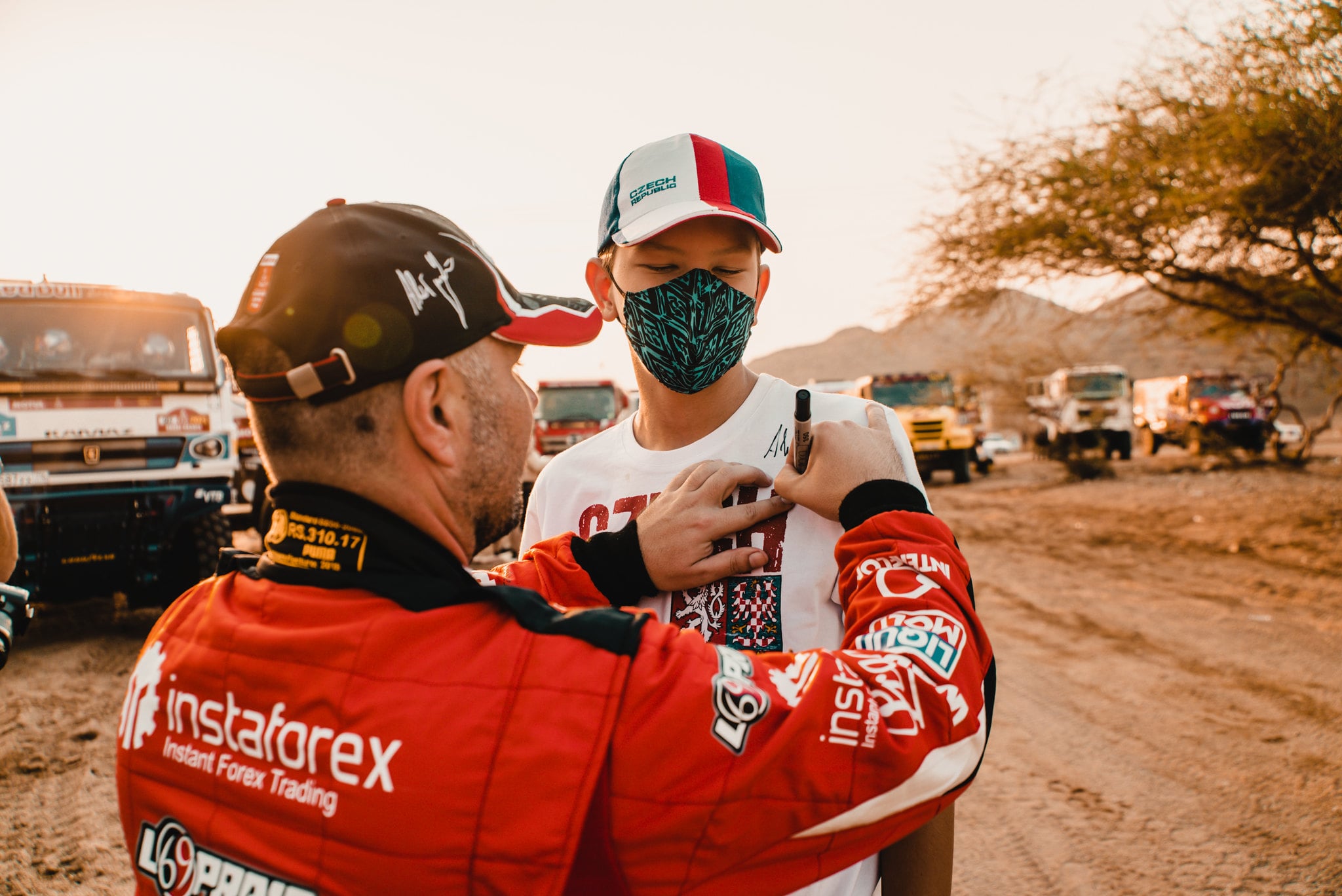 Karel Loprais is still acknowledged to be the superior rally raid driver of Dakar. He has achieved the second best score in the history of the event. Stéphane Peterhansel has been the undisputed hero of Dakar. 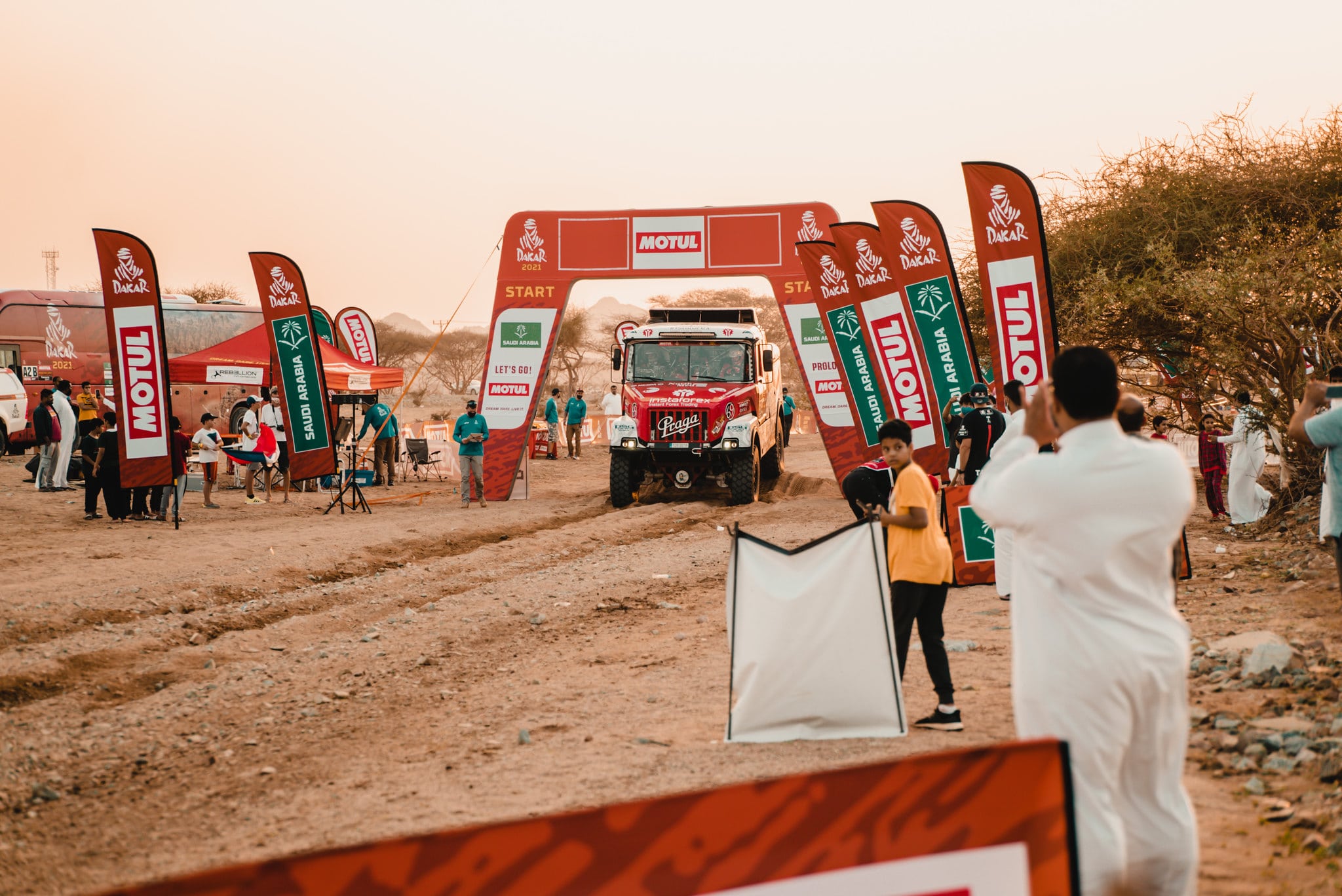 Route for trucks in 2021 Dakar Rally

The rally raid began with the prologue stage running 11 km. The results determined ranks for the trucks to start in the first stage. A rapid but cautious race brought InstaForex Loprais team the 6th rank. 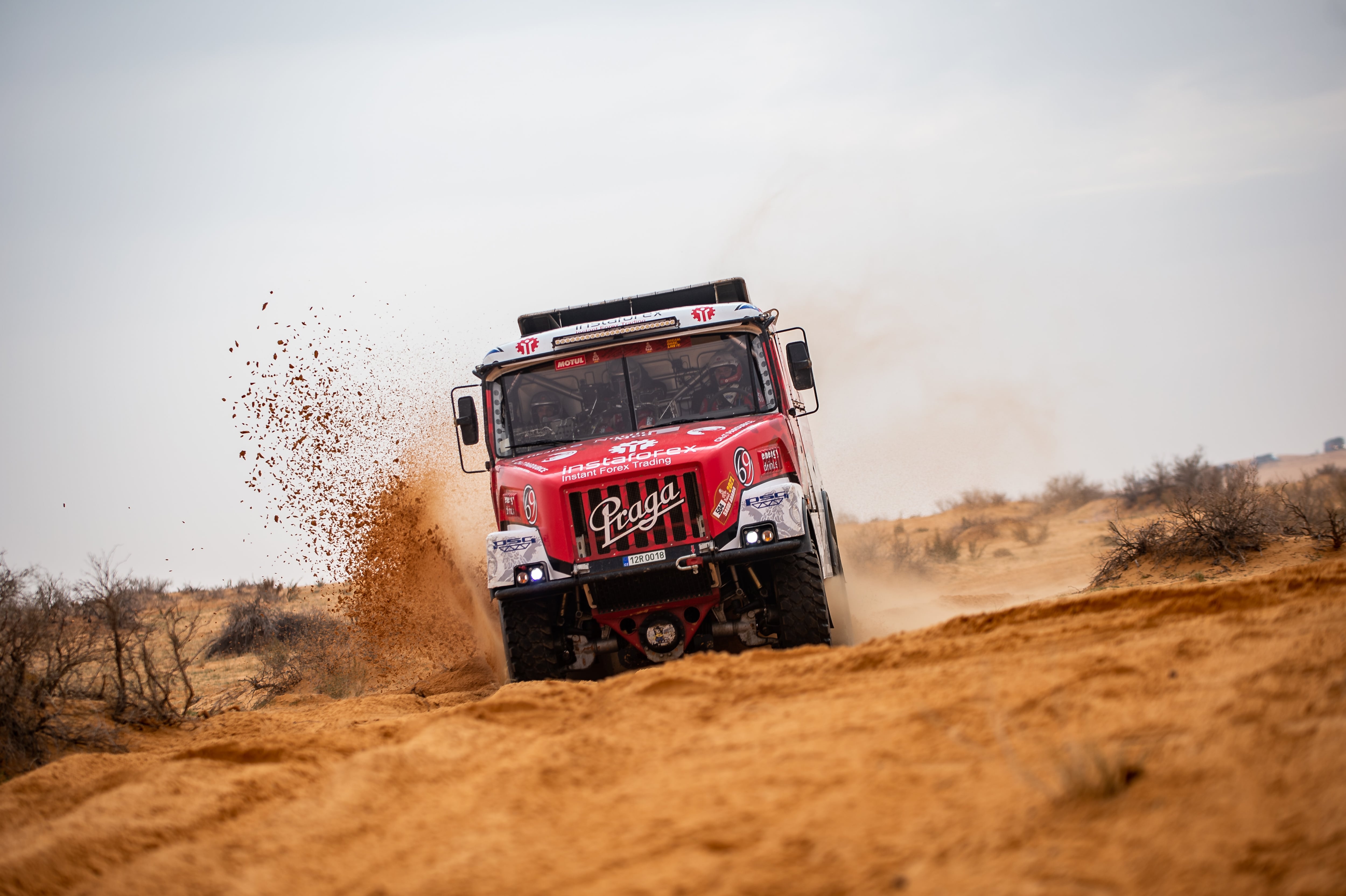 Starting the first stage with confidence, the team focused on its goal. The remarkable success came as a surprise to the crew. Praga V4S DKR truck driven by Ales Loprais and his crew mates Khalid Alkendi and Petr Pokora was the second to cross the finish line in the truck category. 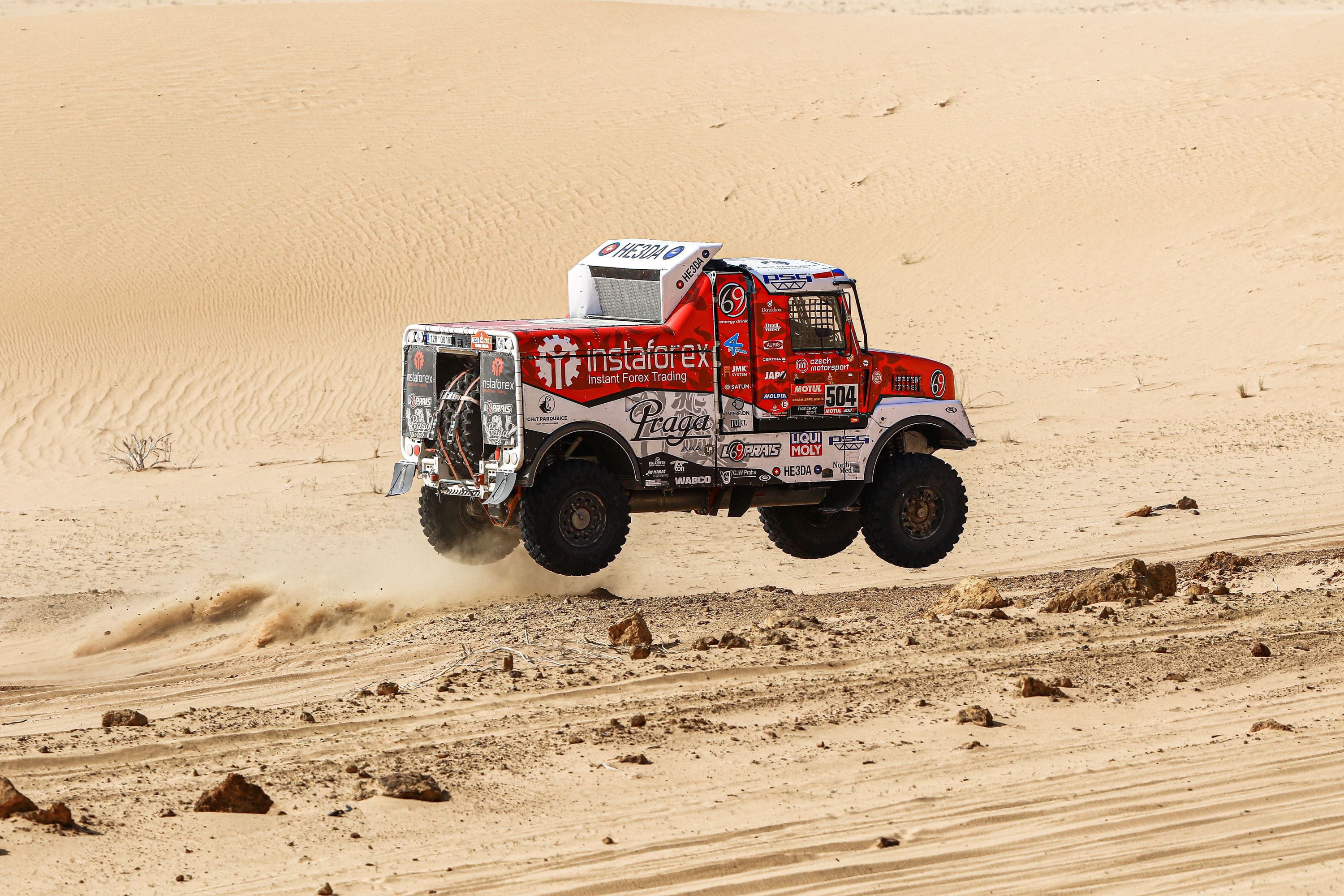 At Stage 2, all contestants had to deal with sand dunes. A tire puncture threw the InstaForex Loprais drivers off track. They spent 11 precious minutes in the middle of the desert replacing a tire. Hence, they were able to finish the stage with the 9th result.

Stage 3: big dunes, rocky canyons, and fast desert winds greeted competitors at Stage 3 of the Dakar Rally. The InstaForex Loprais crew was able to shorten the distance and finish fifth in the standings. 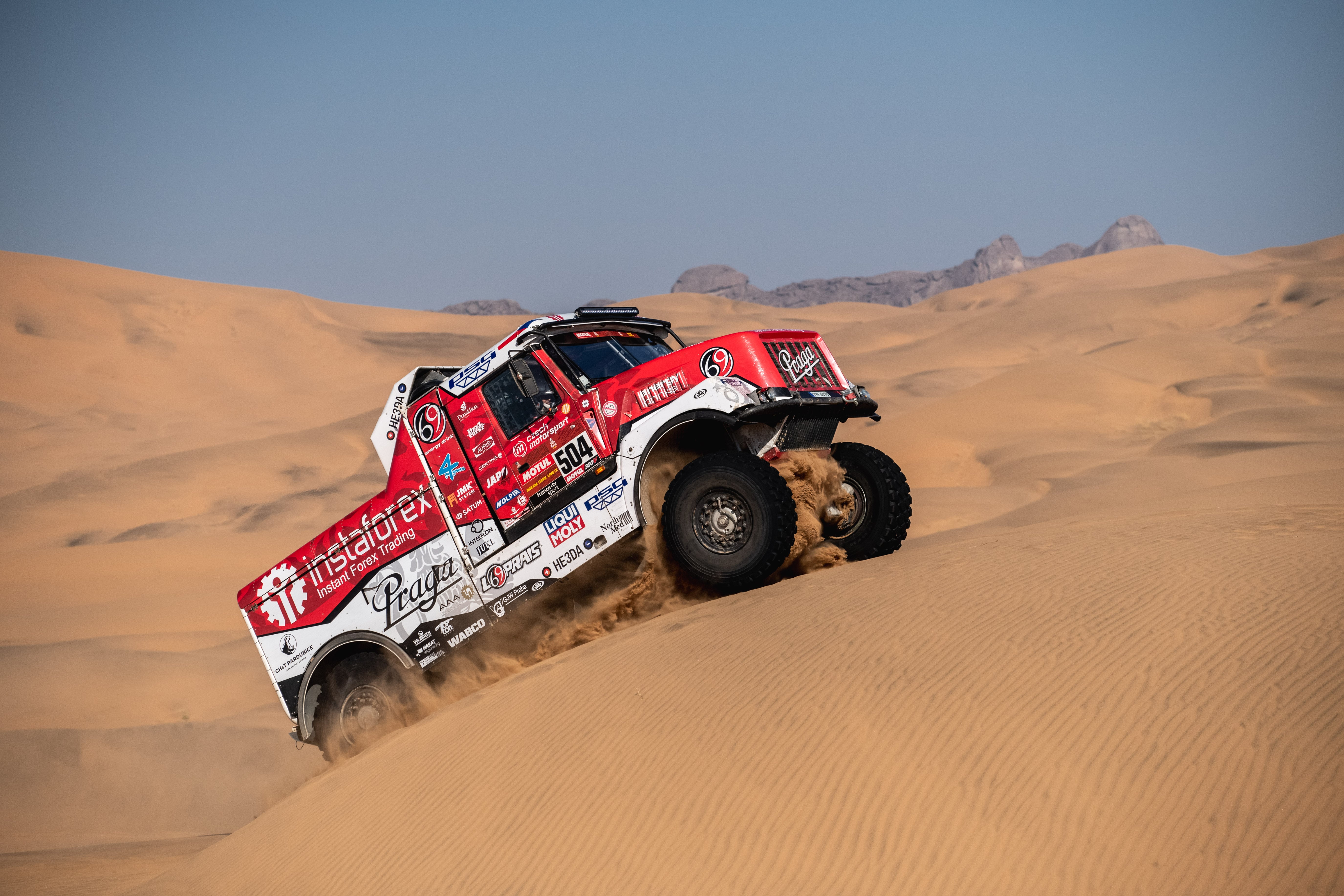 Stage 4: Stage 4 was the longest stage of the 2021 Dakar Rally that covered a distance of 813 kilometres. On their way, competitors tackled mixed terrain ranging from sand dunes to gravel tracks of Saudi Arabia.

We had a good run from the start. But then we caught up with one of the MAZ trucks, ran into dust, and we got a puncture, – Ales Loprais said. 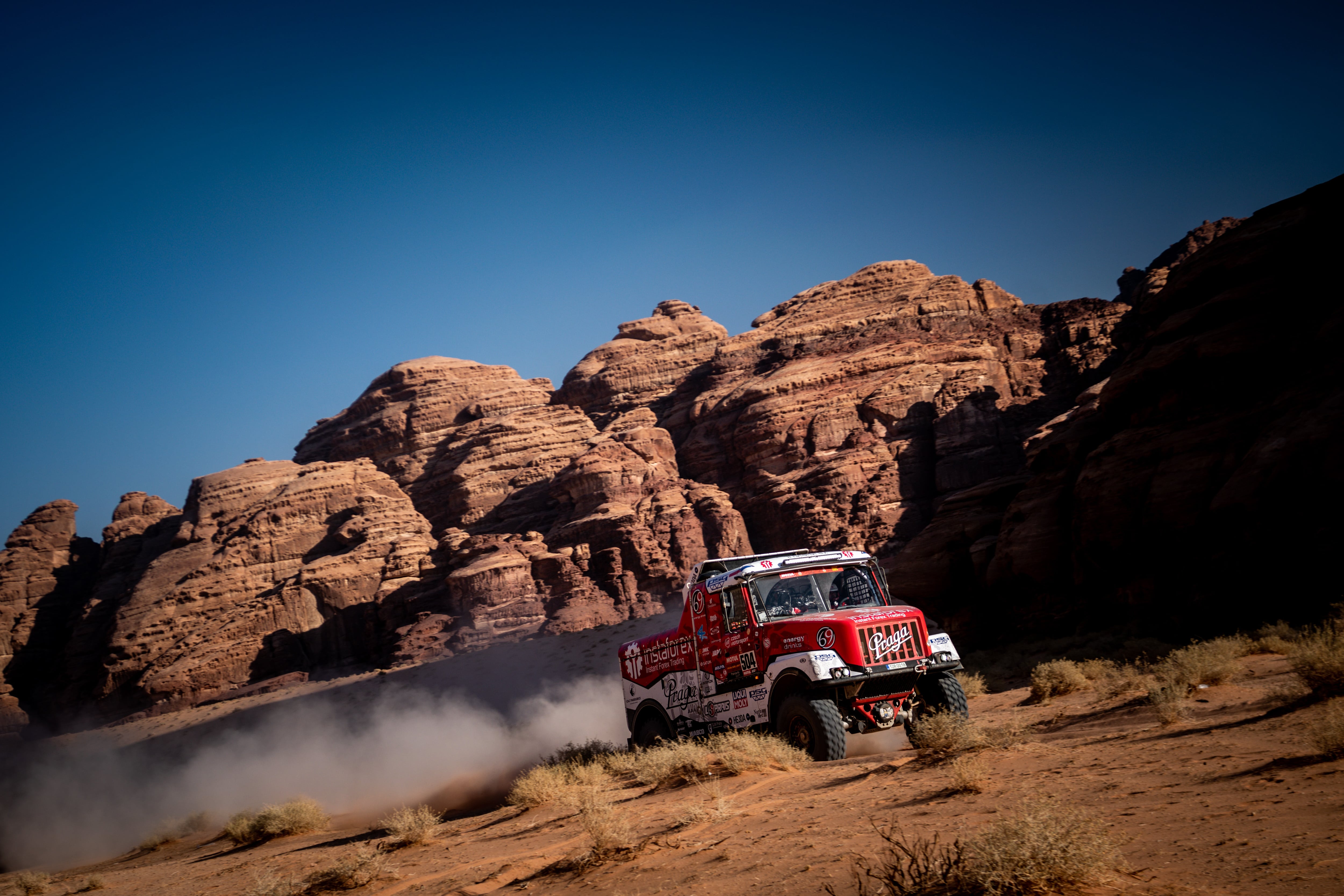 Stage 5 turned out to be the toughest one of the Dakar Rally with headache-inducing navigation and terrain to drain racers and trucks.

This time, racing crews of other categories, including the main favorites, got stuck right at the start due to navigation errors. Loprais`s team was no exception. At this stage, the gap between the InstaForex Loprais team and the leader of the race was 21 minutes. At some point, our team ended up fifteenth in the standings.

We felt a certain frustration, but it just motivated us to push even harder. If you take away those 21 minutes that we lost due to a navigation error, it was a great time, – mechanic Petr Pokora said.

After InstaForex Loprais Praga Team returned to the track, it literally flew through rocks and sand. The red and white Praga was so fast that it impressed even experienced racers. In the final 130 kilometres, Loprais reduced the gap to the leader by six minutes and finished the stage in fifth place. 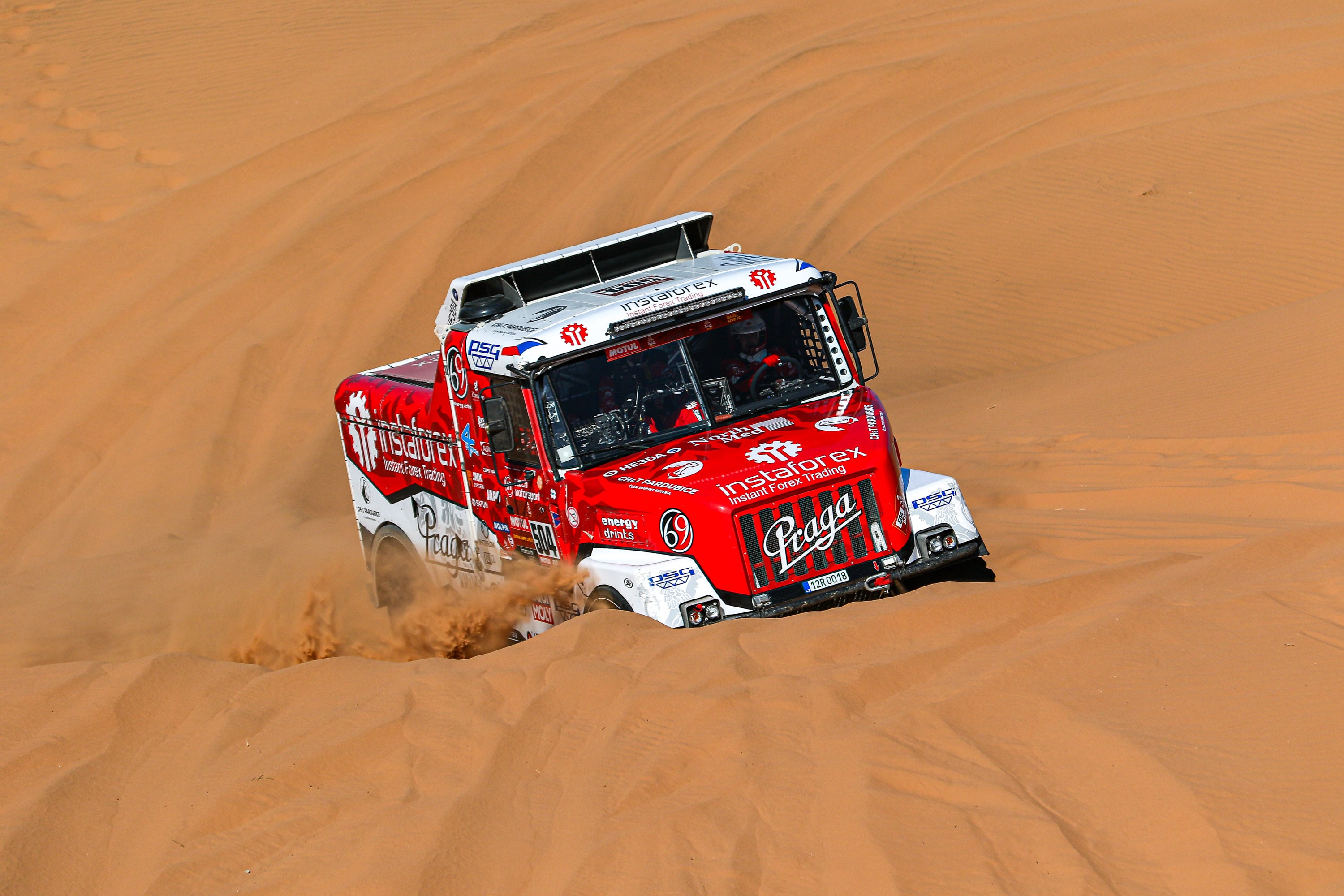 Stage 5 was so tough that organizers decided to shorten Stage 6 by 100 kilometres. Our team fought for victory along with 4 KAMAZ trucks and Belarusian Aliaksei Vishneuski in a MAZ truck. All 6 racers finished one minute behind each other. At the end of the stage, Ales Loprais was five minutes behind the leader. 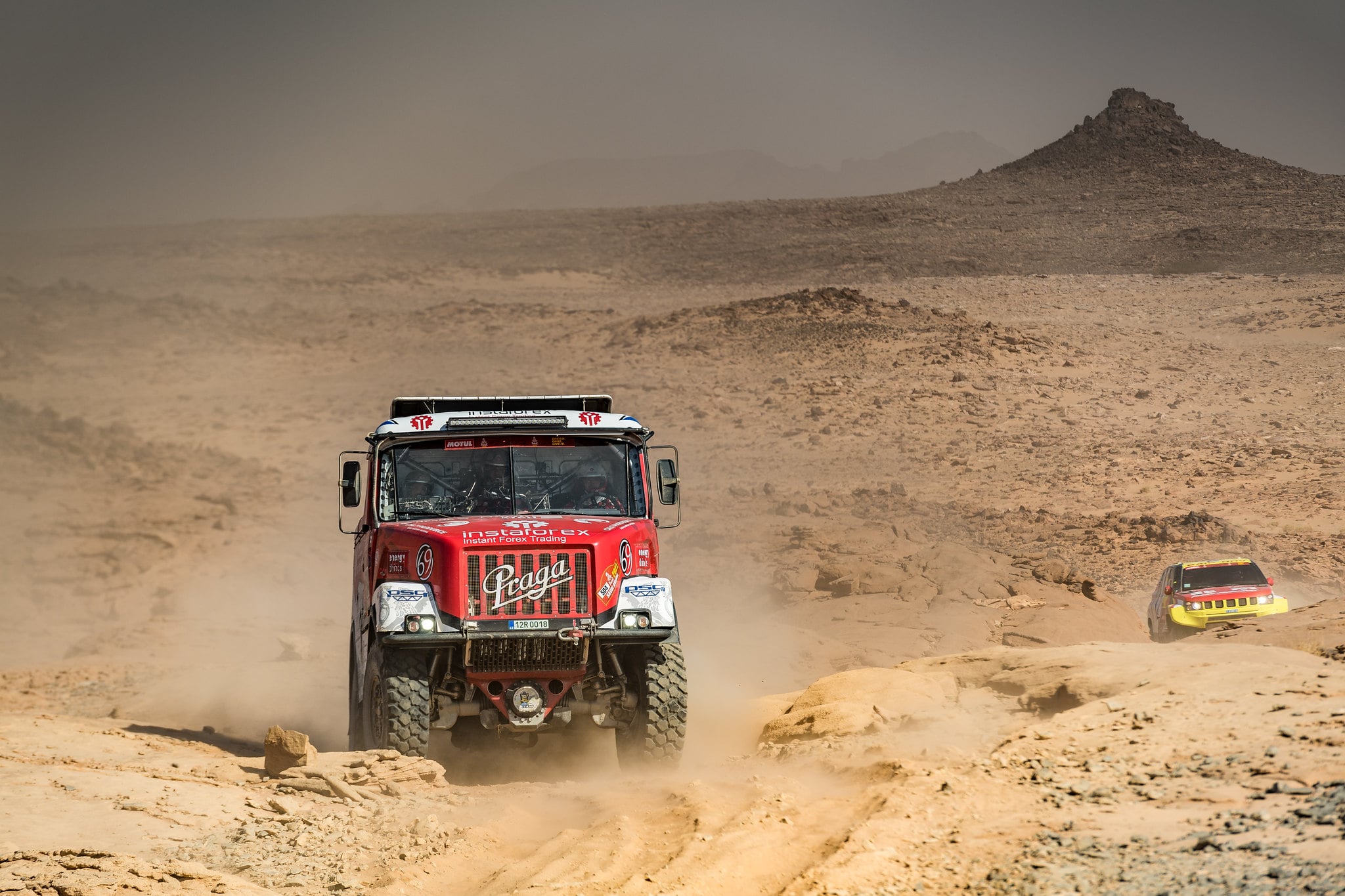 The marathon stage of the Dakar Rally started right after the day of rest at the bivouac that took place on January 9. Ales Loprais, Khalid Alkendi, and Petr Pokora got an adrenaline rush even before the start. 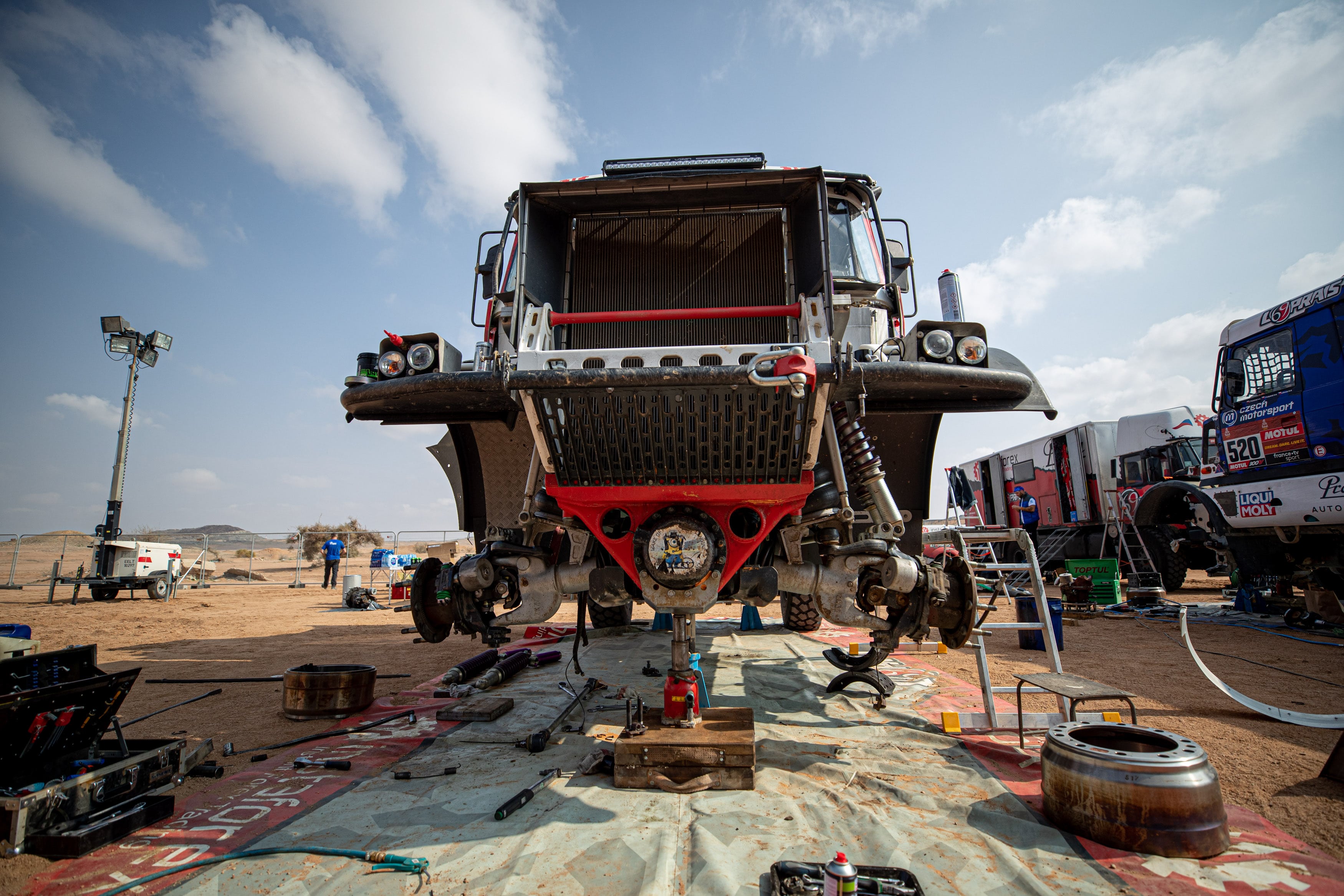 A right front-wheel bearing burnt down. The fire also destroyed a brake and an inflation system. So, we couldn’t adjust tyre pressures on the front axle for the rest of the stage. We had to tackle dunes despite having, for example, 4 atmospheres instead of 2 or even 1.5. So, when a MAZ that was in front of us got stuck, Petr had to get out to deflate the tyres manually. That was suffering, Ales Loprais stressed. 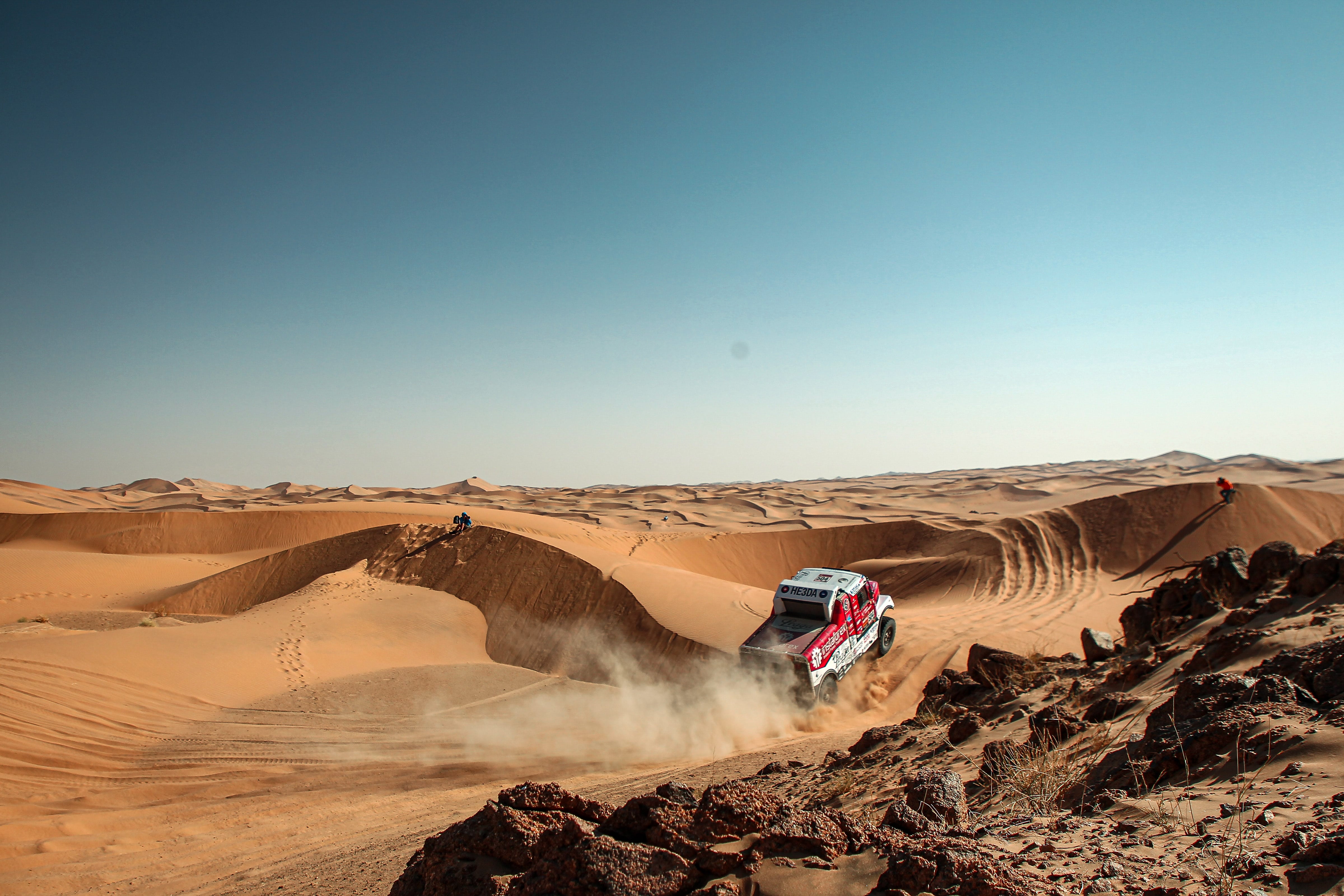 Despite all these challenges, the Praga V4S DKR truck, also known as The Lady, finished the stage in sixth place, behind four factory Kamaz trucks and Aliaksei Vishneuski with a factory MAZ.

The second track of the Dakar Rally’s dangerous marathon stage turned out to be a day of heroic performances. Under the marathon conditions, only members of the race team were allowed to support vehicles. In our case, that created another challenge as almost the entire front axle of Praga V4S DKR had to be replaced. 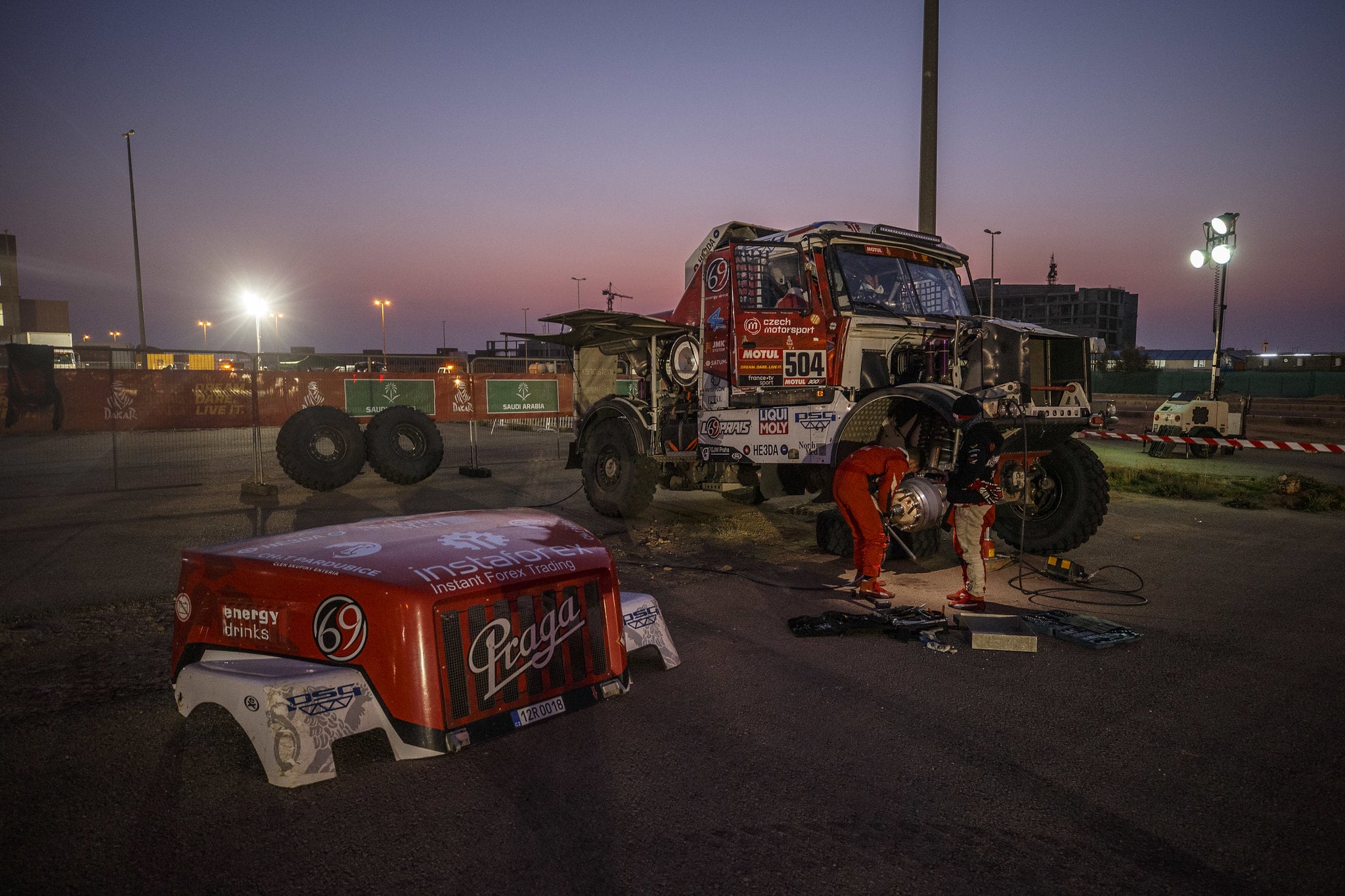 It’s all fixed and tyres changed. I, Jiří and Jan have slept for about an hour, but it’s done! We don’t enjoy this type of work even back home, where we have a crane. But we did it, Petr Pokora said in the morning.

At this stage, Loprais fearlessly competed with Ayrat Mardeev and was ahead of the KAMAZ driver by only 45 seconds. The InstaForex Loprais team also increased its lead over the overtaking crew. The gap between the fifth-placed Martin Masik and Loprais was 22 minutes.

Stage 9 of the race began on the shore of the Red Sea. Fortunately, the InstaForex Loprais team passed the stage without critical errors. The team crossed the finish line in a positive mood maintaining its position in the ranking. 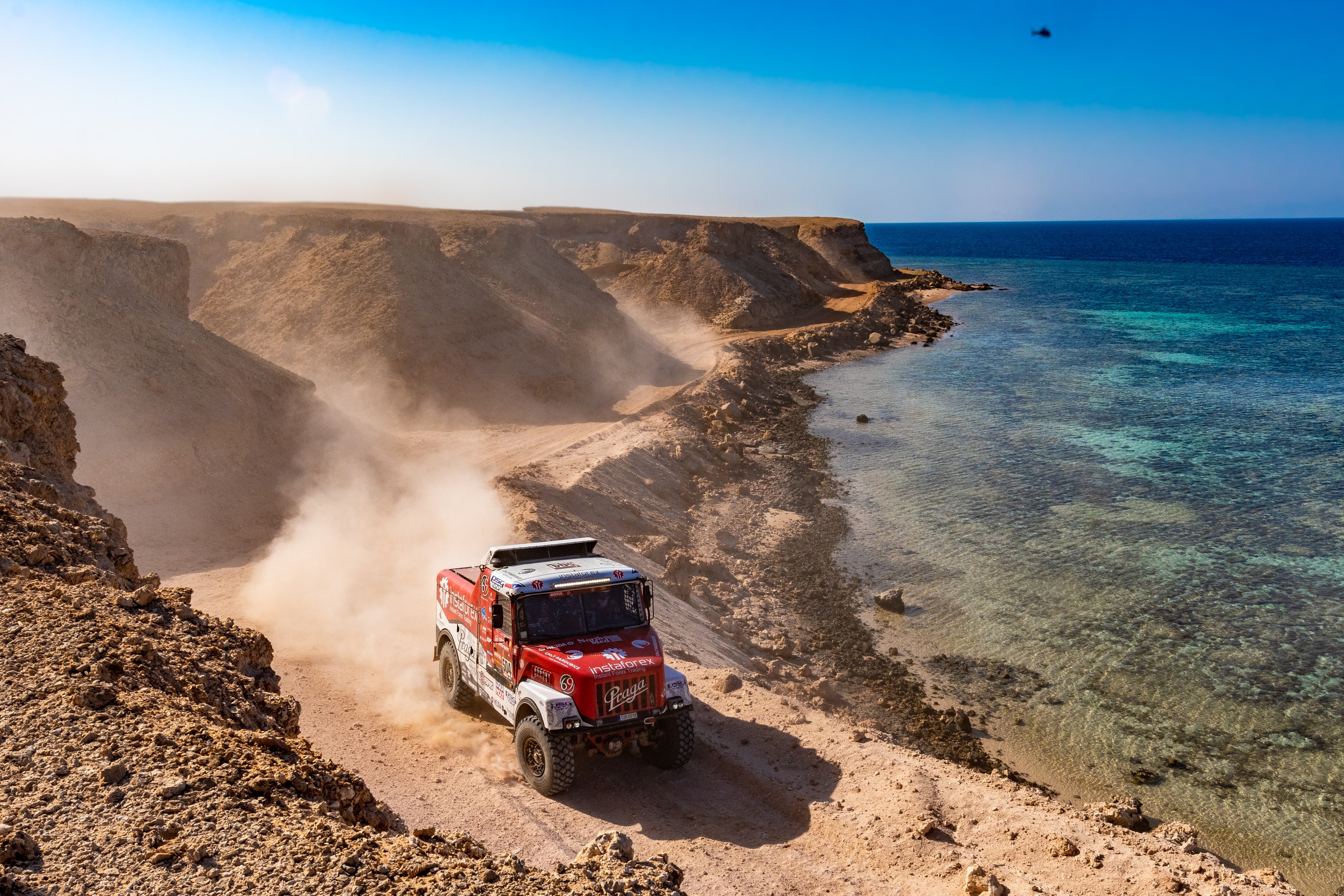 During stage 10, Ales Loprais and his crew fought with 4 KAMAZ trucks and finished exactly 4 minutes behind the winner. All the technical problems of the past days were resolved. The Lady ran through the stage flawlessly.

However, the InstaForex Loprais team experienced a deja vu at the 11th stage. A year ago, Ales Loprais and his team started the penultimate stage of the Dakar Rally from fourth place, having all chances to get a position on the pedestal. However, they were unable to nail down their success due to technical glitches.

This year, the Praga V4S DKR took fourth place again. Like a year ago, the InstaForex Loprais Praga team was preparing for an aggressive driving and real dash in the dunes but the same sad story repeated. 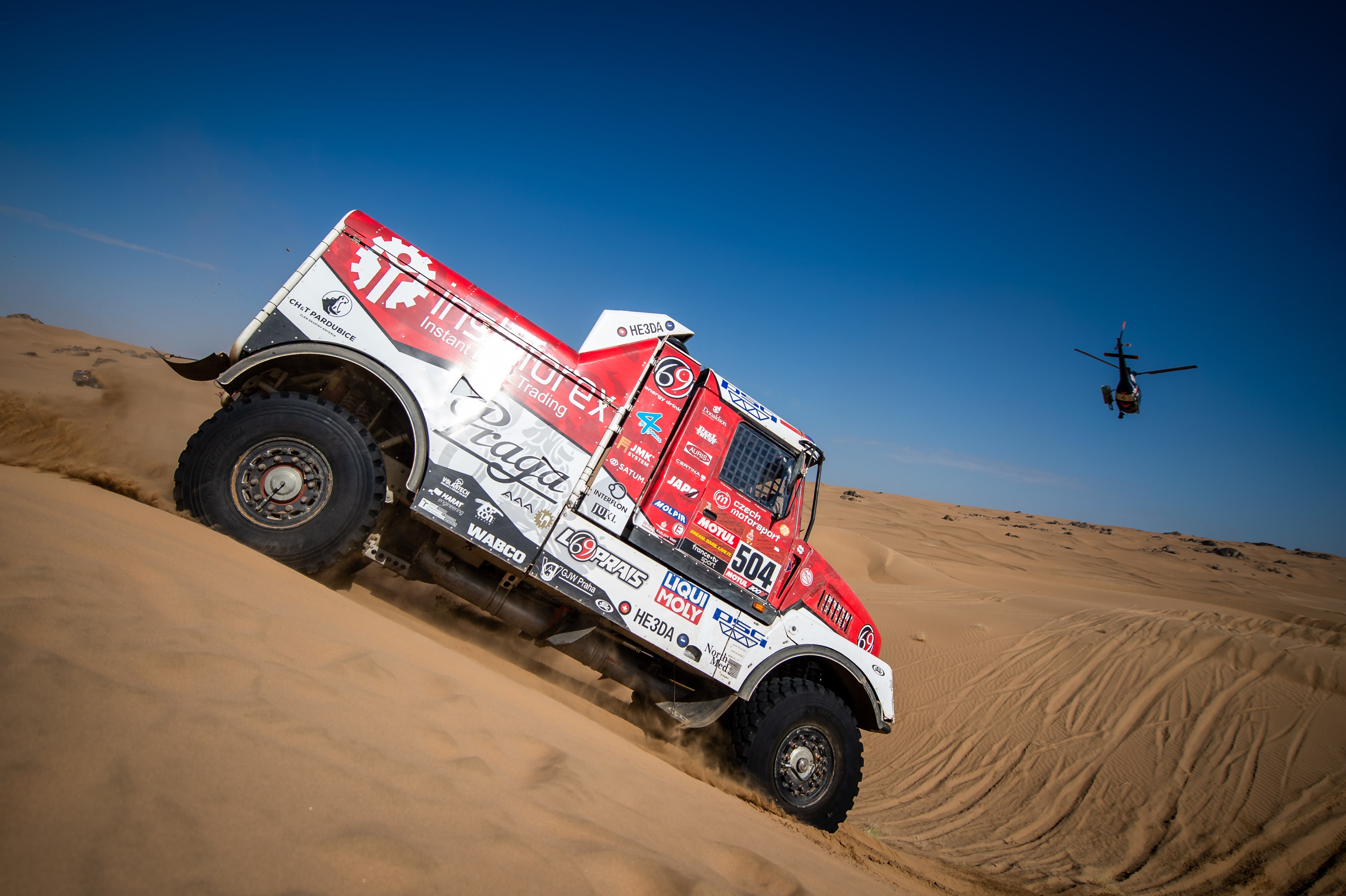 When dealing with technical problems, Ales Loprais, Khalid Alkendi, and Petr Pokora lost more than 26 minutes to the winner of the stage, Anton Shibalov. As a result, they were down by one position in the overall standings.

At the final stage of the marathon, the racers prepared for the last push in order to reach the finish line of the Dakar Rally 2021 as quickly as possible without losing much time. Notably, the final stage turned out to be rich in dramatic events. Despite the successful starting positions, some crews did not reach the finish at all. Yet, Ales Loprais and his team managed to avoid critical mistakes and keep their cool even in a difficult and exhausting final fight.

Today, I got the maximum out of The Lady and myself. I wanted to make up for the loss we had yesterday, due to the technical issues. The route offered some dunes, that I enjoy so much and that’s where I managed to get ahead of three trucks that had started ahead of me. I also flew across stones because we had nothing to lose, only to gain, – Ales Loprais said.

On a ninety-ninth kilometre waypoint, Ales was leading by 2:42 minutes ahead of Dmitry Sotnikov on KAMAZ. He was ahead of Martin Macik by 3:22 minutes, who was in fourth place in the overall standing. However, the front-right tire did not survive the push. It fell apart from the inside. After fixing the tire, Loprais with Alkendi and Pokora finished the stage eight minutes behind the winner. 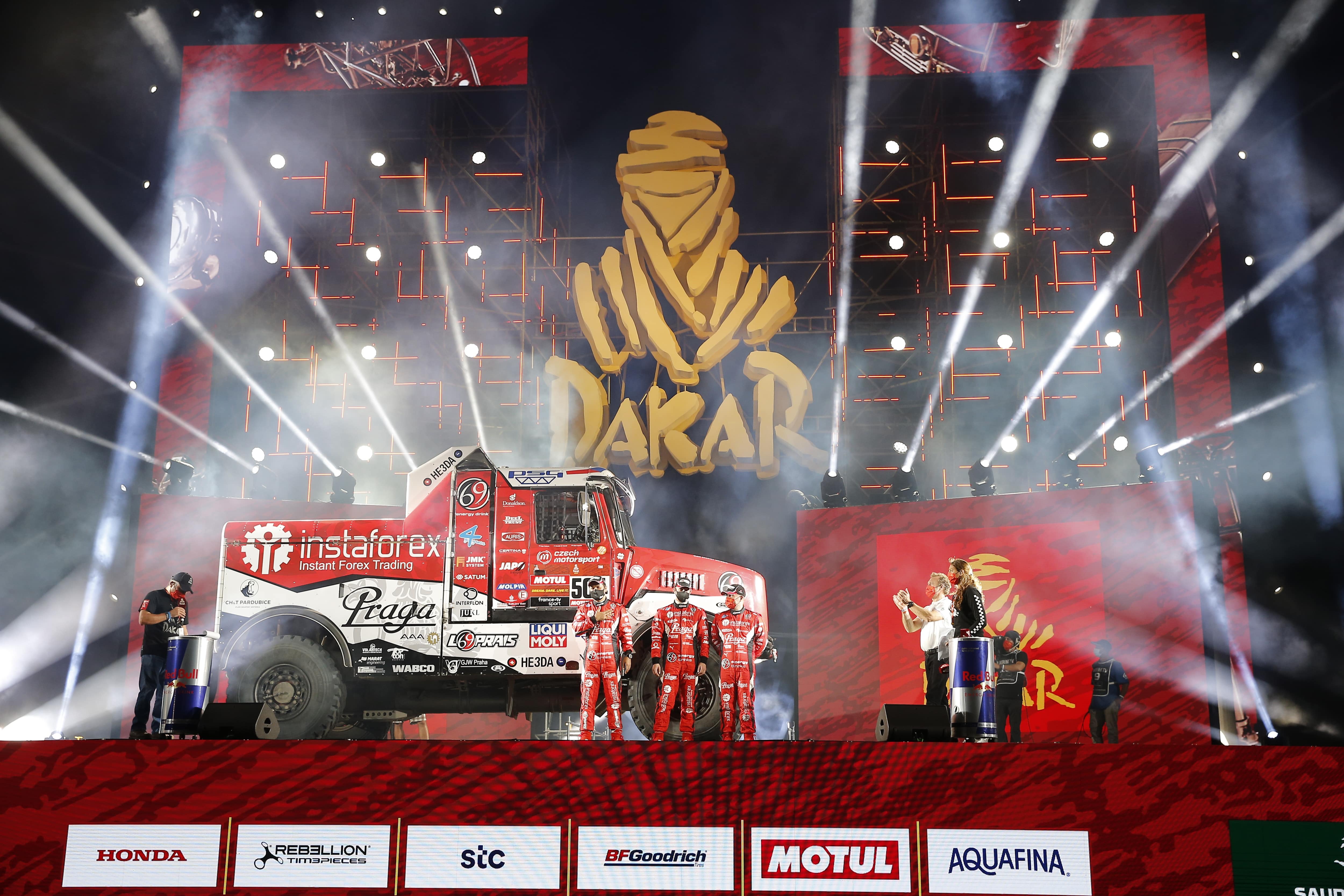 According to the results of the marathon, 3 KAMAZ-master crews took all winning places on the podium. InstaForex Loprais team, Ales Loprais, co-driver Petr Pokora, and navigator Khalid Alkendi on the Praga V45 DKR finished 50 minutes after the start, taking 5th place in the Dakar Rally 2021. 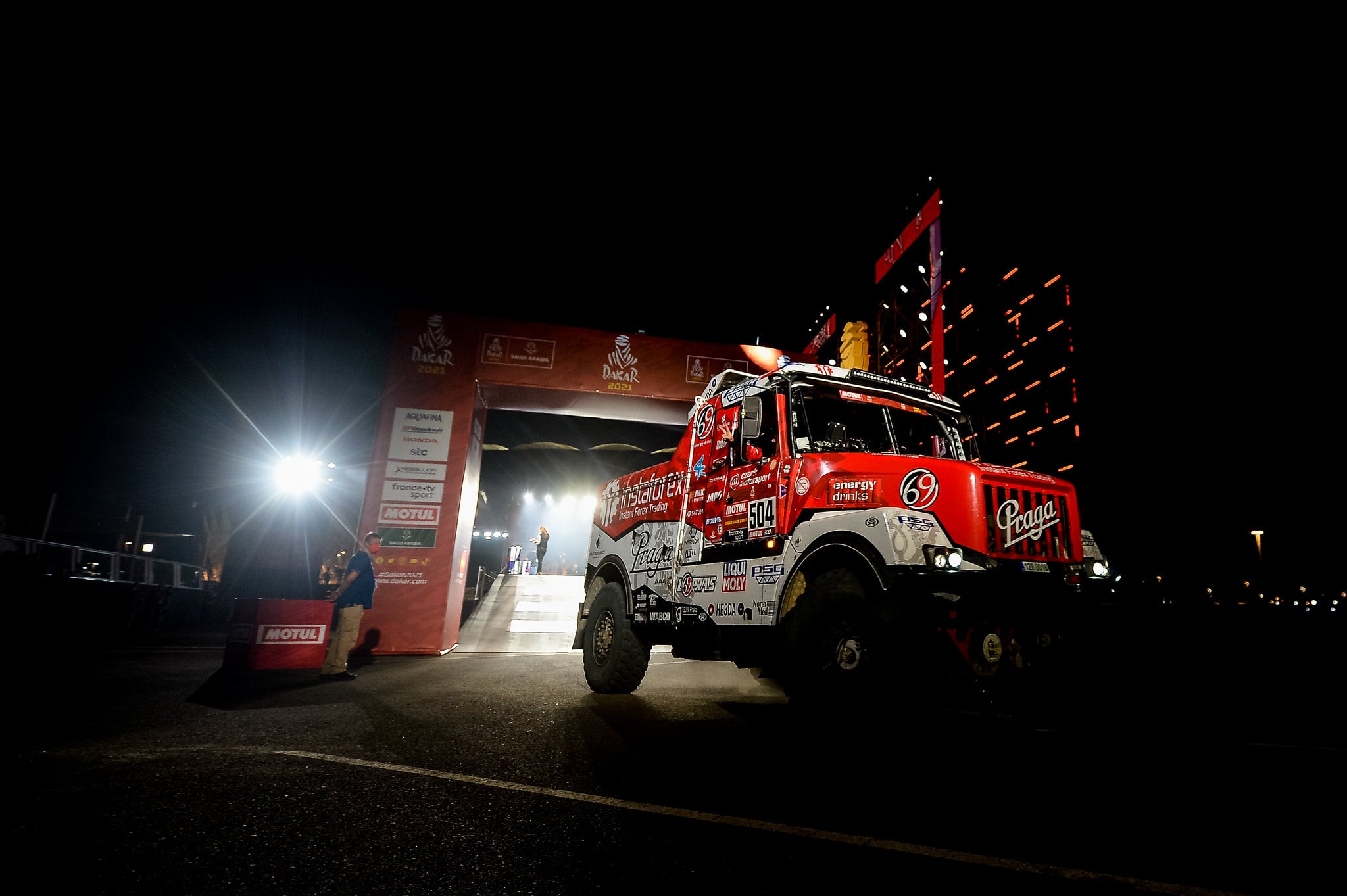 Our team fought bravely and hard in the battle of steel and engines, powerful trucks and people. It also showed persistence, iron will, high-class driving, and team spirit. Thanks to these qualities, our team joined the list of the top five strongest racing teams in the truck category on the planet.

The InstaForex Loprais team was just two hours away from the championship title. Yet, the crew does not plan to give up. Undoubtedly, there are even more victories ahead!

If you are full of competitive spirit and determined to win at any cost, welcome to InstaForex! We are sure to overcome obstacles together without letting doubts stand in the way to success. We are stronger together! We believe in our victory!