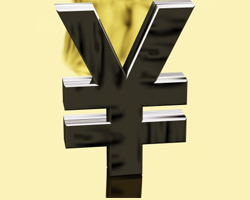 The Japanese yen gained ground against its key counterparts in the Asian session on Friday, after the Bank of Japan left its key interest rate unchanged and launched a new lending program to support small businesses struggling from the impacts of the coronavirus pandemic.

At the emergency meeting, the policy board of the BoJ unanimously decided to launch a lending scheme worth about JPY 30 trillion to support SMEs struggling to operate amid the spread of the novel coronavirus, or Covid-19.

According to the new scheme, the bank will provide funds to eligible counterparties against pooled collateral for up to 1 year at the loan rate of zero percent.

The board voted 8-1 to retain the interest rate at -0.1 percent on current accounts that financial institutions maintain at the central bank.

Also, the bank will continue purchase a necessary amount of Japanese government bonds without setting an upper limit so that 10-year JGB yields will remain at around zero percent.

As for CP and corporate bonds, the BoJ will maintain their amounts outstanding at about JPY 2 trillion and about JPY 3 trillion, respectively.

The move sparked fears about escalation of tensions between the U.S. and China, pushing investors into the safe-haven assets.

China also announced it will not set a GDP target for 2020, due to the uncertainty amid the COVID-19 pandemic.

Data from the Ministry of Internal Affairs and Communications showed that Japan consumer prices rose just 0.1 percent on year in April - matching forecasts and slowing from the 0.4 percent increase in March.

Core consumer prices, which exclude volatile food costs, fell an annual 0.2 percent on year versus expectations for a flat reading following the 0.4 percent gain in the previous month.

The currency showed mixed performance against its major counterparts on Thursday. While it declined against the euro and the franc, it held steady against the greenback and the pound.

The yen appreciated to a 2-day high of 107.41 against the greenback, registering a 0.2 percent rise from Thursday's closing value of 107.60. If the yen rallies again, 104.00 is likely found as its next resistance level.

The yen added 0.6 percent against the loonie to touch a 4-day high of 76.64. The pair had closed Thursday's deals at 77.10. The yen may challenge resistance around the 74 mark.

The yen firmed to a 3-day high of 70.09 against the aussie, from yesterday's closing quote of 70.63. Immediate resistance for the yen is likely seen around the 67.00 level.

The value of retail sales fell 0.4 percent as 10 of the 16 regions showed lower sales values.

In today's events, the European Central Bank publishes the account of the monetary policy meeting of the Governing Council held on April 29 and 30 at 7.30 am ET.

Canada retail sales for March are due out at 8:30 am ET.