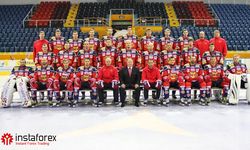 InstaForex is glad to announce extended partnership with HKM Zvolen, one of Europe's leading ice hockey clubs. The new partnership agreement between InstaForex and 2013 Slovak Extraliga champion covers the season of 2014/15.
Thus, InstaForex continues to support the legendary team as a general sponsor in the season of 2014/15 as well.
Since the late 90s, HKM Zvolen (translated as 'knights') has managed to become the champion of Slovak Extraliga gaining four silver medals and one bronze. The team also succeeded in the international arena winning the IIHF Continental Cup in 2005. It beat 2:1 Moscow's Dynamo with such NHL stars as Pavel Datsyuk, Andrei Markov and Maxim Afinogenov.
InstaForex has a long-standing tradition of supporting promising and famous sports teams and individual athletes who have achieved good results and strive for new victories, just like the company. For decades of its existence, Zvolen repeatedly proved its skills, dedication and determination to fight and win.
InstaForex wishes the Slovak club a winning streak in the 2014/2015 season. May you have no injuries and deliver a great many pucks into the rivals' gates!

Legendary German football club Borussia Dortmund and InstaForex have prolonged their partnership
Changes in trading hours with InstaForex on the occasion of Thanksgiving Day
You are probably aware of FX-1 Rally by InstaForex, a weekly contest with a prize fund of $1,500
​Chancy deposit expanded up to $3,000 in anticipation of Dakar 2022!
We would like to inform you on the expiry dates of futures contracts in November 2021
Let us introduce you to the new section on InstaForex website
View more
Can't speak right now?
Ask your question in the chat.