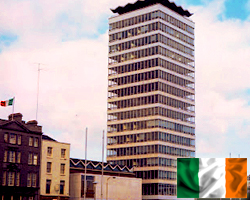 Ireland's construction sector growth eased for the second straight month in April, marking the weakest rise in the current one-year sequence of growth as demand dropped for the first time in over a year, survey data from S&P Global showed on Monday.

The BNP Paribas Real Estate Irealand Construction Purchasing Managers' Index fell to 52.5 in April from 53.9 in March. Any reading above 50 indicates growth in the sector.

Housing activity and commercial projects increased at a softer pace in April, while civil engineering declined for the second month in a row.

New orders fell for the first time in over a year in April.

Input prices rose at the second-fastest rate since the survey began in June 2000.

Sentiment improved from March's seventeen-month low, but was the second-lowest in the past year-and-a-half and below the series average.

"This is no surprise as the pipeline of office and logistics property to be delivered this year is at its highest since 2008," John McCartney, director & head of research at BNP Paribas Real Estate Ireland, said.