The panic will increase, the pound will continue to decline, while the euro is kept in the range

After a short rollback, the world's stock exchanges went back into the red zone. US stock indices fell by 1.2% -1.5% on Monday, the immediate reason was Trump's recognition of the US's unwillingness to conclude a trade agreement with China. The negativity was reinforced by the deteriorating situation in Hong Kong, where street protests are becoming increasingly fierce. Asian exchanges supported the trend and the demand for protective assets is growing again. On Tuesday morning, the gold reached the level of $ 1,535 - the highest since April 2013.

The report of the US Treasury did not bring any reason for optimism - the US budget deficit increased by 27% compared to last year and amounted to $ 867 billion. The most important items of expenditures are social security, defense and Medicare. 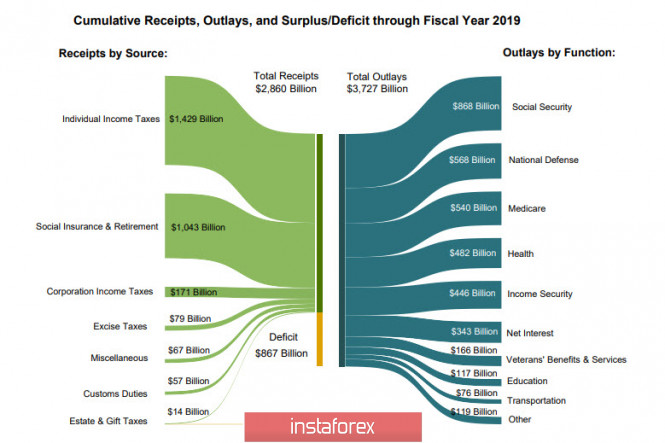 The Congressional Budget Committee (CBO) predicted a 120 billion increase in the deficit in July, which coincided with the final result. Two months before the end of the fiscal year, it is clear that the resulting deficit will exceed 1 trillion.

At the same time, one should not forget that Trump's desperate war for customs tariffs will not help to improve the budget situation in any way - customs duties have doubled and amounted to 57 billion dollars, which is very small amid rising costs.

In light of the recently passed law on extending the term of the public debt ceiling by 2 years, it is clear that the current panic in the markets plays in favor of the United States. Bond yields are falling rapidly, which, on the one hand, indicates an increase in demand (and hence the possibility of financing the budget deficit), and on the other hand, the fall in yields will reduce the burden on the budget due to lower interest payments.

Moreover, an increase in demand for defensive assets means a simultaneous fall in stock markets, which is also unacceptable for both economic and political reasons. Will a comprehensive solution be found? The scenario in which the development of the next global financial crisis will go depends on the answer to this question.

Today, data on consumer inflation in July will be published, judging by the dynamics of the yield of 5-year bonds Tips, which were set the day before of the minimum at least from September 2016. Markets do not expect inflation to rise, which may fall from the June level of 1.6% to 1.4%. Such a result is quite capable of reinforcing negative sentiment and spur the demand for defensive assets.

In the absence of significant macroeconomic publications and relative stability due to the remoteness of Europe from the US and Chinese trade war, the euro is trading in the range, seeing no reason to leave it. This trend is likely to continue on Tuesday. Quotes may go slightly higher or lower depending on how much the ZEW index differs from forecasts.

The macroeconomic package published on Friday did not give the pound any chance to return optimism. Prom. production in June continued to decline, as did the volume of commercial investments in Q2. Also, the quarterly dynamics of GDP was clearly negative. 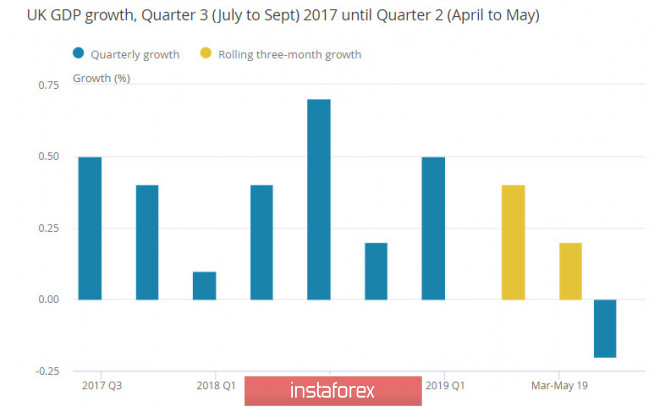 Boris Johnson expressed his willingness to find an alternative to Brexit, since leaving the EU without a deal would hit not only the UK, but the entire EU. This attempt at soft blackmail has not yet received appreciation from the EU, but it will obviously be received, and they are unlikely to be in favor of London. It was not Europe who started planning to part with Britain in order to profit from a future crisis, thus, London will probably not wait for easy decisions.

Today, data will be published on the labor market through June inclusive. Forecasts are neutral, on Wednesday - a report on consumer inflation, and on Thursday - on retail sales. Pound volatility may increase, however, the long-term direction remains unchanged - down and only down. Support for 1.2014 will most likely be updated today, with a next long-term minimum of 1.1932.

Performed by Kuvat Raharjo,
Analytical expert
InstaForex Group © 2007-2020
More articles by this author
Back to the list
E-mail subscription
Benefit from analysts’ recommendations right now
Top up trading account
Get a bonus from InstaForex