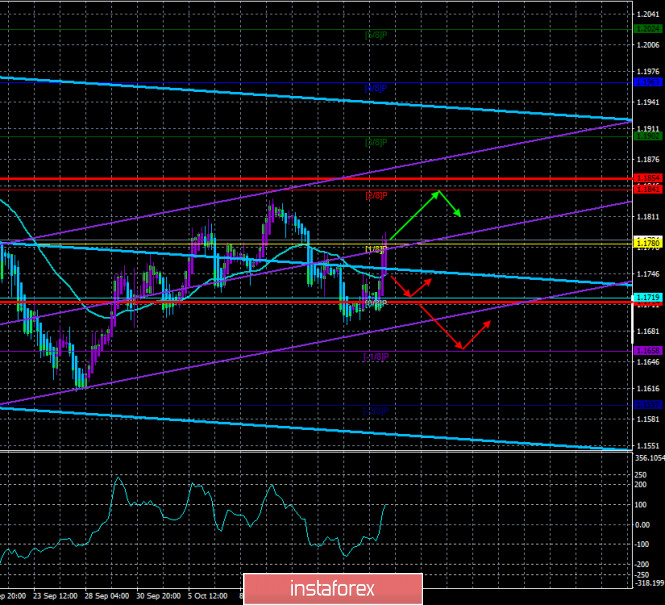 During the first trading day of the week, the EUR/USD pair started to grow sharply and unexpectedly for many. Although, from a technical point of view, this growth was even a little obvious. The fact is that if you look at the lower charts, you can clearly see that the pair once again failed to overcome the level of 1.1700, which for a long time was the lower line of the side channel of $ 1.17 - $ 1.19. Nothing else can explain the sharp rise of the European currency. Thus, the pair once again consolidated above the moving average line, and the trend changed to an upward one. However, over the past three months, this is an absolutely normal scenario. Recall that even if the quotes repeatedly go beyond the $ 1.17 - $ 1.19 channel, the main part of trading takes place in this range. Thus, formally, the flat is preserved in the long term.

The macroeconomic background has long been of no interest to market participants. We have repeatedly said why this is happening. The fact is that both the European and American economies suffered from the "coronavirus" and the subsequent "lockdown". When the "strict" quarantine measures were lifted, both economies began to recover synchronously. Thus, now all statistics are purely formal, as the economies of both countries continue to be in a state of shock. Yes, the US economy shrank three times as much in the second quarter as the European one, however, the euro has also grown by 13 cents against the dollar over the past six months. And reports like inflation or industrial production are now of no interest to anyone, because it is one thing to grow by 1% or decline by 1% in a quiet and peaceful time, but another thing – in times of crisis, when all reports show discouraging values.

On Monday, October 19, regular performances of Christine Lagarde and Jerome Powell, who have been performing very often lately, were scheduled. And most of their performances did not cause any market reaction. Here the situation is the same as with macroeconomic statistics. When the heads of central banks speak once a month and provide really important information about changing views on the economy or possible adjustments to monetary policy parameters, this information makes the markets worry and make trading decisions. When Christine Lagarde speaks with a frequency of once every two days and each time the rhetoric does not differ from the previous speech, then this news does not concern traders in any way. For example, yesterday Christine Lagarde said that new restrictions that are being introduced in all EU countries due to the second "wave" of the epidemic add uncertainty for businesses and households. In other words, Lagarde fears that the economy will start shrinking again and require an additional stimulus. However, just a couple of months ago, the EU agreed on a recovery fund for 750 billion euros, which has not even started functioning yet. Thus, a new downturn in the economy may cause new problems. However, Lagarde has previously stated that the probability of a second "wave" is high and the probability of new economic problems comes with it. So this is not news. The words of the head of the ECB that monetary policy should remain "soft" should not have come as a shock to traders either. And so it is clear that for a couple of years, the rates will at least remain at "ultra-low" values. Lagarde also said that by the end of 2020, the EU economy will lose from 8% to 12%. Given that Lagarde's rhetoric was negative for the euro, and the euro currency showed growth on Monday, it is unlikely that a parallel can be drawn between these two events.

Meanwhile, US President Donald Trump felt that he had not made loud statements about the "coronavirus" for a long time. Recall that many statistical agencies and media have estimated that it is Donald Trump who is the number one supplier in the world for improbable information about the COVID-2019 virus. This time, Trump said that listening to scientists on the issue of "coronavirus" does not make sense, since they will recommend introducing a full "lockdown" to stop the spread of the pandemic, which will "kill" the economy of any country. Trump is partly right. Indeed, it is because of the "lockdown", which was introduced in almost every country in the world in the spring, that the economy suffered the most. But also do not forget that we are talking about the lives of people, and the government of any country should take care of the most vulnerable segments of the population, who suffer the most from the crisis. This is why citizens pay taxes, and any state should have a reserve fund and a plan for such cases. So first of all, this is not the problem of American citizens and residents of the entire planet, but the problems of governments that were not ready for a pandemic either in the spring or in the fall. Also, Donald Trump said that Joe Biden becomes president, he will immediately close the country to quarantine, which will cause a powerful drop in the economy. "He will listen to scientists! If I listened to scientists, our country would be in a huge depression, and we are not a rocket ship," the US President said. He once again urged not to vote for Biden. The Democrats' headquarters immediately responded to Trump's new attack: "Donald Trump destroyed the economy inherited from Obama, ignoring the warnings of scientists and doctors who save lives around the clock."

Returning to the topic of the US election, The Economist magazine raised its forecasts for Joe Biden's victory. Earlier, after modeling the election, the magazine concluded that Biden would win the election with a 91% probability and gave him 341 "electoral votes" out of 538 possible. The new forecast suggests that Biden will get at least 347 votes with 270 needed to win. Also, all the latest research shows that Biden leads by a margin of at least 11% in the general vote. In addition, even most "contested" states tend to choose a Democrat. Thus, two weeks before Election Day, the balance of power between the two presidential contenders has not changed.

As for the prospects of the euro/dollar currency pair, we do not yet see how it can leave the approximate side channel with a width of 250-300 points. We believe that it will be extremely difficult for the US dollar to get more expensive before the election. The US currency had a chance to get ahead a little, taking advantage of the difficult epidemiological situation in the EU. However, trading on Monday already showed that buyers of the dollar are not particularly eager now. 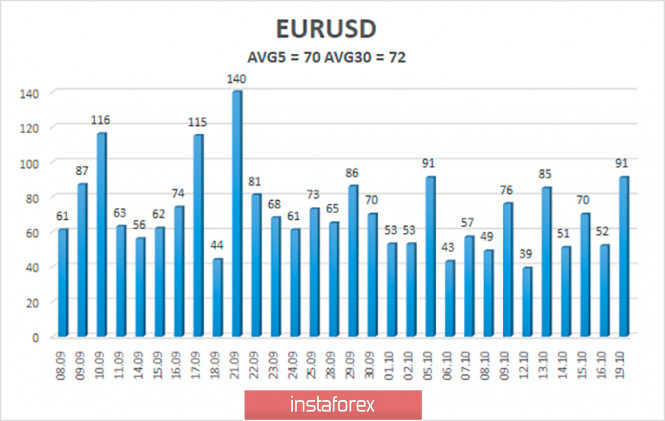 The volatility of the euro/dollar currency pair as of October 20 is 70 points and is characterized as "average". Thus, we expect the pair to move today between the levels of 1.1714 and 1.1854. A reversal of the Heiken Ashi indicator down may signal a new round of downward movement.