Forex Analysis & Reviews: How to trade GBP/USD on November 2? Simple tips for beginners. The pair has been flat all day 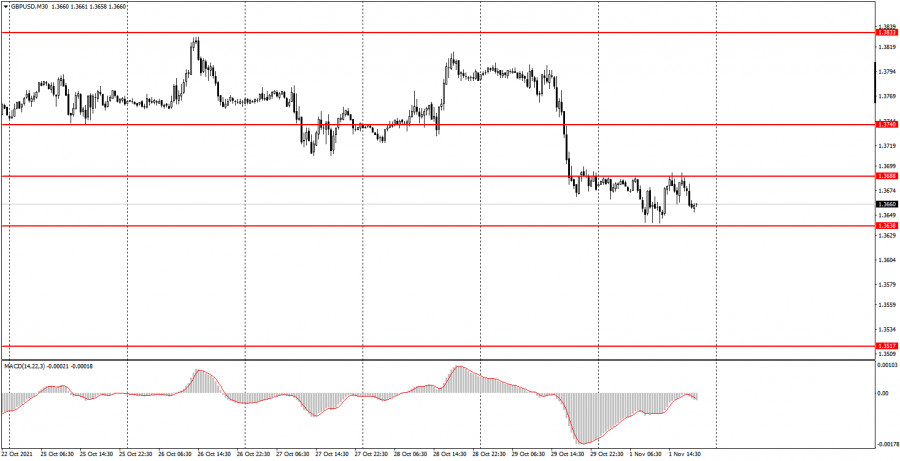 The GBP/USD pair on the 30-minute timeframe spent the entire first trading day of the week in a horizontal channel between the levels of 1.3638 and 1.3688. Thus, all day long, signals were formed near the upper and lower boundaries of this channel. As in the case of the euro/dollar pair, after quite active Thursday and Friday, today everything is back to square one, and the volatility was only 50 points. This value is extremely weak for the pound. A single US ISM manufacturing business report was published during the day. However, it had no effect on the pair's movement. Thus, Monday passed in a complete flat, and the trend or any of its manifestations is now absent. Based on this, we still do not recommend considering trading signals from the MACD indicator, which requires a clear trend and trend movement. 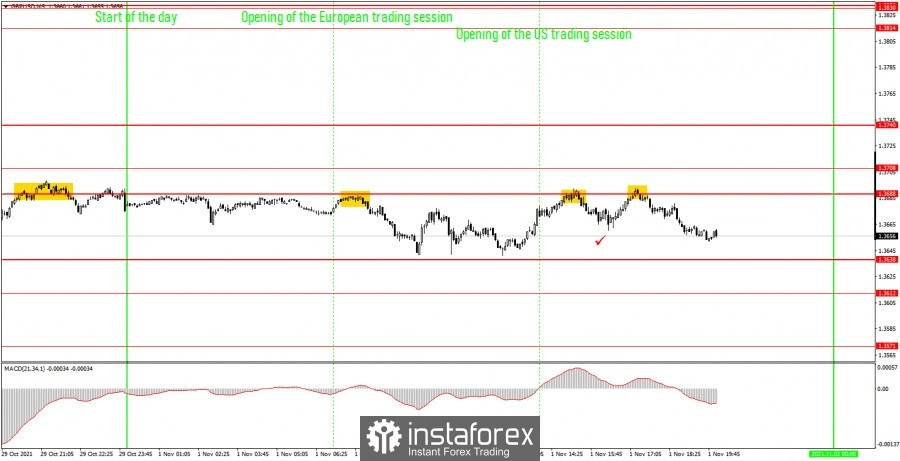 The technical picture on the 5-minute timeframe was even more eloquent on Monday. Typical flat. And novice traders are still very lucky that the price almost perfectly reached the boundaries of the horizontal channel, and in the middle of this channel there was no level near which a pack of false signals could form. And so only three sell signals were formed, all three near the level of 1.3688. Three buy signals could also have formed near the level of 1.3638, but each time the price did not reach literally a few points to this level. However, novice traders could make a profit only in case of profit taking near the level of 1.3638, without waiting for a rebound from it. The problem is that each time out of three the price went down at least 20 points, which was enough to place a Stop Loss order at breakeven. Therefore, no loss was received for any of the open trades. However, the highest that the pair went down on Monday was 30 points, so the least Take Profit could not be triggered, and the closest target level - 1.3638 - was not reached even once. Consequently, in the worst case, the beginners simply did not make any profit or loss on Monday. In the best case, they could have earned several dozen points.

At this time, there is still no trend on the 30-minute timeframe, and the volatility increased rapidly at the end of last week and quickly fell at the beginning of the new one. Since there is no trend, we do not advise beginners to follow the signals on the MACD indicator for some time. A trend movement is required for these signals to be relevant. The important levels on the 5-minute timeframe are 1.3612, 1.3638, 1.3688, 1.3708, 1.3740. We recommend trading on them on Tuesday. The price can bounce off them or overcome them. As before, we set Take Profit at a distance of 40-50 points. At the 5M TF, you can use all the nearest levels as targets, but then you need to take profit, taking into account the strength of the movement. When passing 20 points in the right direction, we recommend setting Stop Loss to breakeven. Novice traders can pay attention only to the index of business activity in the manufacturing sector of the European Union on November 2. This is not the most important report, so it is unlikely that it will have at least some impact on the movement of the currency pair.

The MACD indicator consists of a histogram and a signal line. When they cross, this is a signal to enter the market. It is recommended to use this indicator in combination with trend lines (channels and trend lines).

The dollar continued to weaken on Thursday, while precious metals prices, in turn, continued to rise. On Wednesday, XAU/USD broke the 1759.00 key resistance level (200 EMA) on its daily

The 105.00 support level on the DXY chart is still standing and resisting a breakout, and economists say the 105.00 level should keep the dollar index from falling deeper. From

In my previous analytical review, I drew your attention to the level of 1.2112 and recommended entering the market from it. Let's have a look at the 5-minute chart

In my morning review, I mentioned the level of 1.0421 and recommended entering the market from there. Let's see what happened on the 5-minute chart. As the euro fell amid

The previous trading plan in Bitcoin pointed out a possible increase in prices. This was realized yesterday, after a slew of negative news and Powell's less hawkish rhetoric

Powell's less hawkish rhetoric yesterday weakened dollar demand, which led to a strong rally in risky assets, including euro. This means that traders could consider long positions when entering

Inflation in the Eurozone has logged the first downtick from a previous month since June 2021.The Eurostat reported that the annual CPI rate eased to 10% in November from 10.6%

Trading plan for EUR/USD and GBP/USD on December 1

Inflation in Europe hit 10.0% in November, slowing for the first time since June last year. Of course, it is difficult to draw any conclusions from this, but the fact

Yesterday, there was only one entry signal. Let us have a look at the 5-minute chart and figure out what happened. In my morning forecasted, I highlighted the level

3883
Can't speak right now?
Ask your question in the chat.