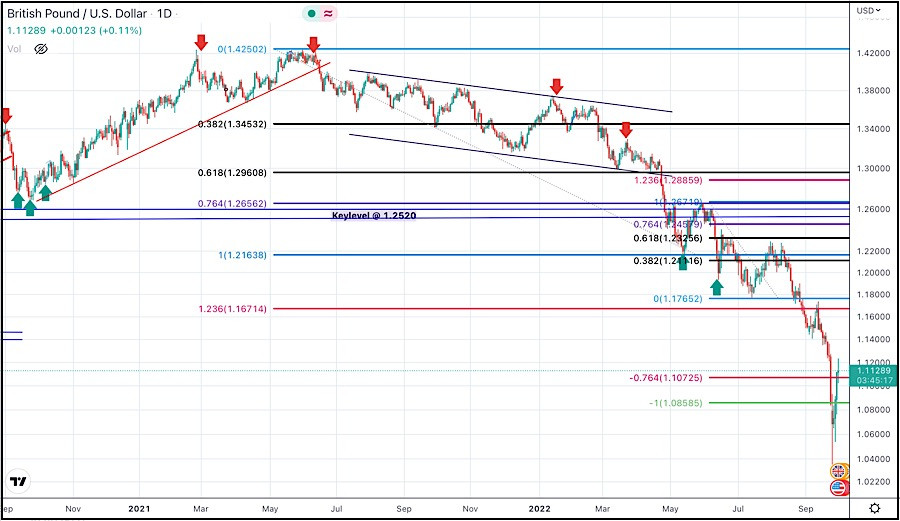 Previously, the GBP/USD pair remained under bearish pressure to challenge the lower limit of the channel around 1.3000 which failed to hold prices above.

Shortly after, a new daily low was established around 1.2150 which was bypassed few days after.

However, considerable support zone existed around 1.1850-1.1900 which has prevented further bearish decline for sometime.

However, as bullish momentum started to fade away, more bearish visits were expected to challenge these historical low levels.

Shortly after, Quick bearish decline was executed towards 1.1075 & 1.0860 where significant Fibonacci Expansion levels are located.

Based on the upcoming price action and the current weekly candlestick closure, the next target level for the GBP/USD pair can be determined.

Further bearish decline towards 0.9950 may be expected shortly unless the current re-closure above 1.0860 is maintained for some time. If so, the current scenari would be a high probability bullish pullback at least towards 1.1400.

Let's take a look at the technical picture for USD/CAD, AUD/USD

Technical Analysis of GBP/USD for December 7, 2022

Technical Market Outlook: The GBP/USD pair has been seen coming off the extremely overbought market conditions that were made during a bearish divergence between the price and the momentum indicator

Technical Analysis of EUR/USD for December 7, 2022

Technical Market Outlook: The EUR/USD pair has been seen testing the intraday technical support located at 1.0445, so any breakout lower will be considered bearish. A new swing high

EUR/USD Higher time frames Yesterday, bears continued to push the price lower but the movement was weak. Ahead is an obstacle presented by the support of the daily short-term trend

The pound-dollar pair may move downward from the level of 1.2128 (closing of yesterday's daily candle) to 1.2061, the 23.6% retracement level (yellow dotted line). In the case of testing

GBPUSD analsysis for December 00, 2022 - Potential for the upside continuation

Technical analysis: GBP/USD has been trading downside and the price has reached strong support at the price of 1.2100. I see potential for frutehr growth. Trading recommendation

The euro-dollar pair may move downward from the level of 1.0465 (closing of yesterday's daily candle) to the 1.0437 support level (thick blue line). When testing this level, an upward

Analysis of Gold for December 07,.2022 - Key support on the test and potential for fruther growth

Technical analysis: Gold has been trading sideways at the price of $1.773. Anyway, I see that key support is on the test and there is potential for the further growth

Euro is trading inside a range

EUR/USD A correction is seen in the US stock market. A strong support is needed to trigger a rally. With euro, the situation is different as it is moving within

4123
Can't speak right now?
Ask your question in the chat.