25.06.202210:28 Forex Analysis & Reviews: Analysis of the trading week of June 20-24 for the GBP/USD pair. COT report. The pound did not understand what to do with British inflation, and did not want to fall on Powell's speeches. 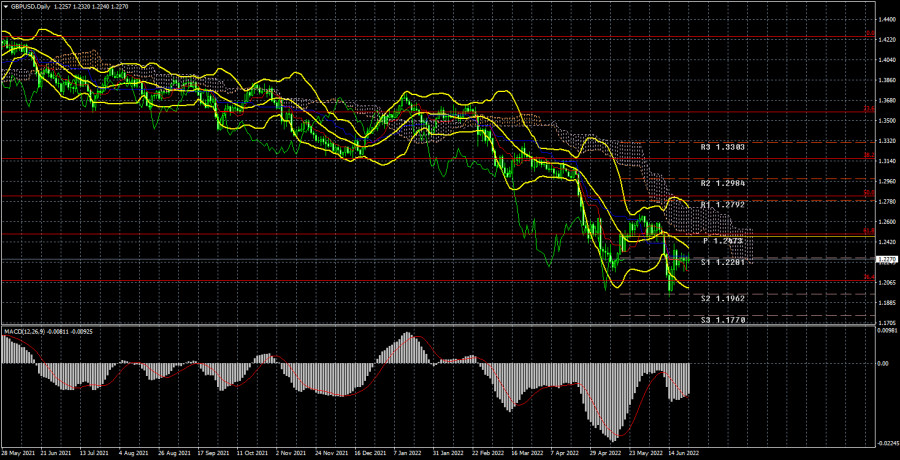 The GBP/USD currency pair has gained 40 points during the current week. In general, the pair was practically immobilized all week and was strictly under the critical line. Thus, the euro and the pound once again showed that they are trading almost identically. The only difference is that the euro is near its 20-year lows, and the pound is near 2-year lows. As you can see, even the fact that the Bank of England has already raised the key rate five times does not play any role for traders. We have already said in previous articles that this is most likely because the market is now completely focused on the US, the Fed, and the US currency, and practically ignores the other factors. That is, formally, the British currency now has grounds for growth, but they do not play any role now. Thus, we can only draw the same conclusion as before: the pound can show corrective, technical growth, but no more. As you can see, it has the same big problems when trying to overcome the critical line – the first obstacle on the way to the formation of a new trend. Not to mention something more. Jerome Powell's speeches in Congress this week only lowered the likelihood of a rise in the pound. Powell once again made it clear that the rate will continue to grow, at a much higher rate than those planned and expected at the beginning of the year. And the US business activity indices, which have already fallen to almost 50.0, did not provoke a dollar sell-off.

The latest COT report on the British pound again showed insignificant changes. During the week, the Non-commercial group closed 0.8 thousand buy contracts and 3.2 thousand sell contracts. Thus, the net position of non-commercial traders increased by 2.4 thousand. However, the mood of the major players remains "pronounced bearish". And the pound, despite the growth of the net position, still cannot start an upward trend. The net position has been falling for 3 months, which is perfectly visualized by the green line of the first indicator in the illustration above or the histogram of the second indicator. Therefore, two or three insignificant increases in this indicator hardly unambiguously indicate the end of the downward trend in the pound. The Non-commercial group has now opened a total of 92 thousand sales contracts and only 28 thousand purchase contracts. As you can see, the difference between these numbers is more than three times. Thus, in the case of the pound, the demand for the dollar remains high, and the demand for the pound itself remains low. What to expect from the pound/dollar pair with such input data? Moreover, we can see that neither macroeconomic statistics nor fundamental events support the UK currency. We can only count on corrective growth, but we believe that sooner or later the global downward trend will resume.

This week, business activity indices in the service and manufacturing sectors were published in the UK, which, admittedly, turned out to be better than in the US or the European Union. But not much better. Their values do not allow us to conclude that everything is fine in Britain now and there is no negative trend. Rather, on the contrary: business activity is also falling, just a little less quickly than in the United States or the European Union. And the report on British inflation showed that prices are growing at the same pace, even a little faster than a month earlier, and the indicator itself does not pay any attention to all the efforts of the Bank of England. Inflation rose to 9.1% y/y, which was exactly in line with forecasts. Therefore, the pound probably did not show a strong reaction to this report. Recall that traders like to react when the actual value of an important report does not coincide with the forecast. Nevertheless, the inflationary trend in the UK is even worse than in the States or in Europe. Inflation is higher, and all the efforts of the regulator pass "by the cash register".

Trading plan for the week of June 27-July 1:

1) The pound/dollar pair has started a new round of corrective movement, but there is still very little chance of a new uptrend. The pair could not work out the Senkou Span A line, and could not overcome Kijun-sen. Thus, purchases are not relevant now, and they can be considered no earlier than fixing the price above the Ichimoku cloud. The pair retains theoretical chances of growth, but the pound's position and the aggressiveness of the bulls are not at the level to be sure of growth.

2) The pound sterling, we can say, resumed the downward trend, as it consolidated below the critical line. Formally, a sideways correction could begin on the 24-hour TF, which is popularly called a "swing" or flat, but so far everything looks as if the fall will continue. Currently, sales with targets of 1.2080 and 1.1410 (76.4% and 100.0% by Fibonacci) are relevant.

Price levels of support and resistance (resistance /support), Fibonacci levels - target levels when opening purchases or sales. Take Profit levels can be placed near them.

Indicator 1 on the COT charts - the net position size of each category of traders.