16.08.202206:52 Forex Analysis & Reviews: Forecast and trading signals for GBP/USD for August 16. COT report. Detailed analysis of the pair's movement and trade deals. The British pound is also not thinking about the direction of movement. 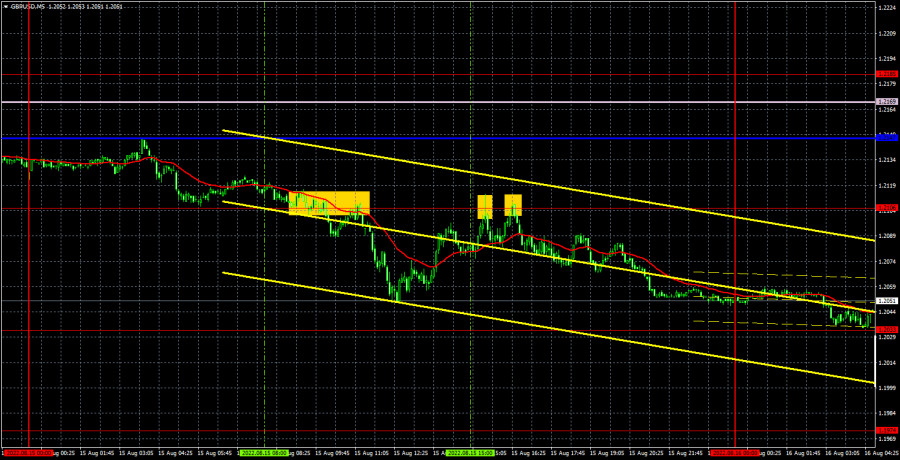 The GBP/USD currency pair continued its downward movement on Monday and fell 80 points on the day when no reports were published and there were no fundamental events. Thus, the euro and the pound in recent days show a perfect correlation with each other and move in the same direction. It is interesting that last week they grew synchronously after the release of the US inflation report. However, literally the next day after this event, which made everyone on the market nervous, the US dollar started to rise, which continues to this day. We still believe that the fundamentals remain negative for the euro and pound, so what we have seen in the last month is a simple correction within a long-term downward trend. The euro rose by 400 points, and the pound by 500. This is enough to resume the downward march.

The situation with trading signals for the GBP/USD pair was a little worse yesterday, but still several good market entry points were formed. First, the price overcame the level of 1.2106 at the very beginning of the European trading session, after which it managed to go down 40 points. However, it failed to reach the level of 1.2033 and returned to 1.2106. This signal can be considered false, and the deal could be closed by Stop Loss at breakeven. This was followed by two more rebounds from the level of 1.2106, after which the pair went down again 40 points. Toward evening, this deal should have been closed manually at a profit of 30-40 points. 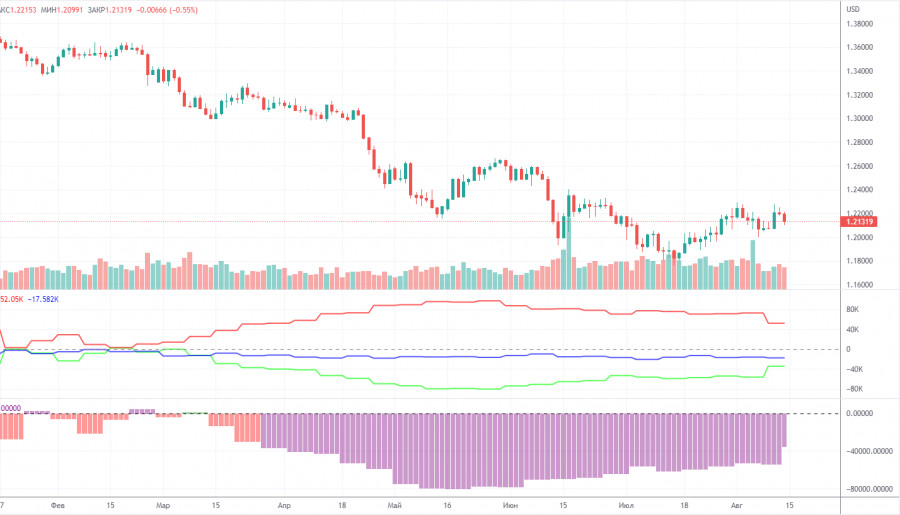 Overview of the EUR/USD pair. August 16. European inflation and GDP this week will show how close the European economy is to recession.

Overview of the GBP/USD pair. August 16. The pound seems to have exhausted all its growth potential.

Forecast and trading signals for EUR/USD on August 16. Detailed analysis of the movement of the pair and trading transactions. 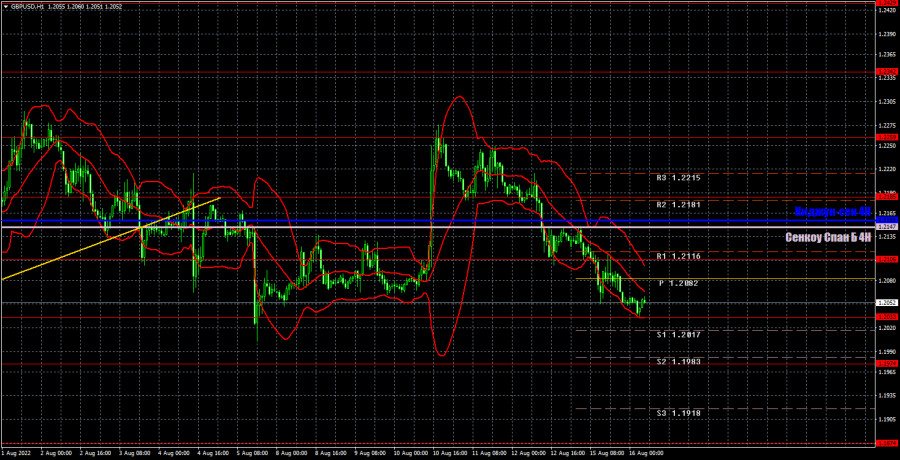 The pair failed to consolidate above the level of 1.2259 and fell to the level of 1.2033 on the hourly timeframe, from which the last round of growth began. Also, the price managed to overcome the lines of the Ichimoku indicator, so now the probability of further downward movement is very high. Or the pair will go into a flat state. However, there will be important macroeconomic statistics this week in the UK so we do not think that a flat will begin. We highlight the following important levels for August 16: 1.1874, 1.1974, 1.2033, 1.2106, 1.2185, 1.2259, 1.2342. Senkou Span B (1.2147) and Kijun-sen (1.2155) lines can also be sources of signals. Signals can be "rebounds" and "breakthroughs" of these levels and lines. The Stop Loss level is recommended to be set to breakeven when the price passes in the right direction by 20 points. Ichimoku indicator lines can move during the day, which should be taken into account when determining trading signals. The chart also contains support and resistance levels that can be used to take profits on trades. There is nothing interesting on the US calendar of events for Tuesday, but today the unemployment rate and the change in average wages will be released in the UK. This is not the kind of data that can provoke a strong reaction of the market, but still several tens of points of the pair can go under the influence of these reports.