Forex Analysis & Reviews: GBP/USD analysis for November 27. Scotland does not abandon attempts to terminate the union with the United Kingdom. 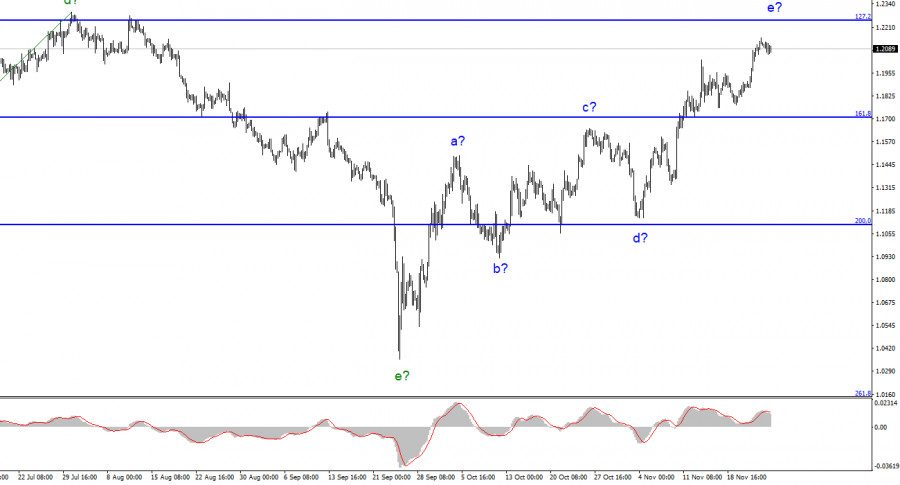 The wave marking for the pound/dollar instrument currently appears quite confusing, but it still needs to be clarified. We have a completed downward trend section consisting of five waves (a-b-c-d-e). We also have a five-wave upward trend section, which has taken the form a-b-c-d-e and can be completed. As a result, the instrument's quotes may continue to rise for a while. Still, the European currency has already begun (presumably) constructing a new downward section, and the British should do the same. As both central banks recently increased interest rates, the news backdrop could have been interpreted in any way. The week before last, we witnessed a decline in the dollar value relative to the news backdrop, which may have contributed to its potential new growth (Nonfarm Payrolls report). Then came the inflation report, which decreased demand for the dollar even though the opposite outcome might have occurred. The internal wave structure of wave e has been complicated due to the rise in quotes this week, but so far, only this wave and only part of the trend section have done so. This wave might have a longer form.

Nicola Sturgeon will research alternate exit strategies from the UK.

The expected wave e could continue to build because the pound/dollar instrument's exchange rate rose by several hundred points. The ruling of the Supreme Court of the United Kingdom on the petition for a second Scottish independence referendum was the week's main event. The court ruled that the Scottish Parliament cannot pass legislation calling for a new referendum without the British Parliament's consent. In addition, the court determined that Scotland lacks the authority to organize an "advisory" referendum. Let me remind you that First Minister Nicola Sturgeon has scheduled a purportedly "consultative" referendum for the second half of 2023. This referendum aims to determine the percentage of Scots who favor independence from the UK.

The Act of 1998, according to the court's chairman, Lord Robert John Reed, places all constitutional-related matters solely within the purview of the British Parliament. Based on this act, the Scottish Parliament resumed its session in 1999 and is endowed with limited authority. Nicola Sturgeon has previously said that she respects the court's decision but is disappointed. Because Scottish citizens did not support Brexit in greater numbers in 2016, she also said that Scotland would continue to look for ways to hold a referendum. The Scottish authorities "will find another way to express the will of the Scottish people," according to Sturgeon.

But as of now, I can only confirm one thing: Scotland does not currently possess the legal authority to hold a referendum and will not do so anytime soon. Therefore, the union between Scotland and Britain will not be broken. At the same time, Nicola Sturgeon plans to keep looking for ways to sever ties with Britain, but it isn't easy to envision what this path might entail given that all strands of the British government are connected in London. 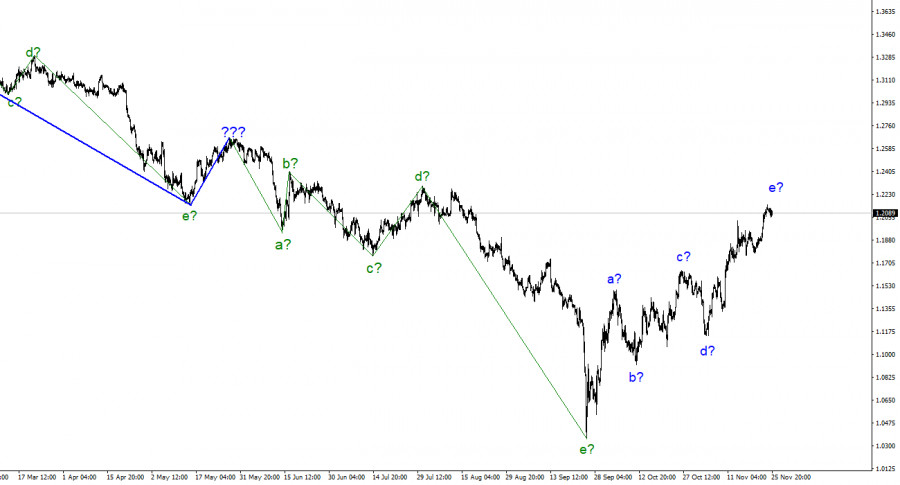 The construction of a new downward trend segment is predicated on the wave pattern of the pound/dollar instrument. I cannot suggest purchasing the instrument immediately because the wave marking already permits the development of a downward trend section. With targets around the 1.1707 mark, or 161.8% Fibonacci, sales are now more accurate. The wave e, however, can evolve into an even longer shape.

The Euro/Dollar instrument and the picture look very similar at the larger wave scale, which is good because both instruments should move similarly. The upward correction portion of the trend is currently almost finished. If this is the case, a new downward trend will soon develop.

1753
Can't speak right now?
Ask your question in the chat.