The GBP/USD currency pair made a small correction to begin the new trading week. The pound did not even consider growth on Monday, in contrast to the European currency, which increased significantly. This raises questions because if the euro's growth was unjustified, we could anticipate a similar increase in the British pound. However, since nothing similar occurred, Monday can be regarded as "the most strange." In addition to the decoupling between the euro and the pound, the euro's growth and volatility were also unexpected. But let's go back to the pound, which has also increased significantly over the past few weeks. We have repeatedly emphasized how the British pound had more justification from the start to appreciate against the dollar. Since the Supreme Court of Great Britain prohibited Scotland from holding an independence referendum without official consent from London last week, there have been even more this month. Although this is excellent news for the pound, keep in mind that, for instance, the BA rate is higher than the ECB rate. Additionally, Liz Truss' departure from the UK has changed the balance of power, leading to the last pound's collapse. Rishi Sunak, who is much more knowledgeable about economics than Truss, arrived. However, the British currency has far more reasons for growth than the European one. We think there aren't enough reasons for the pound to show such strong growth.

The pound/dollar pair also has everything you need to move north from a technical perspective. On the 4-hour and 24-hour TF, all technical indicators are initially pointing upwards. This is already sufficient for traders to engage in trading for growth. The pound sterling has the potential to increase in value for as long as it likes, even in the absence of robust macroeconomic and foundational support. It won't be possible, but it also won't look good. All we can do is continue the trend. You must not lose sight of the big picture; you must keep in mind that the pound currently lacks sufficient justification for rapid growth, but if the technique is bullish, selling would be foolish.

Is Jerome Powell able to defend the dollar?

The speech by Jerome Powell will be the main event this week. It is scheduled for Wednesday, and we are unsure of the Fed chairman's capacity to support the US dollar. It makes sense that the US dollar is currently declining because it is watching for a slowdown in the key rate's growth rate. If so, only one thing in Jerome's speech can defend the dollar. Powell must emphasize that growth can be slower but also longer and stronger. Undoubtedly, there is still time before the following Fed meeting. A new inflation report will be published, on which the Fed's monetary policy now depends almost entirely. Powell can, however, express what is expected of him on Wednesday. To say that the US dollar might fall once more in this situation is debatable.

Even the following image may exist from our vantage point. Even if only because a technical correction is required, the dollar is starting to increase this week. The pound should at least be corrected since it has been rising for several weeks without cause or justification. Additionally, Powell's speech will occur around the same time and may or may not have anything to do with strengthening the US dollar. It also applies to nonfarm on Friday. Regardless of the report's strength or weakness, the market is now demonstrating that it is prepared to trade trendily and volatilely, even without a fundamental and macroeconomic background. Macroeconomic reports can only indirectly affect the pair, despite how important they may be. Additionally, they can't possibly affect market sentiment or the development of trends on a global scale. 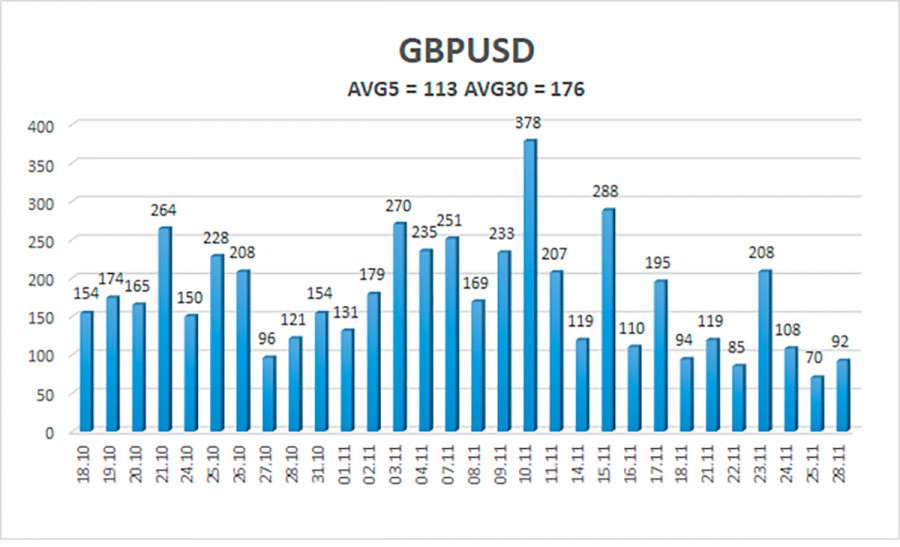 Over the previous five trading days, the GBP/USD pair has averaged 113 points of volatility. This value is "high" for the dollar/pound exchange rate. Thus, on Tuesday, November 29, we anticipate movement within the channel and are constrained by levels 1.1936 and 1.2160. The Heiken Ashi indicator's upward reversal indicates that the upward movement has resumed.

In the 4-hour timeframe, the GBP/USD pair began a feeble correction. Therefore, at this time, new buy orders with targets of 1.2146 and 1.2160 should be considered if the Heiken Ashi indicator reverses to the upside. With targets of 1.1936 and 1.1902, open sell orders should be fixed below the moving average.

1288
Can't speak right now?
Ask your question in the chat.