Forex Analysis & Reviews: Inflation in the European Union has decreased, what's next?

The most significant and fascinating report today concerned inflation in the European Union. I had more of a tendency to think that the slowdown would be negligible or nonexistent. The ECB rate has only gone up by 2% so far, and when compared to rates in the US or UK, inflation did not even consider declining. A consumer price index decline might be brought on by specific market or seasonal factors, and we might witness another acceleration the following month. I want to draw attention to how much the cost of the same oil has decreased in recent weeks. Prices could stop rising if they became less expensive because oil would become more affordable on global markets. The fact that core inflation has not decreased at all partially supports my hypothesis.

If the EU experiences a new decline in inflation in December, we can infer that the period of the inflation rate's reversal movement to 2% has begun. It is still too soon to make such judgments. As for the euro and its prospects, I've already mentioned that my current thinking is more based on wave marking, which, despite having already started to get more complicated, still foretells the formation of a downward trend section. We, therefore, require an increase in the demand for the US dollar. With it, the wave markup will become more complex and unintelligible. The market paid little attention because the decline in inflation had no impact on the euro's value. If this supposition is true, the new tightening of the ECB's monetary policy in December also won't matter much because the market frequently anticipates the future change in interest rates just before the release of the inflation report, which indicates what the regulator will do. Naturally, this assessment has been true for the past year, when regulators have only increased rates as inflation has continued to rise. 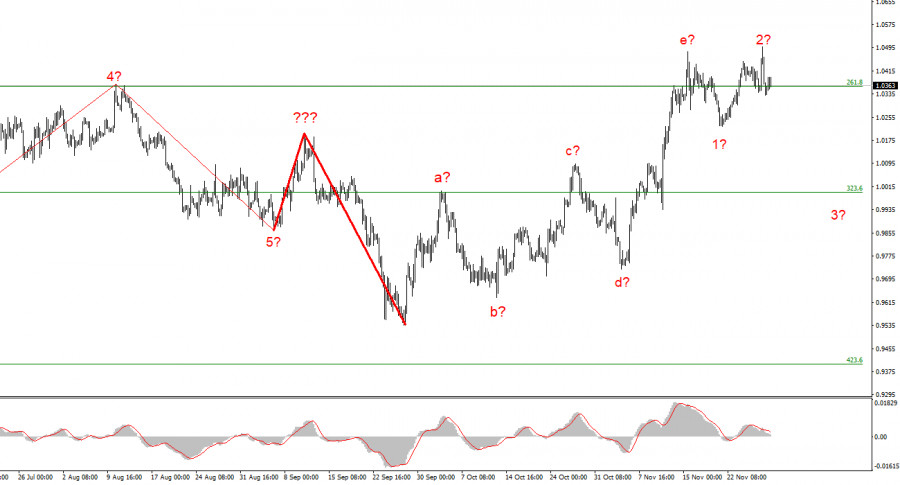 The market's lack of response to EU inflation is a significant indicator that it does not intend to boost demand for the euro further. I might be mistaken in my assessment, but I am still waiting for something to come to mind. When significant data on the US labor market are released on Friday, we'll see what transpires, but something tells me that neither of those events will mark a "turning point." The US dollar can only expect a steady increase over the long term. In addition, the instrument will not be able to drop below price parity any time soon. Since the Fed is beginning to ease up on policy tightening, it is getting harder to wait for a strong dollar increase. The rise in the euro currency is completely pointless now that the ascending wave structure is complete. While in a constrained price range, the instrument can move over time with correction structures.

The upward trend section's construction is complete and has increased complexity to five waves. As a result, I suggest making sales with targets close to the estimated 0.9994 level, or 323.6% Fibonacci. There is a chance that the upward section of the trend will become more complicated and take on an extended form, but this chance is currently at most 10%.