Forex Analysis & Reviews: How to trade EUR/USD on December 2, 2022. Simple trading tips and analysis for beginners 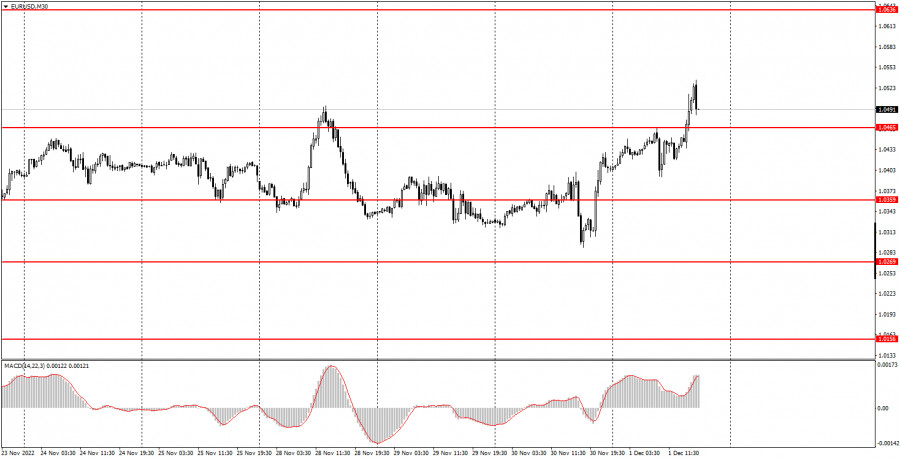 The EUR/USD rose on Thursday. Despite the fact that a sharp growth was observed on Wednesday evening, the euro still significantly rose today while everything looks like a flat or a "swing" on the 30-minute chart. Although the pair is staying near local highs and cannot correct to the downside, I still believe that the current movement is a flat. It's just that the flat is not in the 100-point range, but in a larger one. Federal Reserve Chairman Jerome Powell's speech on Wednesday, which started the dollar's fall and the euro's growth, does not even make much sense. Just because he did not say anything that was particularly new. Sure, his speech was important, but the market was already aware of such information. The market didn't even consider all the macroeconomic data that were released on that day, among which there were quite important reports. Perhaps only the GDP report managed to push the dollar to slightly strengthen, but at the same time, the ADP report was disappointing and so the market ignored it? On Thursday, there are no important events until the evening. The ISM reported that its manufacturing PMI fell to 49 in November, but that's when the dollar strengthened... 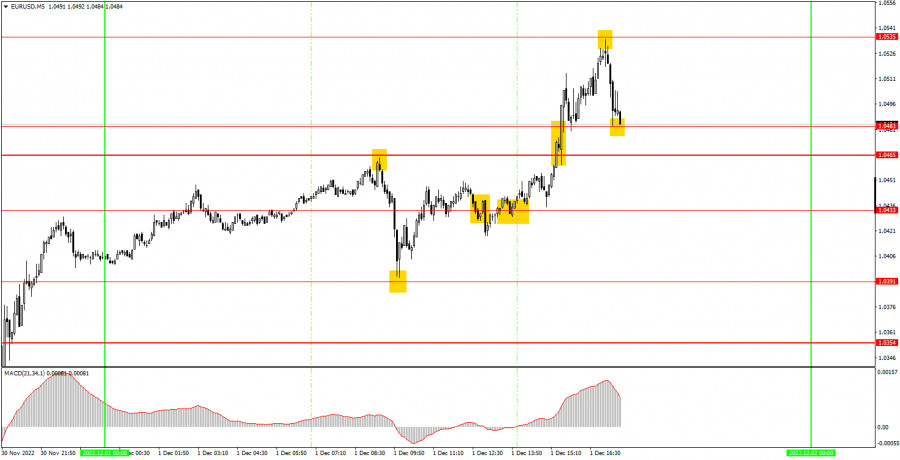 As for trading signals, the situation was not so bad. Although the pair changed direction several times during the day, it still reached key levels. The first sell signal was formed around 1.0465, afterwards the price fell to 1.0391, which was closed with an error of 2 pips. Thus, the short position should have been closed here, the profit was 35 pips, and a long position should have been opened. Unfortunately, a false sell signal appeared near 1.0433, so we had to close the long, open the short and then close it with a loss. You could lose 12 points on these two deals. This was followed by another buy signal around 1.0433, after which the pair rose to 1.0535, which also worked out with minimum error. The profit on this trade amounted to 75 pips and thereafter it was possible to open a short position, after which the pair fell to the nearest target level at 1.0483. Profit was another 30 pips. Thus, novice traders could make at least 130 pips profit on Thursday.

The uptrend has been canceled on the 30-minute time frame, but it may resurface. The pair is gravitating towards growth, but there is no ascending trend line anymore. The current movement is more like a "swing", so we can expect strong movement in either direction. On the 5-minute chart on Friday, it is recommended to trade at the levels of 1.0269-1.0277, 1.0354, 1.0391, 1.0433, 1.0465-1.0483, 1.0535, 1.0582-1.0607, 1.0636. As soon as the price passes 15 pips in the right direction, you should set a Stop Loss to breakeven. On Friday, traders will pay attention to the NonFarms Payrolls report. It measures the number of jobs added or lost in the US economy over the last month. European Central bank President Christine Lagarde will also deliver another speech. We could be in for another very volatile day.

1093
Can't speak right now?
Ask your question in the chat.