Until the price is above the $17,592 limit, it is too early to talk about any bullish signs. 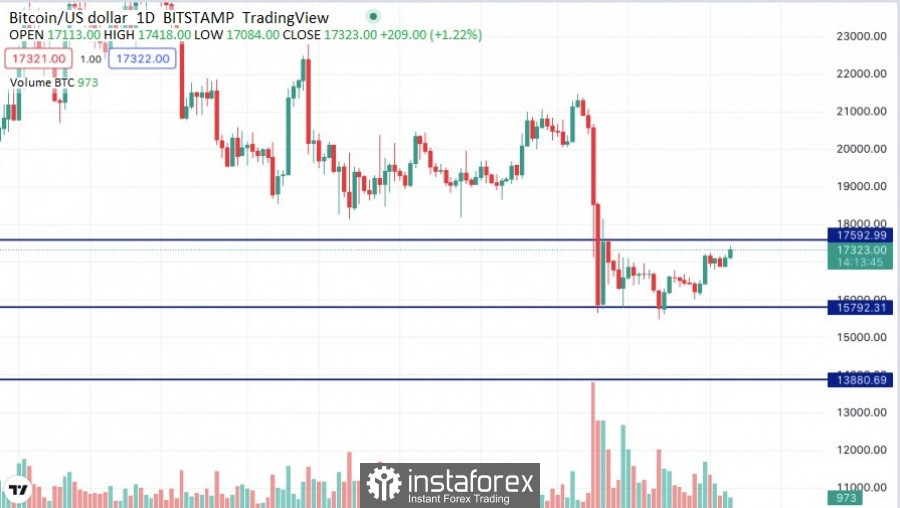 Nevertheless, prominent traders and analysts in the cryptocurrency community are increasingly predicting a move to a bull market.

Attention on realized price and DXY

InvestAnswers, a popular crypto analyst, says that on-chain signals suggest BTC is overdue for a rally.

The analyst examines Bitcoin's Realized Price (RP), which captures the value of all BTCs at the price they were bought, divided by the number of bitcoins in circulation.

InvestAnswers says that BTC never stays below the RP for long.

"We're counting down to the next halving and here we've been under the realized price... it's now 170 days and the actual price is under that RP of about $21,000, suggesting an upswing in the actual price.

And you can see how the Bitcoin price is pretty much, most of the time, above the RP... It's to the tune of like 97% of the time, 98% of the time it's above that. Now it's below. Now the question is, how does that shape up in history?"

InvestAnswers says that the rising weakness in the US dollar index suggests a likely rally. The index is inversely correlated to the risk-on assets, meaning that if it goes lower, cryptocurrencies go the other way.

"This is a pretty cool sign because as we know, as DXY goes up, Bitcoin goes down, and vice-versa. They are inversely correlated. If history repeats – and we've said that a lot lately – this chart signals a possible breakdown. If this does happen, this will be very good for the risk-on space as well."

Let's take our eyes off the current bear market and look at long-term forecasts. They are especially important after the collapse of FTX has once again shaken confidence in the industry.

Mark Yusko, the Founder, CEO and Chief Investment Officer of SEC-registered investment advisor Morgan Creek Capital Management, LLC, explained in a recent interview why he believes the long-term price of BTC will reach $250,000.

"In the future, Bitcoin will win because it is an asset that exists in the absence of liabilities, which is the definition of money. And so it is superior to gold. It has advantages in that it's more portable and more divisible than gold. So I think Bitcoin will eventually replace gold.

In the future, Bitcoin wins because it is an asset that exists in the absence of a liability, which is what the definition of money is. And so [BTC] is superior to gold. So it does have advantages in being more portable and more divisible than gold, so I think it will eventually replace gold.

$5 trillion, the monetary value of gold, roughly equals $250,000 price per Bitcoin. Now, it won't all happen tomorrow, but over time it's going to happen."

Crypto winter VS crypto-spring. Where are we?

Yusko also believes that the Fed will soon need to halt its quantitative tightening program, which should lead to the next bull cycle:

"I actually do believe crypto winter is over. I believe we're in crypto spring. I believe we have seen the bottom. That doesn't mean we can't retest it. It doesn't even mean we couldn't go a little bit lower than that, but I really do think that the cathartic unwind of the leverage in Bitcoin happened and I do think we're having a little follow through here with a 'buy the rumor, sell the news' about the merge."

"My personal belief is we're in recession.. I think the Fed could overtighten and break things... I think because of that, the Fed will reverse. When they reverse, we're going to have a face melter of a rally. I mean a face melter because the shorts are going to get scorched and the amount of shorts in crypto is massive."

Prerequisites for the mass appeal of cryptocurrency

Back in August, Yusko pointed out that the crypto industry needs to work on simplifying cryptocurrency wallets to gain mass appeal.

Yusko, who admitted to being a fan of hardware wallets, said that many retail investors have been paralyzed by the choices offered by various cryptocurrencies.

He noted several good options currently on the market, such as Ledger, but characterized mass crypto adoption as requiring a more simplified process.

Yusko also mentioned that a merging of smartphones and crypto wallets would provide much more appeal to the average user, making it so that crypto supporters wouldn't have to worry about complexities such as seed phrases and private keys.

He suggested that making crypto wallets invisible would lead to "gazillions" of people adopting crypto.

793
Can't speak right now?
Ask your question in the chat.