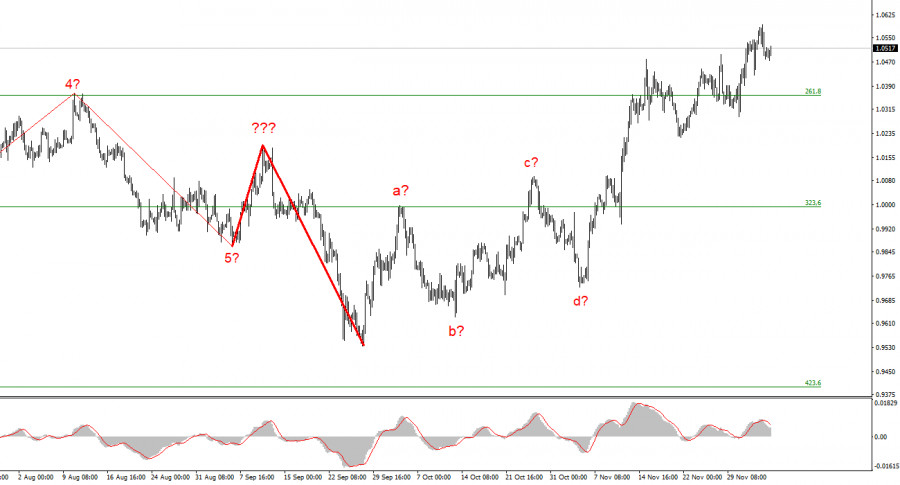 The euro/dollar instrument's 4-hour chart still has a very convincing wave marking, but the entire upward trend section is getting more complicated. It has already assumed a clear corrective and somewhat prolonged form. We have obtained a complex correction structure of waves a-b-c-d-e, in which the e wave has a much more complex form than the first four waves. Since wave e is much higher than the peak of wave C, if the wave markings are accurate, construction on this structure may be nearly finished. In this instance, it is anticipated that we will construct at least three waves downward, but if the most recent phase of the trend is corrective, the subsequent phase will probably be impulsive. Therefore, I am preparing for a new, significant decline in the instrument. The market will be ready to sell when a new attempt to breach the 1.0359 level, which corresponds to 261.8% Fibonacci, is successful. The last decline of the instrument, however, is not the first wave of a new descending section; rather, the rise in the instrument's quotes over the past few weeks suggests that the entire wave e may end up being longer. Consequently, the scenario involving the first two waves of a new downward trend segment is rejected. Because there is no increase in demand for US currency, the wave pattern starts to become muddled and complex.

There are no reports for this week or today.

On Tuesday, the euro/dollar instrument increased by 20 basis points. Such a small amplitude perfectly matches the absence of the current news background. Although only two reports out of five or six had a significant impact on the market mood, yesterday should still be regarded as extremely busy. Although the demand for US dollars has slightly increased, it hasn't picked up enough to guarantee the completion of the anticipated wave e's construction or the entire upward trend segment, which ought to have ended a few weeks ago. I cannot alter the wave layout in the light of everything stated above.

The third quarter GDP report from the European Union is scheduled to be released tomorrow, but I wouldn't advise readers to start rubbing their hands together in excitement. The indicator will receive a third and final evaluation, which might coincide exactly with the first two. The market is unlikely to discover reasons for a significant increase or decrease in demand for the euro currency, even if it diverges slightly from them. After this report this week, all that will be left for us to look forward to is Christine Lagarde's speech on Thursday and the University of Michigan's consumer sentiment index on Friday. Christine Lagarde already spoke on Monday, but as of right now, not even the news feeds mention it. As a result, Lagarde did not make any significant remarks, and the same may occur on Thursday. The ECB meeting will take place this month. The president and the monetary policy committee members are very reticent to comment on potential changes or decisions that may be made in the 1-2 weeks before the meeting. I anticipate Lagarde to leave the information out. If the value is wholly unexpected, I'll only wait for a response to a consumer sentiment index. 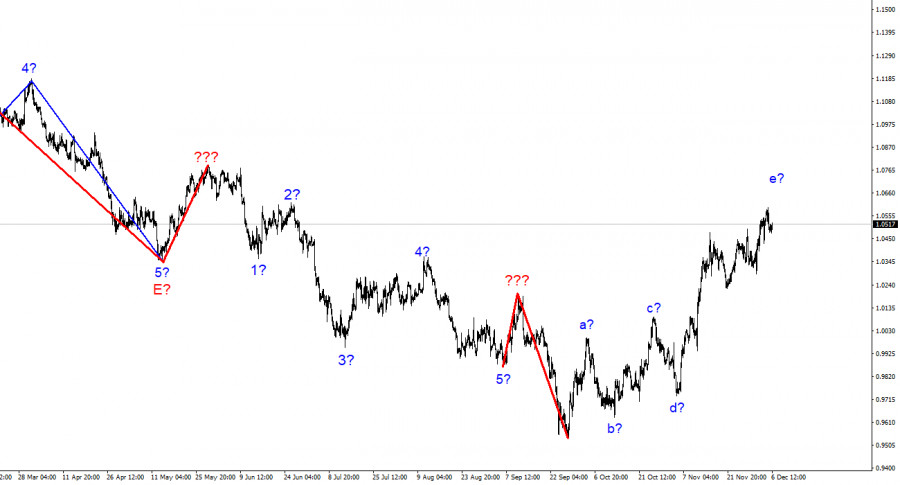 The upward trend section's construction has grown more intricate and is almost finished. As a result, I suggest making sales with targets close to the estimated 0.9994 level, or 323.6% Fibonacci. The likelihood of this scenario is increasing, and there is a chance that the upward portion of the trend will become even more extended and complicated.

1468
Can't speak right now?
Ask your question in the chat.