The CCI indicator can be applied in two ways:

Deviation occurs when a price hits a new peak but the CCI indicator fails to rise above the previous highs. Usually, this classic deviation is followed by a price correction.

2. For defining overbought or oversold zones 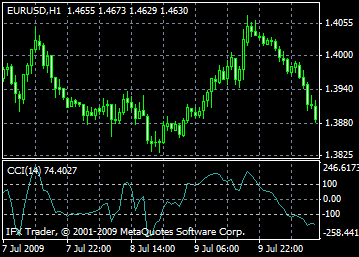 1. Find the average price. For doing that it is necessary to add the highest and the lowest closing price of every bar and divide the sum by 3:

2. Calculate the n-period simple moving average of the average prices:

3. Subtract the obtained SMA(TP,N) from the average prices TP of every preceding n period:

HIGH – the maximum price in a bar

LOW – the minimum price in a bar

N – a number of periods used for calculation.