Yesterday, traders received several interesting signals to enter the market. Let's take a look at the 5-minute chart to figure out what really happened. Earlier, I asked you to pay attention to the level of 1.2174 to decide when to enter the market. The pound sterling dropped amid the UK inflation data. A false breakout below 1.2174 led to a perfect long signal. As a result, the pair returned to 1.2245, allowing traders to earn more than 70 pips. However, we failed to open short orders from 1.2245 since the pair lacked just several pips to form a false breakout. In the second part of the day, bears protected a new resistance level of 1.2231, giving a sell signal. However, after a 15-pip drop, demand for the pound sterling resumed rising. A break and consolidation above 1.2231 during the US trade as well as a buy signal allowed traders to make an 80-pip profit. The price lacked just several pips to test 1.2317, preventing the formation of a sell signal. 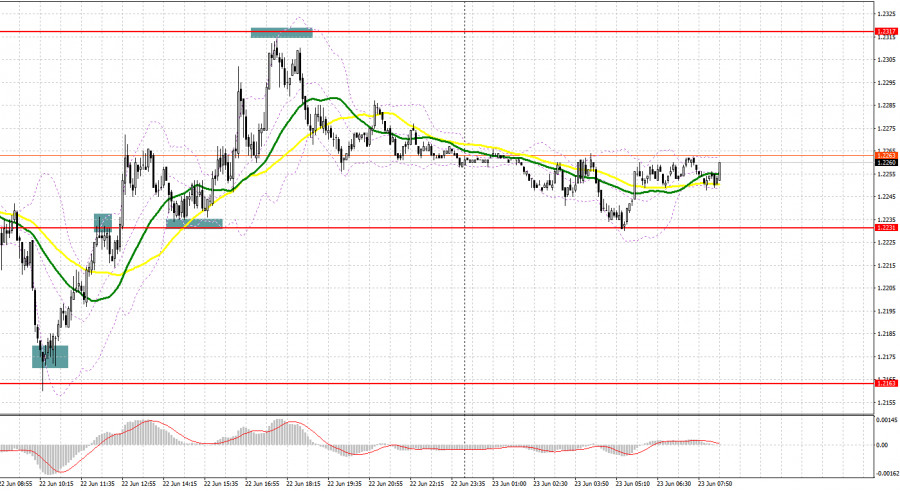 According to the report published yesterday, in April, the UK consumer prices accelerated to 9.1% from 9%. Retail prices increased more than expected up to 11.7%. There are a lot of signals of surging inflationary pressure in the wholesale sector. Higher prices of raw materials is the main driver of consumer prices. However, the pound sterling managed to recoup its losses. The fact is that the Bank of England suppose that inflation may climb to 11.0% by the end of the year. That is why it intends to combat inflation using all available methods. Today, the UK is going to disclose its June report on business activity. If the data is strong, the pound sterling may return to last week's high. If in the first part of the day, pressure on the pair maintains, bulls will have to do their best to push the price to the middle of the range at 1.2231. That is why only a false breakout of this level will give a long signal with the target at 1.2317. This level is of crucial importance for bulls. If they manage to gain control over it, the pair will be able to resume the uptrend formed on June 14. A break and downward test of 1.2317 will give a buy signal with the target at 1.2400. A break of this level will lead to a new buy signal with the target at 1.2452, where it is recommended to lock in profits. The next target is located at 1.2484. However, this scenario will become possible only in case of dovish rhetoric of Jerome Powell. If the pound/dollar pair drops and buyers fail to protect 1.2231, pressure on the pair will jump. In this case, it will be wise to go long after a false break of the lower limit of the range at 1.2163. It is also possible to buy immediately after a bounce from 1.2102 or lower – from 1.2030, expecting a rise of 30-35 pips.

Bears have every chance to revive the downtrend. Now, it is very important to prevent buyers from moving above 1.2317. A false breakout of this level after the UK PMI data will give a perfect sell signal with the target at 1.2231, an intermediate level a break of which may lead to a sell-off. In this case, the pound/dollar pair may slide to the lower limit of the range. Only settlement below 1.2231 and upward test will provide traders with a short signal with the target at 1.2163, where it is better to partially lock in profits. The next target is located at 1.2102. If the price tests this level, buyers will be defeated. If the pound/dollar pair increases and bears fail to protect 1.2317, the pair will be able to hit the nearest resistance level only thanks to Jerome Powell's speech. A false breakout of this level will give a good entry point with the expectation of any downward correction. If bears fail to protect 1.2400, the pair may jump. In this case, traders should avoid selling until the price hits 1.2452. After that, we should wait for a false breakout. Sell orders could also be initiated from 1.2484 or higher – from 1.2516, expecting a decline of 30-35 pips. 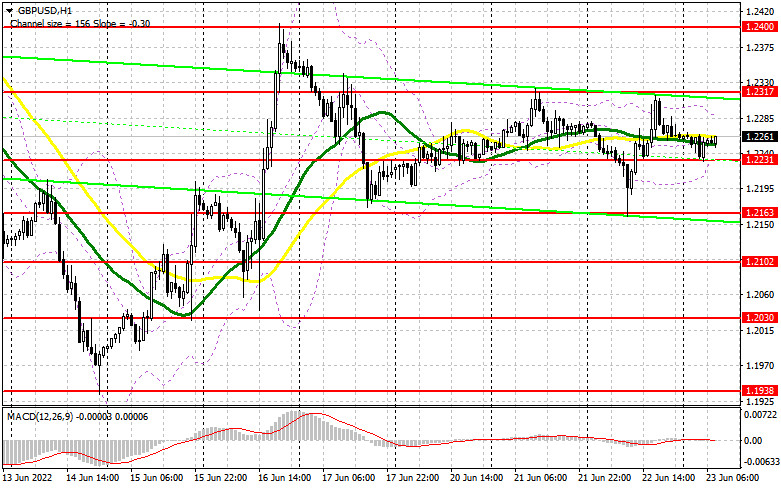 According to the COT report from June 14, the number of both long and short positions dropped. The pound sterling gained in value after the BoE's meeting. The regulator said that it would continue following its plan to combat high inflation. The rise in the currency is likely to affect the next COT report. Big players are benefiting from the situation and buying a cheap pound, regardless of the negative economic factors. However, the pair is unlikely to recover in the near future since the Fed's policy will considerably prop up the greenback against risk assets. The COT report unveiled that the number of long non-commercial positions dropped by 5,275 to 29,343, whereas the number of short non-commercial positions decreased by 10,489 to 94,939. As a result, the negative value of the non-commercial net position slid to -65,596 from -70,810. The weekly closing price decreased to 1.1991 against 1.2587.

Trading is performed around 30- and 50-day moving averages, which points to the market uncertainty.

Note: The period and prices of moving averages are considered by the author on the one-hour chart that differs from the general definition of the classic daily moving averages on the daily chart.