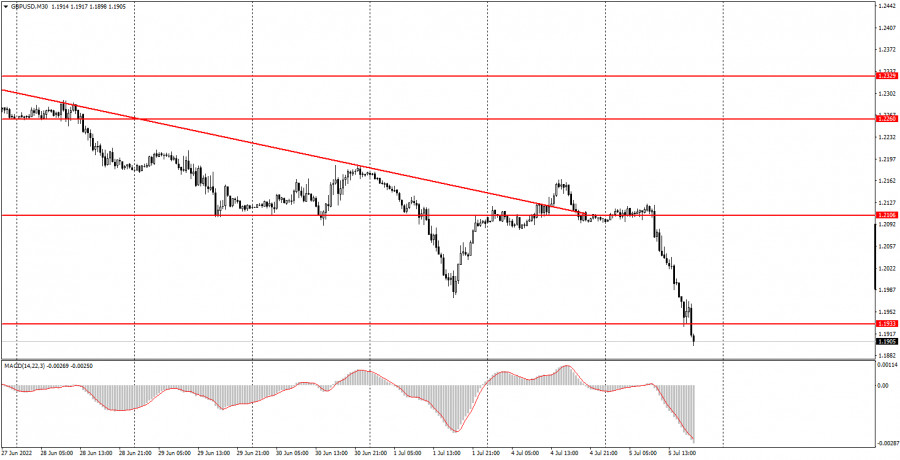 The GBP/USD pair also collapsed on Tuesday, as did the EUR/USD. Thus, both pairs showed a collapse, both currencies depreciated against the dollar by about 2 cents, and in both cases there were no prerequisites for this. As in the case of the euro, the downward trend continues for the pound, but the trend line managed to cancel yesterday. We said that it is of a rather formal nature and its breakthrough does not mean at all that a new upward trend will now begin. The pound still cannot oppose the US dollar, just like its "colleague" from Europe. That is, theoretically, it can fall as much as necessary. Of course, the pair cannot move in the same direction all the time, so corrections happen from time to time. If you look at the 4-hour or daily time frames, then the corrections will naturally be larger. But in general, they remain weak for any timeframe. So far, we do not see any reason for the pound to stop falling against the dollar in the long term. The index of business activity in the UK service sector was published today, which turned out to be worse than expected, but it is unlikely that it provoked a fall of 200 points. 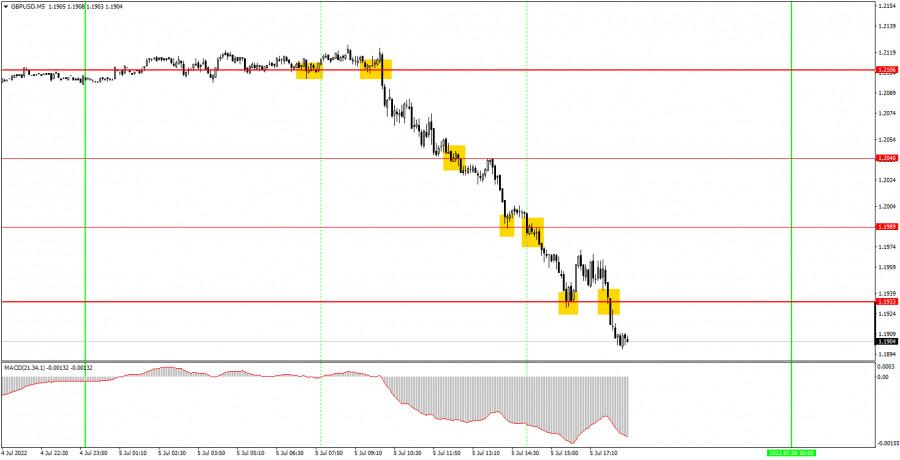 The trading signals for the pound were also very good on the 5-minute timeframe, although not as excellent as for the euro. The trend movement allowed novice traders to make very good money. Let's start with the analysis of trading positions. The first signal to buy near the level of 1.2106 turned out to be false and resulted in a loss of 18 points for beginners. However, the very next buy signal turned out to be very good, and the pair fell to the level of 1.1989, from which it initially rebounded. Thus, the short position should have been closed on this rebound, and it made a profit of 94 points. The buy signal also had to be worked out, and it also turned out to be false. The trade closed at a loss of 26 points as the price settled below 1.1989. However, this sell signal also had to be worked out, and it brought a profit of 31 points, as the price again reached the nearest target level of 1.1933. It worked and rebounded again, forming the third buy signal for the day, which again turned out to be false, but at least closed at breakeven on Stop Loss, since the price managed to go up 20 points. The last sell signal for consolidating below 1.1933 could also be worked out, but it also closed at breakeven. Thus, in almost any case, traders made solid profits today.

The pair continues to move ambiguously on the 30-minute timeframe. The downward trend is clearly visible, but there are simply no levels below 1.1933, as the price is currently at its 2-year lows. The pound is likely to continue to fall, as there are no factors speaking in its favor now. On the 5-minute TF on Wednesday, it is recommended to trade at the levels of 1.1933, 1.1989, 1.2040, 1.2106. When the price passes after opening a deal in the right direction for 20 points, Stop Loss should be set to breakeven. The UK is set to publish an index of business activity in the construction sector for June, and the US will release its index of business activity in the ISM services sector. We believe that if the nature of the movement and Tuesday's volatility persist on Wednesday, then the macroeconomic background will not play any role for the market.