06.08.202215:24 Forex Analysis & Reviews: EUR/USD analysis on August 5. American statistics did everything they could to help the dollar. 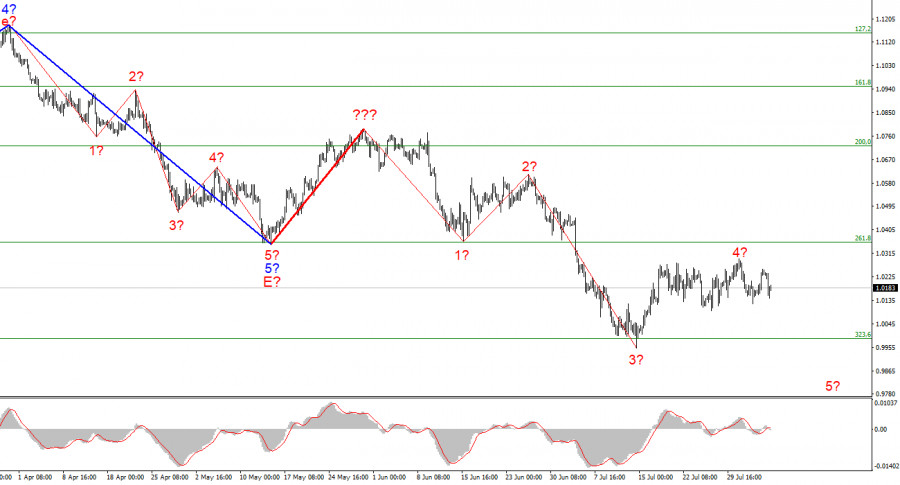 The wave marking of the 4-hour chart for the euro/dollar instrument does not require new adjustments. I recently built a new wave markup that does not yet consider the rising wave marked with a bold red line. The whole wave structure can be complicated an unlimited number of times. It is the disadvantage of wave analysis since any structure can always take a more complex and extended form. Therefore, now I propose to work on simpler wave structures that contain waves of a lower scale.

As you can see, the construction of a descending wave has presumably begun, which may be wave 5 of a new downward trend section. If this assumption is correct, the instrument will continue to decline with targets below 1.0000. The supposed wave 4 took a three-wave form and surprisingly coincided with the peak of the supposed wave 4, according to the British. Thus, perhaps this is the moment the market has been waiting for. The euro and the pound are now coinciding in their wave markings, suggesting a new decline. The wave pattern may still take a more complex form, which we would like to avoid, but the wave pattern looks very convincing at the moment.

Payrolls and unemployment turned out to be very strong.

The euro/dollar instrument declined by 60 basis points on Thursday. The market traded the instrument very calmly for most of the day, but in the afternoon, three important reports were released in America at once, and all three turned out to be strong enough for the demand for the American currency to begin to increase again. I would even say more: there were only three reports, and there were four reasons for the market to buy the dollar. It turned out that the Nonfarm Payrolls report was much better than expected (250 thousand), and its value in July was 528 thousand. However, the previous value for June was revised from 372 thousand to 398 thousand. Thus, one report, but its two values turned out to be better than what the market was waiting for. And then, two more reports came out, which also impressed the market.

From the unemployment rate, even the biggest optimists hardly expected that it would continue to decline. It is at the lowest value in half a century at 3.6%. It was until July, as yesterday it became known about its decline to 3.5%. At the same time, wages increased by 0.5% monthly with expectations of +0.3% m/m. Thus, all three reports turned out to be strong, and I am a little surprised that the US currency rose so weakly on Friday. The passivity of the market in recent weeks may play a role here. Although the peak of wave 4 has been detected, and it seems that the wave marking does not require adjustments, we have observed more horizontal movement in the last few weeks. So far, three waves are being viewed inside wave 4, and the first and second of five are being viewed inside the proposed wave 5. But for the current wave markup to be maintained, a new increase in demand for the US currency is needed. If not, then the current structure may be broken.

Based on the analysis, I conclude that the construction of the downward trend section continues. If so, it is now possible to sell the instrument with targets located near the estimated 0.9397 mark, which is equivalent to 423.6% Fibonacci, for each MACD signal "down" in the calculation of the construction of wave 5. Wave 4 can be completed. 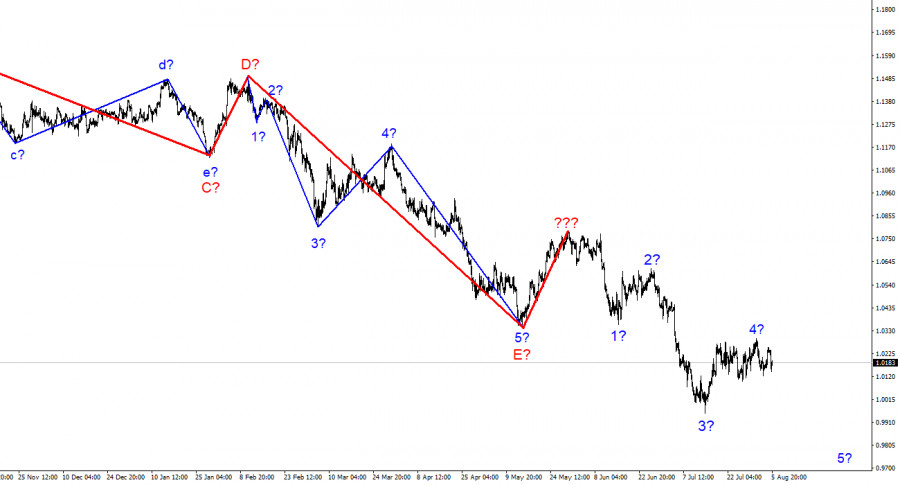 At the higher wave scale, the wave marking of the descending trend segment becomes noticeably more complicated and lengthens. It can take on almost any length, so I think it's best to isolate three and five-wave standard wave structures and work on them.