Hot forecast and trading recommendations for EUR/USD on May 18, 2020

A trend is such a powerful thing that anything can happen, but this will not change the general direction of movement. We received clear evidence that there is a steady trend in the market at the very end of last week.mWhile it is completely incomprehensible what can change it. 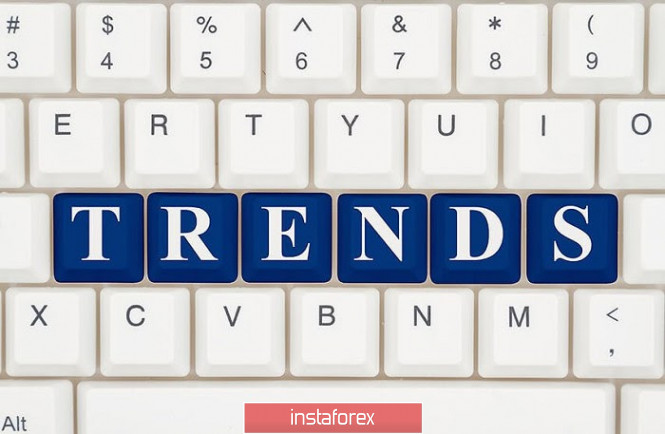 To begin with, the market completely ignored the data on eurozone GDP for the first quarter. Although it was not surprising. According to the results of the first quarter, the economic recession in Europe reached -3.2%. Although, the economic growth rate was 1.0% in the fourth quarter of 2019. Restrictive measures due to the coronavirus, on which everyone is responsible for the recession in the economy, were introduced only in mid-March. That is, at the very end of the quarter. But the lack of reaction is quite easily explained by the fact that we are talking about a second assessment, which did not differ much from the first, showing that the pace of economic recession was -3.3%. And this has long been included in the value of the single European currency. So this data did not bring anything new. 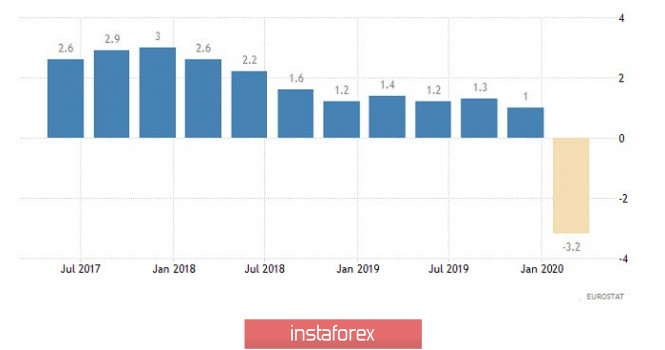 Market participants were interested in US data, and this was accompanied by a steady weakening of the dollar. And it looks quite logical. After all, the pace of decline in retail sales accelerated from -5.7% to -21.6%, and this is the worst result in just over a quarter century. This was not the case even in 2008-2009. The decline then was noticeably less. Moreover, the decline then occurred somewhat more smoothly. And here - sharply and swiftly. 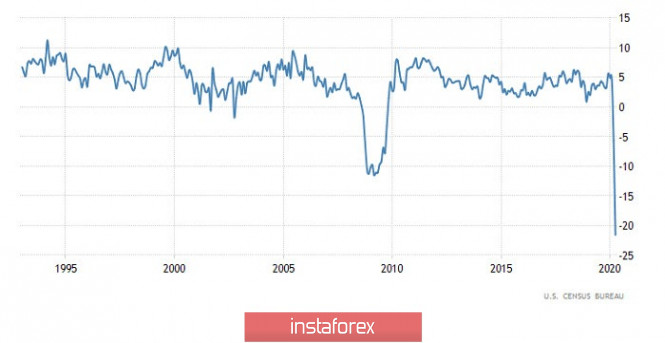 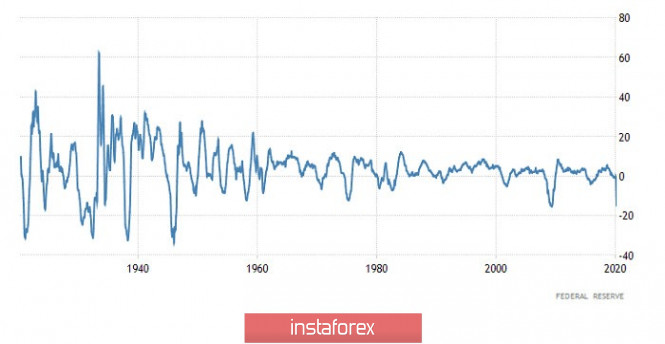 But the most interesting thing began to happen a little less than an hour after the publication of data on industrial production. The dollar began to confidently recoup its losses. It doesn't matter that the April statistics turned out to be really incredibly bad. Yes, it was expected that the pace of decline in industrial production would be somewhat larger. But the retail situation is really amazing. These results clearly say that the recession will only intensify, which means that the current crisis in any case becomes protracted. But the dollar stubbornly refuses to fall in price. Even incredibly bad data can only make it cheaper for a while. But no more than that. And pretty soon, the dollar wins back all its losses. This is the notorious trend. And it consists in the fact that investors are well aware that the situation will not be any better in other countries. It's just that the United States quickly publishes macroeconomic statistics. Others are still reporting for March. So in relation to what is happening right now in Europe, or where else, there is some uncertainty, which is also scary. In addition, since everyone compares the current economic crisis with the Great Depression, we must remember that the restoration of the global economy began with the United States. So investors proceed from the fact that now the situation will happen again. So, it's better to place money in advance where it will start to make a profit earlier. Moreover, there is at least some clarity regarding the situation in the United States. And from this a very simple conclusion follows that today, in the conditions of a completely empty macroeconomic calendar, a single European currency will at best stand still. Even some scandalous statements by politicians or revelations of bankers can only lead to short-term growth of the single European currency. This will not change the overall picture and trend.

From the point of view of technical analysis, we see a consistent downward movement, where the quote found a foothold in the area of the support level of 1.0775. This coordinate has long been focusing on itself market participants, where a rebound is systematically formed towards the mirror level of 1.0850. In fact, the regularity formed a variable corridor between the two levels, the duration of which is seven trading days.

In terms of a general review of the trading chart, the daily period, it is possible to highlight a number of inertial fluctuations, which are brought together by a downward trend.

It can be assumed that trading forces are still concentrated between the levels of 1.0775/1.0850, where it is possible to work both on local operations, within the established band, and on its breakdown, focusing on the main changes.

We specify all of the above into trading signals:

From the point of view of a comprehensive indicator analysis, we see a variable signal inside the established band, where minute and hour intervals signal a purchase, but the day period invariably adheres to the main downward trend. 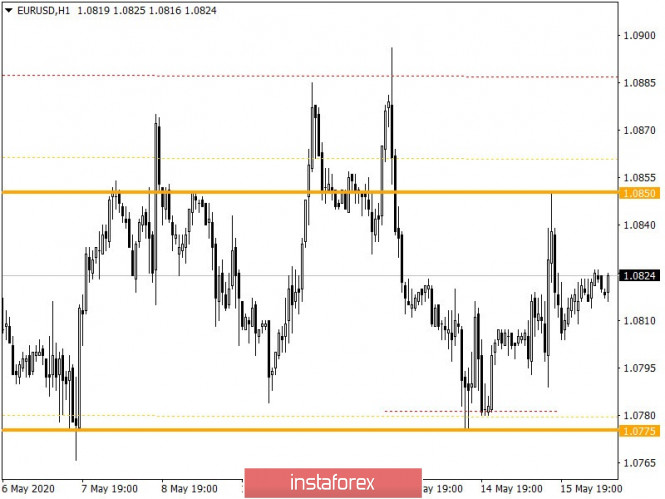 Hot forecast and trading recommendation for EUR/USD on June 1, 2020
Discrepancies in US data, along with protests that have already developed into full-fledged clashes with the police, are clearly not conducive to strengthening
Hot forecast and trading recommendations for EUR/USD on May 29, 2020
It seems that the market is gradually returning to normal and is increasingly responding to published macroeconomic data, which may negatively
Outlook for EUR/USD on May 28th, 2020. Trading recommendations
The single currency was boosted by the announcement of a new plan of the EU economy support. However, some time later, market participants focused on the prospects.
Show more
Close