The data released yesterday confirmed the negative dynamics of the US economy: the final release of the report by the U.S. Bureau of Economic Analysis confirmed the decline in GDP in the 2nd quarter by -0.6% after falling by -0.6% in the 1st quarter.

What is it, if not a recession? The US government prefers to avoid this definition, characterizing this process as "negative growth."

Against the background of the publication of data on GDP, the positive report of the US Department of Labor with weekly data on jobless claims was ignored by market participants. The number of initial claims for unemployment benefits fell from 209,000 to 193,000. Perhaps in vain, given the publication next week of key data from the US labor market.

The positive momentum of recovery is expected to continue, which allows Fed officials to continue to fight inflation at an accelerated pace, which is bullish for the dollar and bearish for gold prices.

One way or another, today, buyers of the dollar are trying to seize the initiative again, although the sellers do not want to give in and are reluctant to give up their positions.

After a strong fall on Wednesday, when the dollar index (DXY) lost more than 1%, and a further decline on Thursday, the dollar is recovering today, with its DXY index rising 17 points above yesterday's closing price.

However, this growth is not yet sustainable, given the continued decline in US government bond yields. And yet, it is impossible to disregard the fact that the Fed's monetary policy, at the moment, remains, perhaps, the toughest among the world's largest central banks, and most of the major market players prefer to remain on the side of dollar buyers for the time being, characterizing its current decline as long overdue correction.

Atlanta Federal Reserve Bank President Raphael Bostic said on Wednesday that "the base case for now is a 75 basis point rate hike in November and a 50 bps hike in December." In his opinion, the lack of progress in curbing inflation means that by the end of the year, the Fed will have to set rates in the range of 4.25%–4.5%.

The Fed's super-tight monetary policy cycle is an undeniably strong positive fundamental factor for the dollar and negative for gold.

As you know, gold quotes are extremely sensitive to changes in the monetary policy of the world's leading central banks and, especially, the Fed. However, other major world central banks (BoE, RBA, RBNZ, ECB, SNB) also stand in the way of tightening their monetary policies. Despite the high risks of a recession in the economy, the fight against inflation remains a key issue for them.

Gold does not bring investment income but is in active demand during geopolitical and economic uncertainty, and a protective asset in the face of rising inflation.

Today, the XAU/USD pair continues to grow, taking advantage of the weakness of the dollar. However, as we noted above, despite the long-overdue correction, the dollar maintains its upward momentum, while the XAU/USD pair broke (the week before last) the key and long-term support level of 1690.00, jeopardizing the entire long-term bullish trend of gold. 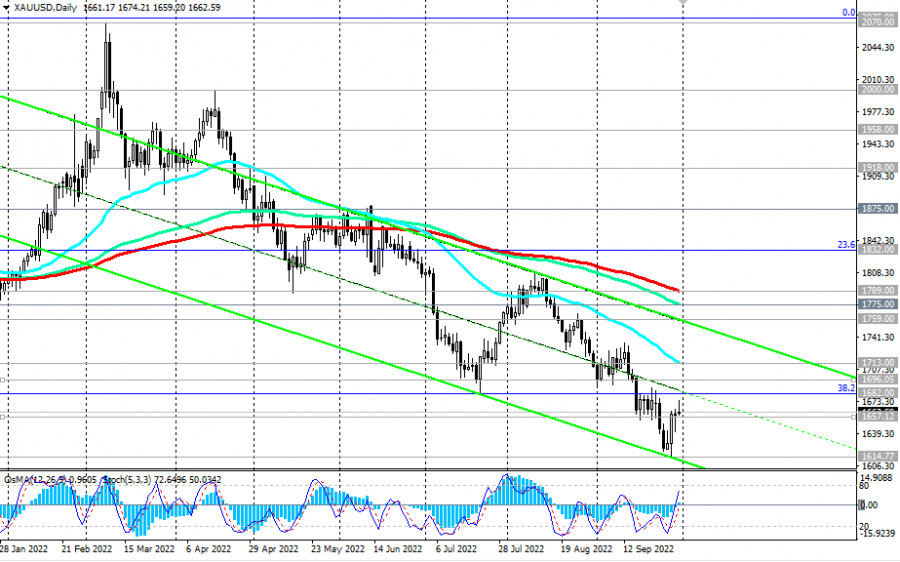 The negative dynamics of XAU/USD prevails, and the breakdown of the day before yesterday's local low (since May 2020) of 1614.77 will confirm our assumption and become a signal to increase short positions on the pair.

And from the news for today, we are still waiting for the publication (at 14:00 GMT) of the final release of the University of Michigan consumer confidence index. This index is a leading indicator of consumer spending, which accounts for most of the total economic activity. It also reflects the confidence of American consumers in the economic development of the country. A high level indicates economic growth, while a low level indicates stagnation. Data better than the previous values or forecast should support the dollar, which will allow dollar sellers to lock in profits in short positions on it (previous indicator values: 58,2, 51,5, 50,0, 58,4, 65,2, 59,4, 62,8, 67,2 in January 2022. The preliminary estimate was: 59.5).

Gold jumped almost $200 an ounce from the levels of November lows, and in anticipation of important statistics on US inflation and the Fed meeting, buyers decided to fix part

Markets are troubled by the growing fears that the Fed will change its mind on interest rates due to the recent positive data on the US economy. They worry that

The acceleration of business activity in the US services sector from the ISM sent EURUSD to a knockdown, but during the European trading session, the euro began to recover. This

USD/CAD: ahead of the Bank of Canada meeting

The ISM reported yesterday that business activity in the US services sector grew at an accelerated pace in November: services PMI rose to 56.5 (against the forecast of growth

Possible scenario for next year

Markets are underestimating several unexpected scenarios for next year, according to Standard Chartered. The list includes Bitcoin falling to $5,000 and gold rising to a new all-time high of $2,250

OPEC decided not to change production quotas for its members. Earlier, the group agreed to cut the amount by 2 million barrels per day, which drew

The ECB and the Bank of England can emulate the Fed's actions without waiting for the Fed to do so first.

After a string of similarly bizarre days, Monday was very strange. Many people are already perplexed as to why the euro and the pound continue to rise even on days

GBP/USD. Overview for December 6. Does the British pound have a bright future?

On Monday, the GBP/USD currency pair also started to adjust after the euro. Except for the retail sales report, which only applied to the European Union, the British pound

EUR/USD. Overview for December 6. The Fed will keep rates at the maximum level for at least 18 months.

On Monday, the EUR/USD currency pair made a small adjustment but is still above the moving average line. As a result, we can only discuss a rollback, not a correction

8818
Can't speak right now?
Ask your question in the chat.