The forex market needed a correction. Therefore, it used Germany's PPI data, which hardly ever causes such a strong impact, as the opportunity to enter it. However, once it became known that producer prices in Germany slowed down to 34.5% from 45.8%, the euro instantly plummeted by about 100 pips. Indeed, the reading had been expected to fall to 42.0%. In light of such a steep decline, we may now assume that inflation in the eurozone may soon go down. Consequently, the ECB will have no reason for aggressive tightening in the future. Germany's data is clearly not enough to conclude about the entire euro area. Still, it was enough to trigger a correction in the market, especially in the face of the excessively oversold greenback.

No important macro releases are scheduled in the eurozone for today. In this light, the trend movement stopped yesterday and the market started to stabilize near the previously reached levels. Therefore, a sideways trend is highly likely today.

The EUR/USD pair was in a downtrend on Monday. After a breakout through 1.0300, the overbought euro entered a correction.

The RSI confirms the corrective movement on the H4 chart. The indicator broke through line 50 to the downside, signaling an increase in selling volumes.

The Alligator's moving averages signal a bearish reversal on the H4 chart, which is also in line with the correction. In the daily time frame, the indicator still shows an uptrend, ignoring the corrective movement. 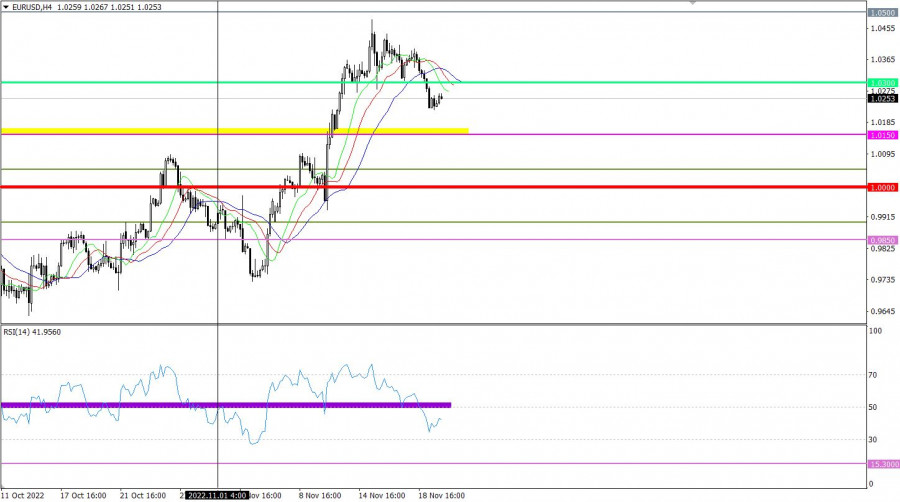 If the correction continues, the quote may fall to 1.0150. This level is seen as support, so a rebound may take place.

If the price consolidates below 1.0150 on the H4 chart, it may show an impending reversal.

As for complex indicator analysis, the corrective movement gives a sell signal for short-term and intraday trading. In the medium term, there is a buy signal.

Hot forecast for EUR/USD on 03/01/2023
Given the results of yesterday's European Central Bank meeting, the dollar has nothing to do but rise, but not today, since it could be under pressure later on..
Breaking forecast for GBP/USD on February 2, 2023
The Federal Reserve slackened the pace of the key rate hike. Now, everything depends on the Bank of England, which is raising the benchmark rate a bit more actively.
Breaking forecasts for EUR/USD on February 1, 2023
Today, the eurozone is going to disclose important macroeconomic reports. However, traders are likely to ignore them as everyone will focus only on the FOMC meeting results.
Show more
Analysis Articles Fundamental Analysis Trading Plan Cryptocurrencies Technical Analysis Breaking Forecast
All Analytics
Breaking Forecast Trading Plan Cryptocurrencies USD/RUB Russian Economy Video Analysis
Trading Instruments
EURUSD GBPUSD USDCHF USDCAD USDJPY AUDUSD EURGBP EURJPY NZDUSD EURNZD Silver Gold #CL #USDX COVID-19 Bitcoin

1723
Can't speak right now?
Ask your question in the chat.