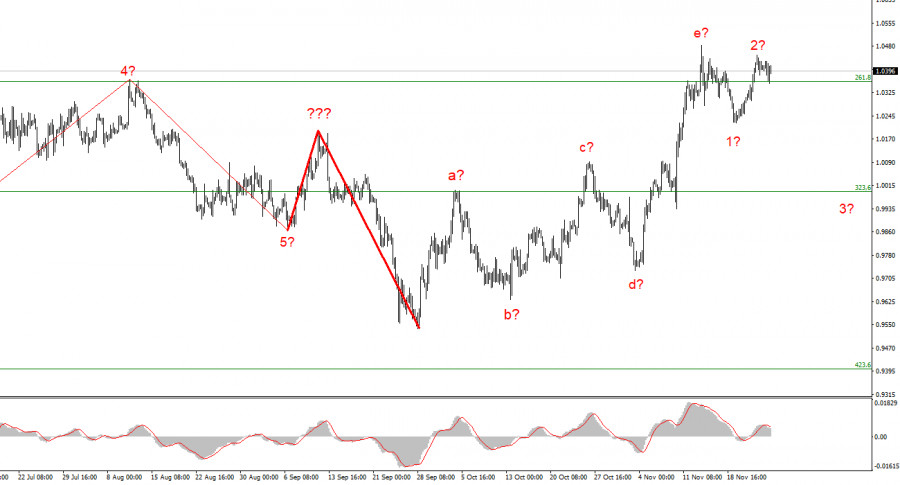 The wave marking on the euro/dollar instrument's 4-hour chart is convincing. The upward portion of the trend has corrected itself. Initially, I believed three waves would develop, but it is now abundantly clear that there are five waves. As a result, the waves a, b, c, d, and e have a complex correction structure. If this supposition is accurate, the building of this structure may have already been finished since the peak of wave e is higher than the peak of wave C. In this instance, it is anticipated that we will construct at least three waves downward, but if the most recent phase of the trend is corrective, the subsequent phase will probably be impulsive. Therefore, I am preparing for a new significant decline in the instrument. The market will be ready to sell when a further attempt to breach the 1.0359 level, which corresponds to 261.8% Fibonacci, is successful. The peak of the anticipated wave e was still present, so removing quotes from the lows this week did not violate the wave marking. As a new downward trend segment, most likely segment 2 or b, the most recent increase in quotes can be seen as an internal correction wave. Wave e and the upward portion of the trend will likely take a more extended form if an attempt to break through its current peak is successful.

Rates will keep rising, according to an ECB vice president.

This week, the euro/dollar instrument experienced positive dynamics. The demand for the euro currency was increasing despite the absence of reports and news. This allowed the instrument to develop an upward wave that still needed to deviate from the established wave pattern. However, the instrument's decline should start as early as Monday or Tuesday to preserve the integrity of the wave marking. A wave 3 or C is supposed to be built right now.

The ECB Vice President Louis de Guindos' speech last week was the most interesting for the euro. There were two performances, though they were barely distinguishable from one another. According to De Guindos, the European Central Bank's interest rate will increase in the upcoming months because the European Union's inflation rate is still "indecently high," and the slowdown in economic activity cannot result in a decrease in the consumer price index. As no one who participated in the foreign exchange market questioned further tightening monetary policy, I cannot say that de Guindos' statement sparked a commotion there. The likelihood that the rate will increase further, though, is growing. The euro currency benefits from this, but wave analysis and the news background are now at odds. While the news background suggests an increase, the waves suggest a decrease. We may see both in the end. The tool can create a third wave of a descending trend before starting a new upward trend segment. However, a descending wave needs to be constructed first. If not, the wave markup might become much more difficult to read. 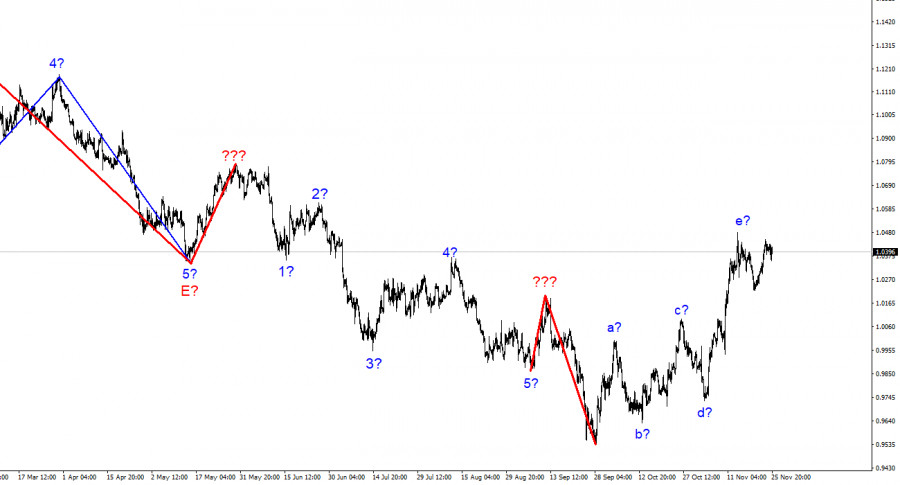 Based on the analysis, the construction of the upward trend section is complete and has become more complicated with five waves. As a result, I suggest making sales with targets close to the estimated 0.9994 level, or 323.6% Fibonacci. There is a chance that the upward section of the trend will become more complicated and take on an extended form, but this chance is currently at most 10%.

1468
Can't speak right now?
Ask your question in the chat.