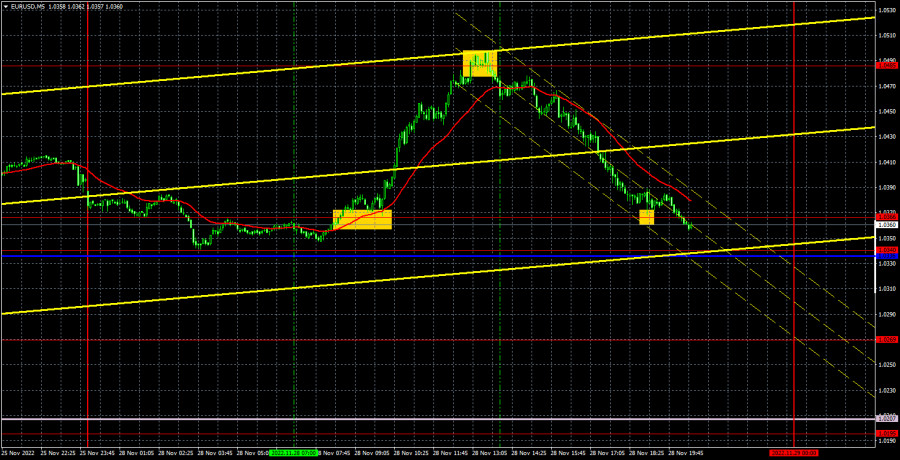 On Monday, the euro/dollar pair showed certain movements that are quite difficult to explain. It started to sharply rise early in the morning and crossed a distance of 150 pips. Then it began to fall by the same amount in the afternoon. The only fundamental background was European Central Bank President Christine Lagarde's speech, which took place in the evening, so it could not have provoked such movements. Therefore, the pair has reached 1.0485, near which the previous local high was formed, and sharply fell. I believe that this pullback could be the start of the long-awaited bearish correction, which I already mentioned last week. The price may cross the critical line in the near future, which will be another technical factor for the fall. I expect the Senkou Span B line to be the first target, but the correction might be much stronger, since the euro's growth for the past few weeks was not quite logical and reasonable.

As for trading signals, yesterday's situation was almost perfect. At the beginning of the European trading session, the price broke through the level of 1.0366, after which it rose to the nearest target level of 1.0485 and rebounded from it. Therefore, traders had to open a long position first, and then - a short position. They managed to earn about 90 pips on the first position, and also the same amount on the second one since the price went back to the level of 1.0366. As a result, two deals, good profit. 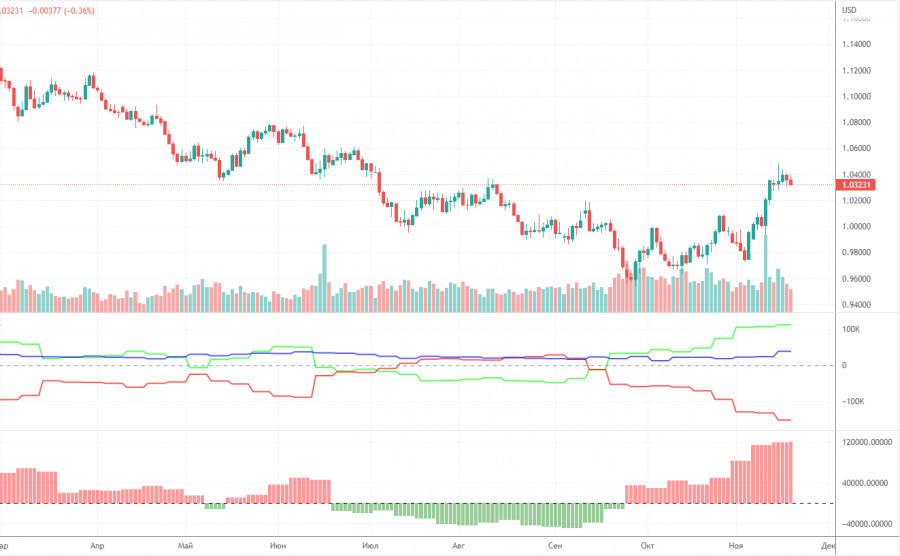 As for Commitment of Traders (COT) reports in 2022, they reflected bullish sentiment in the first six months of the year although the euro was bearish. Then, they illustrated bearish sentiment for several months with the euro being also bearish. Currently, the net position of non-commercial traders is again bullish and increasing. Meanwhile, the euro has hardly retreated from its 20-year lows. This is due to the fact that demand for the greenback is high amid a difficult geopolitical situation in the world. Therefore, despite a rise in demand for the euro, buoyant demand for the dollar does not allow the euro to strengthen. During the reporting week, the number of long positions held by non-commercial traders rose by 7,000 and that of short positions increased by 2,000. Consequently, the net position advanced by 5,000. The euro's recent growth is gradually coming in line with the figures illustrated in the COT report. Still, the greenback may resume growth under the influence of geopolitical factors or the lack of factors for further strengthening in the euro. The green and red lines of the first indicator moved far away from each other, which may indicate the end of the uptrend. The number of long positions exceeds that of short positions by 113,000. Therefore, the net position of non-commercial traders may continue to rise further, but without triggering a similar rise in the euro. When it comes to the total number of longs and shorts across all categories of traders, there are now 39,000 more short positions (635,000 vs 596,000). 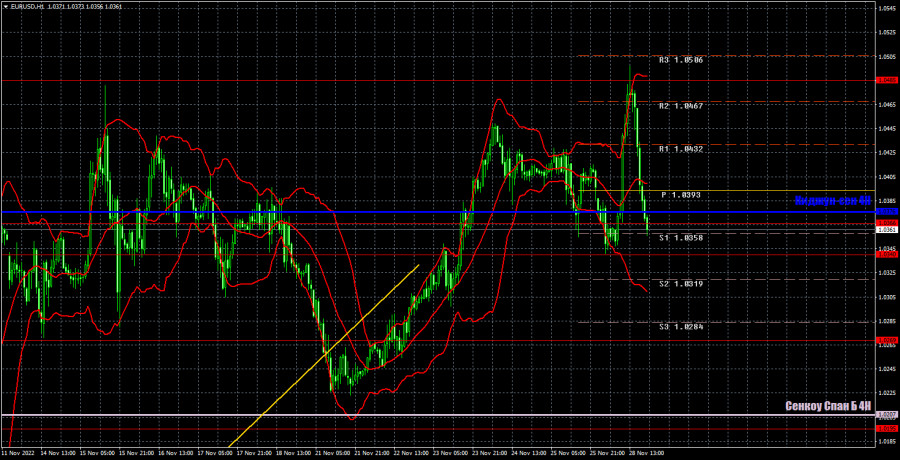 Lately, EUR/USD has shown absolutely inadequate movements on the one-hour chart. It still hasn't started a downward movement even after it crossed the ascending trend line. Yesterday, the pair updated its last local high, but failed to break through the important level of 1.0485. And now it may start a strong bearish correction, which we already expected a week ago. On Tuesday, the pair may trade at the following levels: 1.0124, 1.0195, 1.0269, 1.0340-1.0366, 1.0485, 1.0579, 1.0637, as well as Senkou Span B lines (1.0207) and Kijun Sen (1.0376). Lines of the Ichimoku indicator may move during the day, which should be taken into account when determining trading signals. There are also support and resistance levels, but signals are not formed near these levels. Bounces and breakouts of the extreme levels and lines could act as signals. Don't forget about stop-loss orders, if the price covers 15 pips in the right direction. This will prevent you from losses in case of a false signal. On November 29, there are no important events planned in the EU and the U.S., but Monday showed us that the pair is ready to move in a volatile manner even without them.

793
Can't speak right now?
Ask your question in the chat.