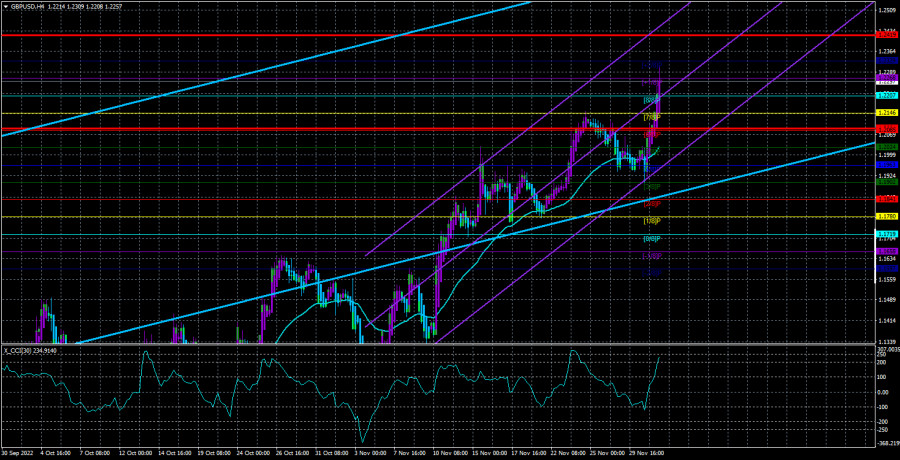 The GBP/USD currency pair increased by at least 350 points on Wednesday and Thursday. You only need to know that market participants were merely purchasing pounds and selling dollars. We have already mentioned that the market has been building up short positions for almost two years and that the pair's growth may be a simple profit-taking move. However, from our perspective, everything has a limit. In a few months, the pound has increased by 2,000 points. In other words, it expands faster than it did when things were "troubled." The current state of affairs in the foreign exchange market is shocking. Considering only the most recent global cycle, the dollar has been rising against the euro and the pound for two years. However, the dollar is now falling at the speed of light and seemingly for no reason. Reiterating that technical corrections occur and should occur on the most senior TF, all the upward movement in recent months might be a correction in the technical trend. However, such a movement appears merely disheartening over several days or weeks.

For instance, the US dollar dropped by 240 points yesterday, even before releasing the most significant ISM business activity indices in the US. Because there was only one round of downward movement on Wednesday, it only dropped by 100 points. I would like to find at least some justification for purchasing the pair on Wednesday night, then on Thursday. As a result, the pair's attempt to consolidate below the moving average was unsuccessful. The upward trend is still present, the pound is expanding rapidly, and all indicators across all timeframes point upward. What else would be required to trade profitably? In addition, we concur. You will recall that we have always emphasized the importance of concrete technical signals supporting any fundamental hypotheses. Such theories shouldn't be tested if there are no signals. And so we find ourselves in a paradoxical situation where technology says "up," the foundation says "it's time to adjust," and "technology" also allows correction, but we only see growth.

Is it reasonable to anticipate anything from non-farms?

In theory, given how the market behaved this week and the week before, there is absolutely no reason to believe that today's reports on the unemployment rate and non-farm payrolls won't have some effect on the market's "bullish" sentiment. Remember that there aren't many terrible factors that can cause the dollar's value to drop by three digits. So what could be the cause of reports on non-farms and unemployment, even if they are much stronger than expected? A 100-point adjustment? Both the dollar and the pound have already been oversold. A technical correction could start at any time. But that's the issue—it gets much harder to predict when the equipment and foundation completely misalign.

A correction is imminent because the pound has increased by 1100 points in the previous month alone. It obviously can expand at a different rate in December. However, we did not observe a decline in the pair when there were specific fundamental and macroeconomic reasons for sales. When these grounds are out of sight, we will witness a strong fall following the law of meanness. Therefore, it is necessary to treat all news, reports, and events with extreme caution regardless of their nature.

The only thing left to say is that there were no significant events this week in the UK, so everything that occurred on the foreign exchange market had an entirely American foundation. Even theoretically, the weakening of the pound sterling was impossible because the only report on business activity in the manufacturing sector received from the UK was once again below the "waterline" of 50.0. The only thing left for us to do is make it through Friday, observe the strange movements again, and wait for the infrastructure and machinery to catch up, at least somewhat. 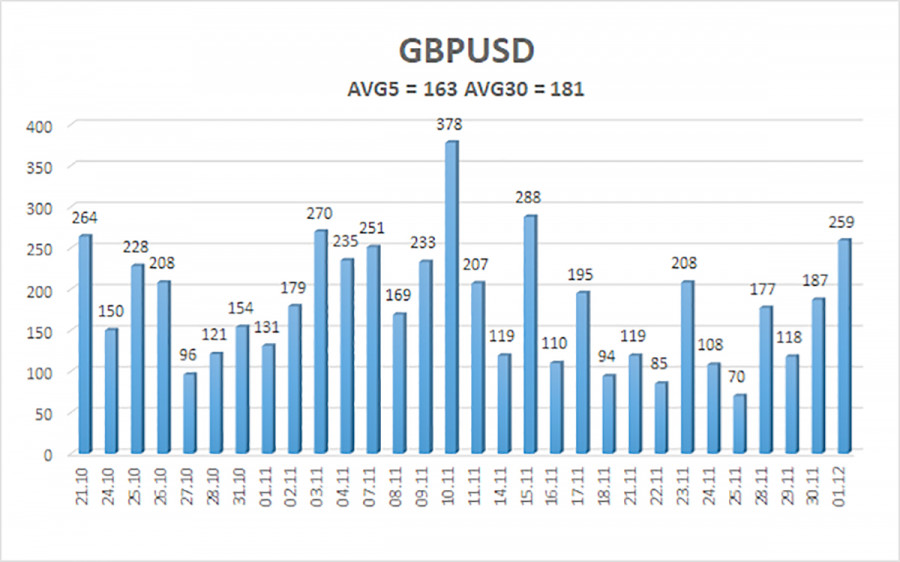 Over the previous five trading days, the GBP/USD pair has experienced an average volatility of 163 points. This value for the dollar/pound exchange rate is "very high." As a result, on Friday, December 2, we anticipate movement that is constrained by the levels of 1.2091 and 1.2419. The Heiken Ashi indicator's turning downward indicates a new phase of the corrective movement.

In the 4-hour timeframe, the GBP/USD pair resumed its upward trend. Therefore, until the Heiken Ashi indicator turns down, you should maintain buy orders with targets of 1.2329 and 1.2419. When a price is anchored below the moving average, sell orders should be placed with targets of 1.1902 and 1.1841.