There was no significant decrease in trading activity over the weekend. Following the results of Saturday and Sunday, Bitcoin formed two equivalent candles, but the bulls had the final say. Having swallowed Saturday's fall with Sunday's growth, buyers developed an upward movement on Monday.

Bitcoin reached the $17.3k level, where it ran into the $17.3k–$17.6k important resistance level. The total increase in Bitcoin capitalization over the past seven days amounted to 6.8%, and over the past 24 hours, about 2%. The initiative is still on the side of the bulls and is supported by a fundamental positive. 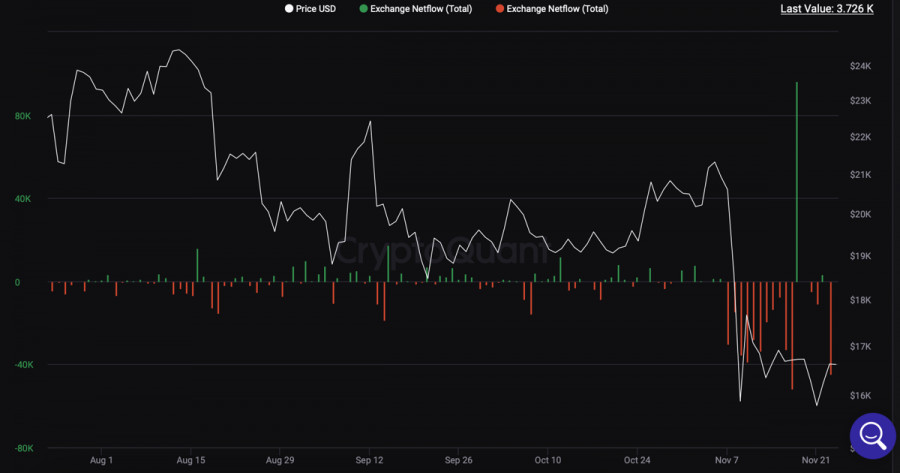 The Fed's policy is gradually easing, and markets expect a key rate hike of only 50 basis points. Thanks to this and the proximity of the Christmas holidays, the stock market is growing, which is gradually resuming the correlation with BTC. 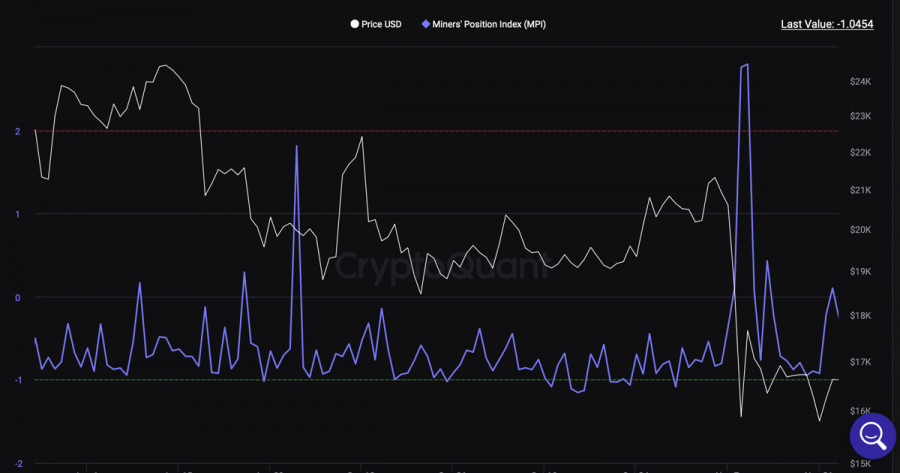 At the same time, the situation remains tense with mining companies that have suffered record losses over the past seven years. Despite this, most of the BTC volumes that end up on the market are absorbed by long-term investors. This can be seen from on-chain indicators, and the weakness of the bears in the current period of price movement.

After the crash of FTX, the correlation between Bitcoin and stock indices was completely broken and reached the level of -0.52. Subsequently, the indicator began to recover, and by the end of last week it reached a level above 0.70.

After the weekend, when the US markets were closed, we again see a correlation. Given the lack of trading activity over the weekend, we should most likely expect an upward movement in the SPX and other stock indices. 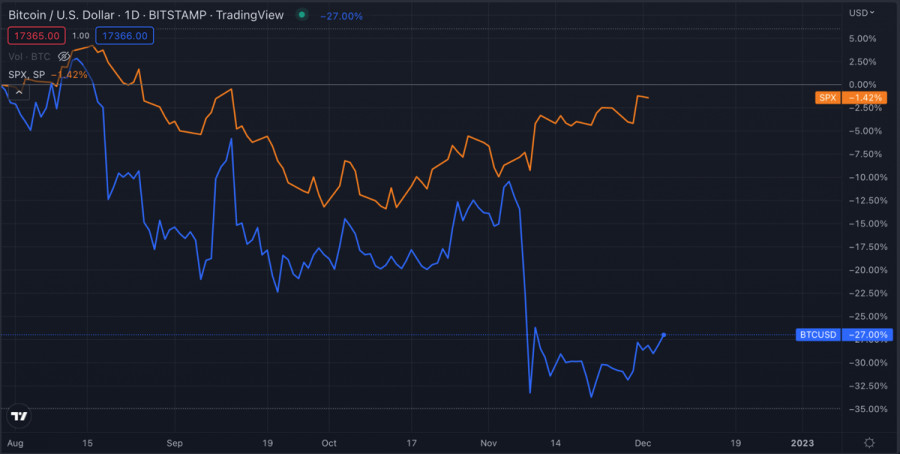 However, do not forget that SPX and BTC strengthen the correlation during a downward trend. Given that Bitcoin has crept up to a difficult resistance level, there is reason to believe that it is the cryptocurrency that will repeat the local downward maneuver of the stock index.

Bitcoin is in the final stages of breaking out of the $15.6k–$17.5k triangle. Having reached a local bottom on November 21, bullish activity followed, thanks to which Bitcoin maintains an upward direction for the third week in a row.

The asset is gradually approaching the monthly high, which is a strong resistance area. The cryptocurrency reached the $17,350 level, where it faced increased selling pressure. Up to $18.1k, Bitcoin will face increasing sales volumes. 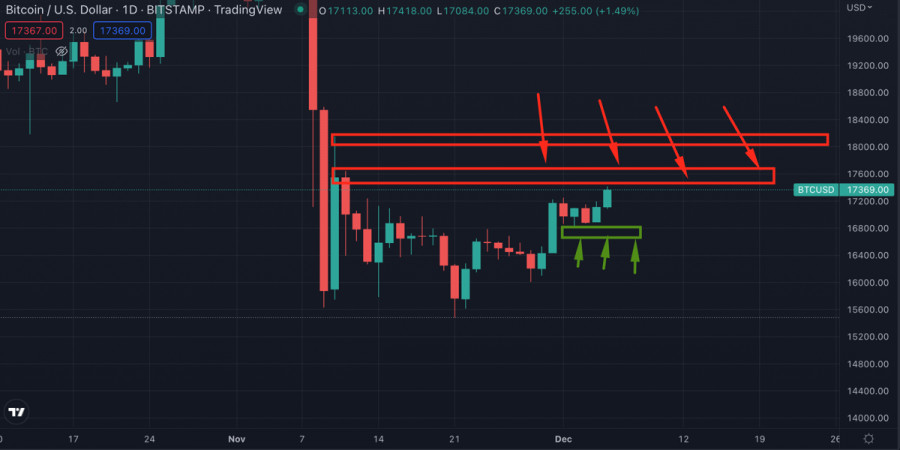 This could provoke a local price pullback, and in order to maintain the upward potential of BTC, it is necessary to hold the $16.7k-$16.9k level . Otherwise, sellers will take advantage and send the price to retest $16.3k.

Technical metrics point to the continuation of bullish sentiment and the continuation of the upward movement of BTC/USD. The RSI remains bullish, but the stochastic oscillator has reached the overbought zone, which may indicate the need for a local pause. 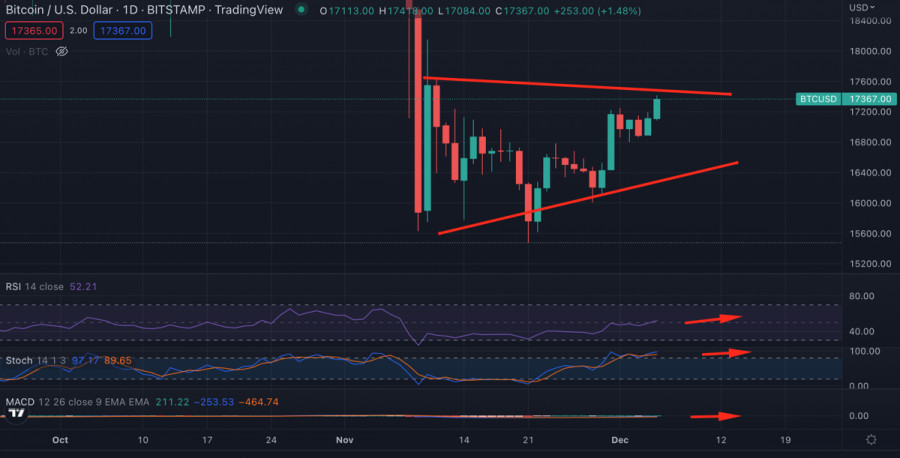 The MACD indicator continues its upward movement towards the zero mark and approaches the green zone. This suggests that a possible bullish peak is yet to come. Given a certain overbought stochastic, we should expect a local price decline before continuing the upward movement.

Technically, investors continue to actively buy the $15.5k bottom. In the coming days, it is important to monitor the dynamics of on-chain indicators of trading volumes and active addresses. If the indicators grow commensurately with the price increase, then this will be a signal of the strengthening of the bullish trend. 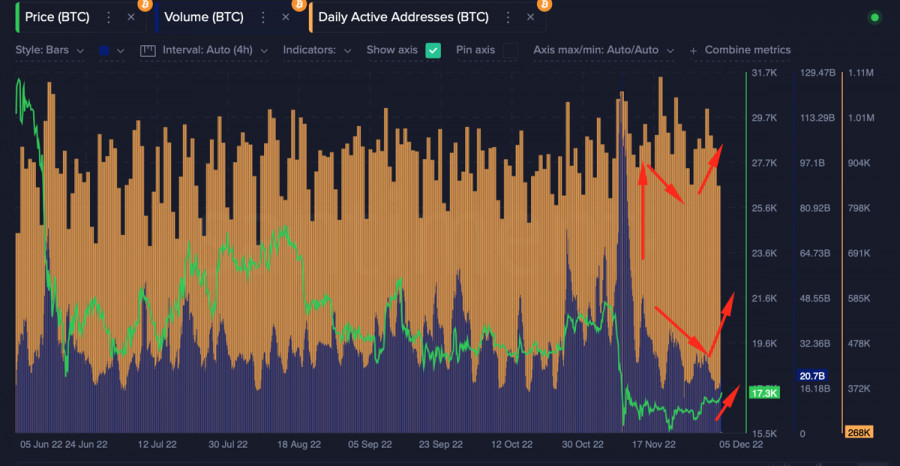 At the same time, it is important to understand that the fundamental background can play both for and against the upward movement. The market is sensitive to any macroeconomic events, as well as fluctuations in the stock market. Therefore, it is important to take into account the combination of technical and fundamental factors when actively trading BTC/USD.

1213
Can't speak right now?
Ask your question in the chat.