Technical Indicator DeMarker (DeM) is based on the comparison of the current and previous bars maximums. When the current maximum is situated above the previous one, the difference between them is registered. When the current maximum is situated at the same level with the previous one or above, zero volume is registered. Then, values received for a certain period of time are summed up, the result is a numeral indicator DeMarker which is divided by the same value plus the sum of differences between price minimums of the previous and current bars. When price minimum is above the previous level zero level is fixed.

The usage of the longer periods for calculations lets catch the long-term tendency in the market development. Indicators with the short periods let enter the market with the least risk and plan the moment of the deal making so that it will be in the tide of the main tendency. 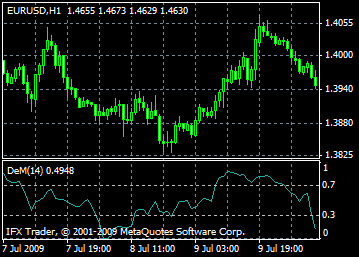 The value of the DeMarker for the "i" interval is calculated as follows:

The value of the DeMarker is calculated as:

N - the number of periods used in the calculation.