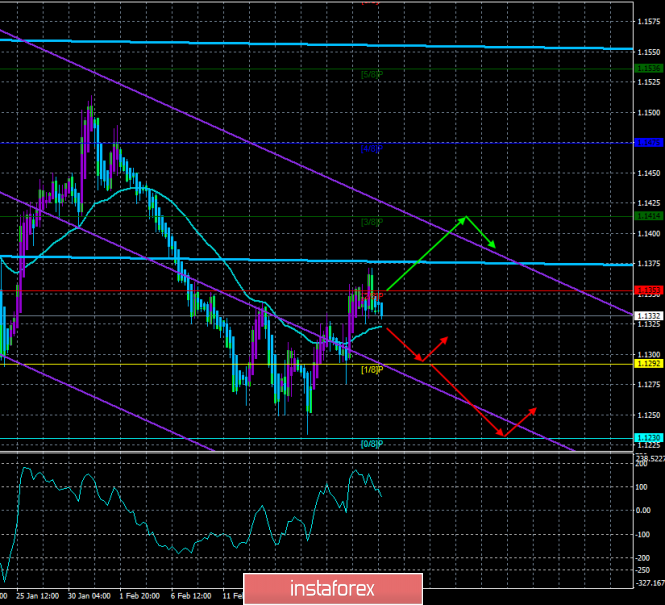 The EUR / USD currency pair on the eve of the publication of the Fed's protocol on February 20 made a slight jerk up but returned to a moving average line after this event. As we expected, there was nothing important in the protocol. In short, the Fed may continue to raise rates this year, if, for example, inflation, which is now in a "muffled" state, will appreciate the acceleration. At the same time, monetary tightening is not possible. Further, many Fed members are confident that in the near future, they should provide a plan for the completion of the reduction of the balance of the Fed. The main idea is not to take any rash steps, but to respond to the economic situation. There is no talk about rate cuts. The main threat for 2019 lies in the plane of trade relations with Europe and China. Thus, despite a small surge of emotions yesterday, it cannot be said that the market reaction was strong - the volatility remained at the same low level. From a technical point of view, the indicator Heikin Ashi began to paint the bars blue, which signals a correction. Therefore, the weak upward trend in the instrument is maintained. Today in the European Union, preliminary values of indices of business activity in various fields will be published.

The EUR / USD currency pair has begun to adjust. Therefore, it is recommended to open long positions after turning the Heikin Ashi indicator to the top with the target of 1.1414. There is a possibility of the pair returning to the area below the moving average.

Sell positions are recommended to open after the price is fixed back below the moving average line. In this case, the tendency of the instrument to change to downward, and the first target will be 1.1292.

The younger linear regression channel is the purple lines of the unidirectional movement.